The Best Christmas Gift Ever: Finding Blessings in Challenges
By Emmanuel Dagher 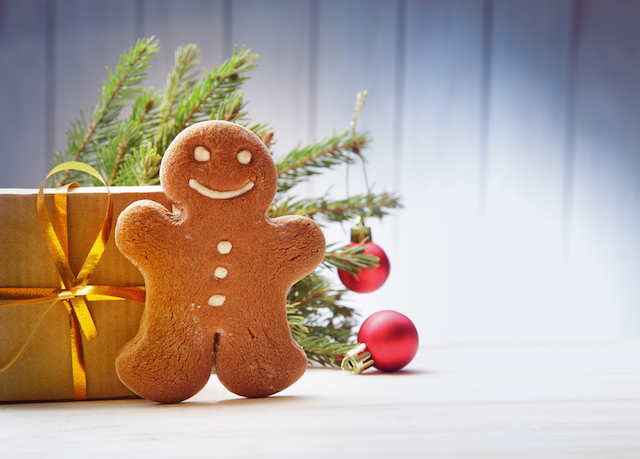 “There is no such thing as a problem without a gift for you in its hands.” ~Richard Bach

Recently, I began reflecting on a time in my life I hadn’t thought about in a while.

I began remembering the time when I was five years old and staying with my great aunt and uncle, because the town my mom and I lived in was under siege and unsafe.

Our town was experiencing some of the heightened turbulence that became quite common in many towns and cities during the Lebanese Civil War, which lasted from the mid-seventies to the early nineties.

Having the opportunity to stay with my great aunt and uncle for a little while was a treat because they lived in an area that was a bit safer.

However, I was still uneasy, because my mom could not stay with us due to work commitments.

Though she would visit us as often as possible, that Christmas she ended up being stuck at her workplace for days longer than she had intended because the route between us had become unsafe to travel.

This would be the first time in my five years that I would be without my mom for Christmas. Of course as any child would, I cried over it a bit, and eventually was assured that everything would work itself out.

Christmas Eve arrived, and my great aunt and uncle invited all their friends and family over to celebrate. I had honestly never seen anything like it before! All the food, the music, the people, the tree, the multi-colored wrapped presents—it was sensory overload!

It was as if magic was happening right before my very eyes.

I remember sitting quietly in the corner trying to make sense of everything I was seeing, because up to that point it had always been just my mom and me, celebrating on our own in a much less extravagant way.

After warming up a little bit to the guests, I sat down at one of the longest dining room tables I’ve ever seen, even to this day.

“Are you going to start eating, child?” one of the guests sitting next to me asked.

I nodded, and she filled my plate up with foods made up of exquisite colors, flavors, and textures, the likes of which I had never experienced before. I can remember actually pinching myself to make sure I was not dreaming.

Later in the evening, we heard sounds outside of the front door that resembled bells. The adults all started to clamor and make a big spectacle to encourage my great aunt’s daughter and me (the only kids there) to get excited, because someone very special had arrived.

We then heard loud knocks at the door. It was Santa Claus!

In Lebanon, Santas look less like American Santas with a white beard and jolly face, and more like a Halloween character, because they wear a plastic Santa Claus mask

I remember being frightened of this Santa, but one of the adults in the room assured me he was safe and friendly. I was still a little hesitant, but soon warmed up to him.

Now that Santa Claus had arrived, it was time to open up the shiny, packaged presents. I think there must have been more than a hundred presents under the tree.

One by one, Santa passed out all the presents. Everyone sat in a circle, and everyone opened their gifts, one person at a time.

It was such a lovely sight to see each person receiving their gifts. And it was especially fun to see my cousin, who was the same age as I was, so full of joy with each present she opened.

It was also funny to see how impatient she would get, because she had literally received forty to fifty gifts, and had to wait her turn to open them.

As the last present was opened, I felt like I was in a euphoric, almost dream-like state after all the joy I had witnessed.

While I was in this state, one of the adult guests turned to me, and with what seemed to be a particularly loud voice, asked, “Where are your gifts?”

I remember explaining to him that my mom and I usually drew pictures and sang songs as our Christmas gifts to each other, but that she was at work right now and would be coming back for me soon.

I also shared that I was happy just watching others celebrate, because I had never seen such magic before.

The guest looked a little confused by my answer, and then announced to everyone what had just happened: that I was the only one, and a child, mind you, who had not received a gift.

Although I now know that the guest meant well, his announcement shifted the energy of the room from one of joyful celebration to one of utter silence, where all eyes were looking at me with sympathy.

The adults’ comments poured in: “Oh, how sad!” and “I feel so bad for him!” while others asked me if I was okay.

I wasn’t really sure why everyone’s behavior had changed so quickly, but I do remember wondering if something was wrong with me because of what had just happened.

A few adults hugged me and said things like, maybe I needed to be a better boy in the coming year so that Santa wouldn’t do that again.

And then came the comment that I now consider one the greatest gifts I’ve ever received.

“You’d think this child was invisible, the way he was forgotten!” one of the adults stated.

In that moment, I excused myself and walked to the bathroom, while still keeping a smile on my face, as though none of the comments and behaviors in the room had fazed me, even though inside I felt quite the opposite.

As I think back now, I really admire how that little kid in me was able to keep it together the way he did.

While in the bathroom, after processing through the embarrassment I had just experienced and feeling sorry for myself, I remember having a deep inner sense that one day when I was grown, I would understand why all of this had happened.

Flashing forward to present day, I wondered why this specific memory kept coming up in my awareness.

Was it because of the holidays? Why had it not come up much before? So I meditated on it, and asked the Universe, what purpose did this memory have in my life, at this present time?

Within about a minute, I received the following message:

“Because of this and several other similar experiences you have had in your life, where you were made to feel invisible and as though you did not exist, you received one of your greatest gifts in life. You received the gift of compassion. Not to be mistaken with sympathy, which you personally experienced on that Christmas Eve, where all the guests felt sorry for you.

“You received the gift of being able to connect with the true essence of a person, where you know only wholeness resides.

“If you notice, you have since made it your greatest priority in life for others to feel seen, heard, acknowledged and understood for who they really are. So although your gift that Christmas Eve didn’t come in a shiny wrapped package, you truly received the greatest gift of all.”

After receiving this message, I instantly felt a joy rise up in my being and felt as though I was lit up like a Christmas tree. An epic healing had just taken place within me, and a full resolution had been made.

Looking back, that Christmas Eve really did bless me with one of the greatest gifts one could ever receive. It led me down a path to where I was able to connect with people on a heart-to-heart level. What a gift! For that, I am forever grateful.

I share this experience with the hope that you too are able to recognize the gifts you’ve been blessed with, even if they were birthed during times of great challenge.

As you look back over this past year, you might be wondering what gifts could possibly be hidden inside times of loss or struggle.

But there is always a gift. A journey of physical pain can lead to knowledge about healing. Financial hardship can lead to an understanding of true abundance. An emotional loss can lead to the realization that love is something we create within ourselves.

Whatever challenges you’ve faced, take a moment and ask yourself, “What gift have I gained from this experience?”

You may have many gifts that lie unseen, waiting for you to claim them. Tap into the wisdom that will show you those gifts.

I know there are great blessings there, waiting for you to open up and receive them.

Emmanuel Dagher has been recognized internationally as a Modern Day Mystic, Humanitarian, Transformation Specialist, and Visionary Healer for over ten years. He has dedicated his life helping people remember who they are at their core and realize their full potential as amazing divine beings of love. Visit him at emmanueldagher.com and on Facebook.

How to Reduce Holiday Stress by Setting Strong Boundaries