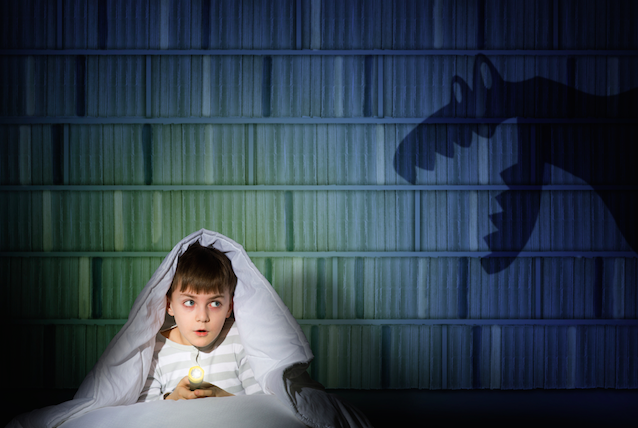 “Fear keeps us focused on the past or worried about the future. If we can acknowledge our fear, we can realize that right now we are okay. Right now, today, we are still alive, and our bodies are working marvelously. Our eyes can still see the beautiful sky. Our ears can still hear the voices of our loved ones.” ~Thich Nhat Hanh

I lay in bed staring into the darkness feeling physically ill with an acute sense of anxiety the like of which I hadn’t experienced in quite some time.

It felt like I had a soccer ball sized, black, dense object consuming the entire center of my stomach, causing nausea to ripple up into my throat uninvited.

I knew it wasn’t that hot, with the air conditioning on full, yet my legs were sweating, as was the back of my head. I could feel the damp pillow under me and the bed sheets sticking to me whenever I moved.

I cursed my own stupidity and replayed the previous week’s events over and over again in my mind as though under some illusion that the more I did this the easier things would become. As a coping strategy it wasn’t one of my proudest moments.

You may think I’m describing some event from my dim and distant past. When the high stress of working in big-ticket sales would cause me endless sleepless nights as I fretted over deals missed and even deals made that may go wrong.

But this was last month.

Wind back in time to April with tax day looming. After I forgot to send some bank statements to my accountant she had to file for an extension to help avoid a fine from the IRS.

I had put aside some money based upon what my tax bill was last year with a little bit extra. I called my accountant a few weeks later and asked her if she could estimate the amount I would owe.

In fairness to her she was reluctant to do so, but the figure she gave me after much prompting had me punching the air in delight, imaginary high-fiving my dogs, and grinning like a demented Cheshire Cat. It was way lower than I anticipated.

Shortly after, we got the confirmation that our best friends were coming over to stay for two weeks later on in the year. It was going to be the first time they’d visited in almost five years and to celebrate I suggested we go on a five-day Caribbean cruise.

They agreed and shortly after everything was booked and I was chilled and thrilled. Then it all went wrong. Horribly wrong.

No more than forty-eight hours later I got an e-mail from my accountant saying the final tax bill wasn’t what she had advised, but eight times higher.

How could that be? I called her and she apologized profusely, but it was what it was and there was nothing more she could do.

As I lay in bed that night I was cursing myself for rushing to book the cruise and for not making higher regular payments to the IRS as I had been advised.

I have said many times, “I have no sympathy with people complaining about their tax bill, as they can’t charge you for what you haven’t earned.” In the early hours of the morning this was the biggest stick I had to beat myself with, and trust me, it was a very big stick.

Stress, fear, and anxiety are all much the same thing. They all stem from a feeling that we’re not in control of life’s events. This stimulates the fight, flight, or freeze reaction triggered by the sympathetic nervous system, courtesy of the Limbic System in the brain.

There was no way I could fight the IRS and I’m not sure where I would fly to, so I lay in bed frozen with anxiety.

After several hours lying there listening to my own self-recrimination, I remembered to tell myself that it was okay to feel anxious under such circumstances. That it was a perfectly natural response to a negative event, and it was just a feeling.

And fear is only a feeling, albeit a powerful one. There is no thing called “fear.” You cannot touch it, smell it, see it, or taste it. As with any emotion, you can only feel it.

Also, we cannot experience fear if we are truly and congruently living in the present moment. Fear is always the mind projecting an inability to cope with a future event or situation.

It’s not real per se. Fear itself cannot hurt you. It’s how you respond to the perceived threat that hurts you.

Fear has a valuable evolutionary purpose in the survival of the human species because (for the most part) it stops us doing things that can threaten our health, safety, and well-being.

However, the worst strategy in dealing with fear is to fight it by resisting. Or to feed it by seeking out the worst possible scenarios to relatively benign situations.

I was doing both. I was feeding it by dragging myself through an imaginary court of stupidity in my own mind. At the same time I was also resisting it by telling myself I was being stupid to worry about such a thing.

Finally common sense kicked in and I decided to observe it, to be curious about it and to drop the futile resistance that was only giving it more strength.

I thanked it for its concern and reminded it that between the two of us we had dealt with every single-issue life has thrown at us for over half a century, and that we would deal with this also.

I could feel the black ball start to slowly melt and the nausea subside.

You too have dealt with everything life has thrown at you to date otherwise you wouldn’t be reading this post.

There is nothing in your life you haven’t coped with and there is nothing you won’t cope with. Sure, there will be times when it doesn’t feel like that, when the fear demon is whispering in your ear that things won’t be okay and you start to let it take control.

But, he is mistaken and the only power he has is the power you give him. Just hug him (or her) and say with sincerity, “Thank you for looking out for me. I know you have the best intentions, but everything will be okay. I promise.”

Love Is In the Little Things

When Everything Goes Wrong: Getting Through One of Those Days

Honoring Our Inner Voices to Make the Right Choices for Us