Love Is In the Little Things
By Holly L. Pender 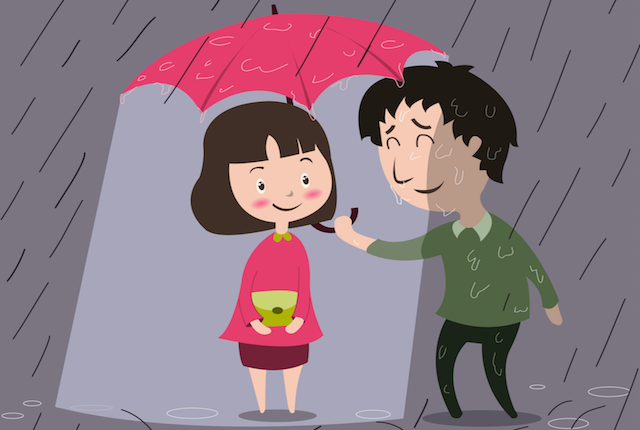 “Enjoy the little things, for one day you may look back and realize they were the big things.” ~Robert Brault

Valentine’s Day has never been a big deal to me. It always felt commercialized, so forced. I’ve never felt I needed Hallmark to remind me to do something special for my husband, or vice versa.

This certainly isn’t a reflection of how we felt about, treated, or appreciated one another; it just wasn’t a priority to us.

In our more than seventeen years together, some years I would receive a card, flowers, or chocolates, but other years it would pass by like any other day. I’ll admit on a couple of those occasions I felt a little hurt, even slightly unappreciated.

In November 2009 my husband Bill was diagnosed with an aggressive form of leukemia. It was a total shock, as cancer always is. Breaking the news to our three children was almost as devastating as the diagnosis itself.

Bill was a very involved father, never missing a special event or game. He coached our ten-year-old son’s hockey team at the time. His life was his family.

While Bill had a very successful and demanding career as an electrical engineer, he always put us first. Sometimes that meant staying up until 3am to do work, just so he could make it to our daughter’s soccer game.

After Bill was admitted to hospital, his concerns were still about the kids and me. He was actually worried that I had to put out the garbage myself and shovel the driveway. He liked taking care of things like that. He was always trying to make things easier for me.

During Bill’s time in hospital we did a lot of reminiscing. We laughed, we cried—more laughing than crying. Bill and I shared an unusual sense of humor, sometimes making light of things that weren’t funny. It was our little way of coping.

Life with three kids is busy, especially without any family nearby. Couple time was hard to come by, and as sad as our situation was, it gave us a chance to reconnect.

Bill began an intense four-week cycle of chemotherapy. The first cycle would prove to be unsuccessful, and a second cycle was also a failure.

On New Year’s Eve, Bill’s hematologist told us things didn’t look good. The doctors said they could make one more attempt at a very risky, experimental treatment. We decided to go ahead with the treatment, despite the risks.

A few weeks later Bill developed fungal pneumonia, a very dangerous situation for someone with a compromised immune system. On February 13, Bill’s doctor asked to speak with me privately. I was told he was dying, maybe only having a week or so left.

I was heartbroken and devastated. What was worse, he didn’t know. We decided it was best not to tell him since he was already so sick.

I spent that night at his bedside, and the following day he deteriorated quite quickly. He was struggling to speak and breathe. The medical team increased his medication to make him as comfortable as possible.

Bill remained in and out of sleep that day. He briefly woke up and asked me, “Am I going home tonight?” I said,  “No, not tonight honey.” He responded, “Wouldn’t it be cool if I went home tonight?”

I told him I loved him, and he whispered the same. I spent the rest of the night holding his hand while he slept. Then it hit me: it was Valentine’s Day. The realization brought me to tears, tears I had been fighting back for weeks.

I didn’t give a damn about roses, chocolates, or jewelry. I just wanted my husband to live. He was only forty years old and I was thirty-seven. We had so many things we wanted to do together as a family and a couple, so many dreams for our future.

I didn’t sleep a wink that night; I just held his hand and prayed. The next afternoon while standing at Bill’s bedside, I placed my hand on his chest to feel his heartbeat. Moments later it stopped. He was gone.

It hasn’t been an easy seven years since Bill’s passing, but I am grateful we had the opportunity to say what we needed to say and have a real understanding of how much we truly appreciated each other.

Now when Valentines Day rolls around, it’s a reminder of how life’s tender moments have the most impact on us.

It’s the feeling of contentment that I miss most. I had no idea what an underrated emotional state it really is. We don’t need a dozen roses once a year to make us feel loved. It’s the little, everyday things that give us that feeling… even taking out the garbage.

Holly L. Pender is a proud mom of three, who became an only parent after losing her husband in 2010. Born and raised in St. John’s, Newfoundland, she has lived in Ottawa, Ontario since 1995. She strives to live in the moment and uses humor to get through life.

Honoring Our Inner Voices to Make the Right Choices for Us