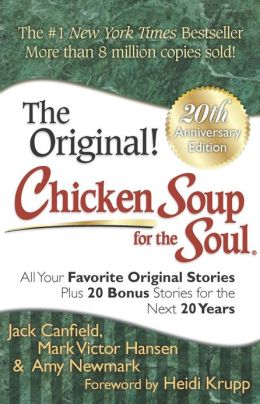 Update: The winners for this giveaway have already been chosen. The winners:

If you enjoy touching, uplifting stories, you’ve likely stumbled upon the Chicken Soup for the Soul series at one time or another.

What started with one book two decades ago has expanded to more than 200 titles, providing motivation and inspiration to millions of people of all ages, from all over the world.

The newly released 20th anniversary edition includes all of the original stories from the first book and 20 new ones from writers including Deepak Chopra, Dr. Mehmet Oz, don Miguel Ruiz—and me!

When publisher Heidi Krupp-Lisiten contacted me with this opportunity, I was honored and beyond excited. And now I’m excited to share it with you.

You can enter until midnight PST on Friday, August 23rd.

Learn more about Chicken Soup for the Soul, the 20th Anniversary Edition, on Amazon.