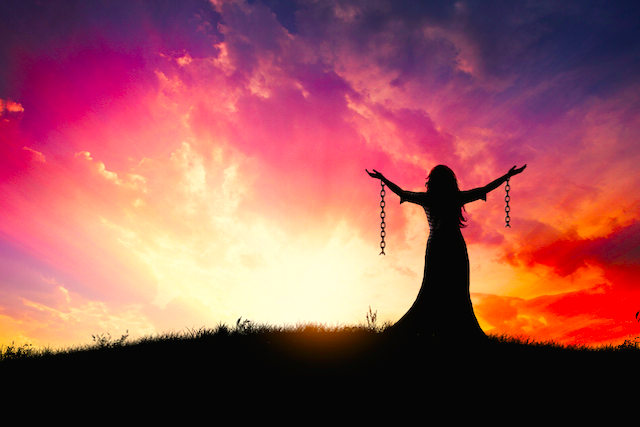 “Authenticity is the daily practice of letting go of who we think we’re supposed to be and embracing who we are.” ~Brené Brown

I happened to catch the last scene of the movie Moonstruck on TV a few nights ago. The scene marks the happy resolution of various plot threads, and yet I felt as if I was witnessing the sinking of the Titanic.

It was like watching a demonstration of what I have come to understand as the two ways of being in this world: dominating vs. accepting, narcissism or bullying vs. kindness.

Having come from a narcissistic family myself, it felt as if the movie was peering straight into my soul.

In the movie, Loretta Castorini is engaged to Johnny Cammareri, an aging mama’s boy who never married, out of ‘consideration’ for his ailing mother in Sicily.

In this scene, he bursts in, announcing that he can’t marry Loretta because it would kill his mother, and asks for his engagement ring back. In the next moment, Johnny’s brother, Ronny, promptly proposes to Loretta, borrowing Johnny’s ring to seal the deal.

The movie centers on Ronny and Loretta, yet seeing the last scene isolated from the rest of the movie drew me to Johnny’s experience.

There he was, controlled by his mother long-distance from Sicily, giving up his marriage in deference to his mother’s script about who he needed to be in order to support her needs.

The confusion on Johnny’s face as his brother claims the prize of Loretta’s hand in marriage is heartbreaking. Johnny isn’t quite sure what is happening, and yet he dare not question his mother’s love, nor break free of his supporting role in his mother’s drama.

His life has been spent, and, unless he wakes up, will continue to be spent, in service to her, at a great cost to him.

I see myself in Johnny. I was well into middle age before I was able to break free of my father’s domination of my life, and I suspect that, like me, many people delay the beginning of their own lives out of misplaced fealty to the stories their parents scripted for them.

For years, whether rebelling against my dad’s criticisms or craving approval from outside myself, I had, on a deep level, ceded the central role in my life to my dad.

Whether we were close or miles apart, communicating or no contact, he was the sun, and I was orbiting his solar system. This is exactly how he wanted it, and I fell into place within the structures and systems of his universe.

There is so much truth in humor. Johnny’s mother’s threats are played for laughs, and yet they are more than mere melodramatic manipulation.

An acquaintance of mine energetically supported her narcissistic mother for decades. When she became aware of the family dynamic, she chose to withdraw her energetic support of her mother, and for the first time in her life, focus on herself as an individual.

The potentially intimidating part is that her mother actually became ill.

This is not to imply that my acquaintance should have continued to support her mother, it is simply to say that the energetic connection is real, and removing it, as necessary as it may be, is like removing a crutch someone has grown dependent upon.

It sparks an enormous upheaval and rebalancing for both parties, and yet it must be done in order to achieve greater health and freedom on both sides.

The saddest part for children of narcissistic parents, and also for partners of narcissists, is losing confidence in our own authentic feelings, hopes, and dreams. The narcissist’s insistence upon pretense, and the demand to suppress authentic experience can be very painful.

The younger brother, Ronny, was lucky to have been the black sheep of the family; at least he was distanced from his mother’s demands. Nonetheless, he, too, was damaged.

When we first encounter him in the basement of his bakery, he looks like a hurt animal hiding in his lair. He has a wooden prosthetic hand, as Loretta says, “like a wolf that has chewed off his own paw to escape a trap.”

To narcissistic parents, a child is not a full-fledged individual, but rather a character in their story, and the roles they offer their offspring are severely limited.

Whether a “golden child” who can do no wrong, or the “failure” who can do no right, in either role the child will feel that he must perform in order to try to keep or win the parent’s love.

This is not love at all, but rather a form of abuse, which is worse for being invisible to all but those directly involved. The child is asked to give up her own feelings, thoughts, and needs in order to support the parents’ version of reality.

The child, meanwhile, resists facing the direness of the situation—the truth of a manipulative or even an unloving parent—for she intuits that she needs her parents’ love in order to survive.

At the same time, she may feel excruciatingly uncomfortable living inside the parents’ stories. Like Johnny, she may end up not knowing who she really is and what she really wants, having given up her own thoughts, emotions, and needs for so long.

In the movie, neither brother escapes unscathed: Johnny, the golden child, was hobbled, tied to his mother’s apron strings, and Ronny, the black sheep, was also wounded and cut off from the rest of humanity.

Like so many rebels among us, Ronny finds solace in the arts, in his case, opera. As a child, my passion for dance sustained me. It was an outlet for self-expression, and an opening for the magic I needed in order to survive.

Funny to speak of all this in the context of a romantic comedy, yet perhaps the power of the story stems from its basis in profound truth.

At the end of the final scene, Johnny sits alone as the family excitedly gathers to toast the new couple. He looks stunned, isolated, and lost amid the celebration. Then the grandfather approaches Johnny and extends a glass of champagne, offering the last line in the movie: “You’re part of the family.”

And with that, Johnny is embraced in the warmth of the family, and I burst into tears. How different is this warm embrace compared to the demands of the narcissistic parent.

Johnny is played as a buffoonish character, and the audience is fully rooting for Ronny and Loretta. Yet even clownish Johnny is embraced.

This is love. This is real acceptance.

This is the tenderness of the movie. This is its big heart, which is depicted, not just in the romantic passion of Ronny and Loretta, but more importantly, in the inclusion of Johnny in the celebration. As the credits begin to roll a toast is raised: “La famiglia!” To family!

This is the archetypical image of the loving family. And yet many of us did not experience that. And many of us hide a secret shame that our families aren’t like that. I know that I was deeply ashamed for a long time that my story wasn’t pretty like that, until one day I realized that it was not my fault.

On the day that I accepted my family as it was, and realized that I wasn’t responsible, and rejected the stories they told. On that day I reclaimed my right to my truth about what happened, what I felt, what I thought, and what I experienced.

Reclaiming our stories—our truth—is how we take our power back.

If any of this speaks to you, go watch Moonstruck. Johnny hasn’t woken up yet from the spell his mother cast over him. Ronny, with the help of Loretta’s love, breaks out of his hurt isolation and reclaims his life.

Wake up and face your truth. Sometimes facing the ugliness is the route we must take in order to reclaim our own beauty and power.

Bestselling author and life coach Reba Linker helps others walk the path of self-love to a happier, more fulfilled way of life. Reba is dedicated to the alleviation of suffering in the world. Reba’s books include Imagine Self-Love, The Little Book of Manifesting Big, and Follow the Yarn. Find her free gift for you at RebaLinker.com and join her FB group at facebook.com/groups/leadersinselflove/.