Courage Is Doing What You Really Want to Do, Even When You’re Scared
By Maj Wismann 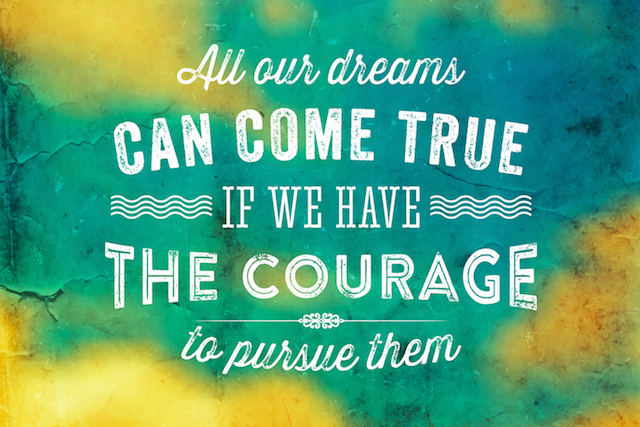 “Courage is not the absence of fear, but rather the judgment that something else is more important than fear.” ~Ambrose Redmoon

It’s only 9:25am on a Saturday morning and I feel myself welling up already.

I know this is difficult. This might just be some of the hardest stuff he’s ever had to do.

I’m there. On the sidelines, watching him.

I know him so well by now and all of his little “giveaways.” His eyes looking for mine. Fidgeting.

We’ve agreed that he’ll give it a chance because he really wants to do this. REALLY, REALLY. There’s no doubt about that.

But in order to get what he wants, he needs to show up. He needs to:

It’s not my job to ensure that he’s always inside his comfort zone and let him stay there forever.

It’s my job to be by his side every single time he exits his comfort zone, his safe place where everything is familiar, easy, and nice.

And then the tears come. A mix of being (oh-so!) proud and me seeing myself in him.

He’s running toward me. Throwing himself in my arms and cuddling up for a deep hug.

“Mom, I’m actually a bit scared. There’s so much noise and I don’t even know all of these other kids.”

He hugs me a bit harder. We sit like this for a few minutes until I feel him relaxing.

“All right, out you go. Just do another five minutes,” I tell him, cheering him on. “You can always come back for another hug, but we’ll stay here until the game finishes, so get out there and play.”

We had five lovely hugs in two hours and when we got in the car to go home, he was a very (very!) proud five-year-old boy.

“I sure did, sweetheart!”

Let’s wind back time seven days to when I was on a plane to London, feeling:

I was on my way to a big conference with a whole lot of people I didn’t know.

“Ohhhh, Mads, I almost don’t even want to go. Why does it have to be like this every time I do something new?”

I said this to my husband all snuggled up in a big hug before we got in the car for them to drop me off at the train station.

“It’s part of the game, baby. You know that. And Maj, remember that you feel this way every single time, and you go through with it and feel awesome. You feel proud for going through with it, for being brave and for learning all this new stuff.”

My husband is a very wise man.

Whether you’re five years old and about to play your first indoor football match, feeling super nervous but really wanting to learn how to play football, or you’re thirty-seven years and going to a big conference in London, about to meet some of the world’s leading teachers and have a private dinner with them, it takes courage.

Don’t let it fool you, though!

Courage is not the same as an absence of fear.

Courage is doing what you really want to do, even if it scares you to death.

Like this… me writing this blog post to you, telling you (very openly and honestly) about my own vulnerability; telling you how I feel when I have to do something I haven’t done before.

Courage is taking teeny, tiny steps in the right direction even though, sometimes, that really is freaking terrifying to do.

And sometimes you need to go back for another hug and just soak up a little bit more of that security before you make room for another tiny little step.

The courage that makes you an inch closer to where you want to be.

The courage that makes you, in one year, closer to the goal you visualized than you are today.

Courage is also required when you’re being honest in a relationship.

It’s being brave enough to say what your heart knows is right but you know might upset your partner.

Being brave enough to say what you’re missing the most even though you’re afraid that your partner might see this as criticism and might snap at you.

Saying the one thing that makes you so vulnerable and gives your partner the possibility of hurting you.

Courage is doing something you wouldn’t normally do despite the fact that you’d much prefer to do what you usually do.

It’s courageous to be brave enough to pursue something better.

It’s brave to put in a hardcore effort to get closer to your goal.

Whether it’s indoor football for juniors, a conference in London, a better relationship, a better job, or the courage to be bold enough to work on getting more quality into your life in general, it all requires courage.

And it requires you to be brave and that you act.

Just one step at the time. Teeny, tiny steps in the right direction.

You know what the next step for you is, right now. Take that step.

Yes, it’s a challenge. Be courageous!

Maj Wismann is a relationship therapist and mom of two sons. She helps women around the world get their love life back. Visit her at majwismann.com and follow her on Twitter and Facebook.