Finding Meaning in Tragedy and Moving on Stronger
By Nanette Stein 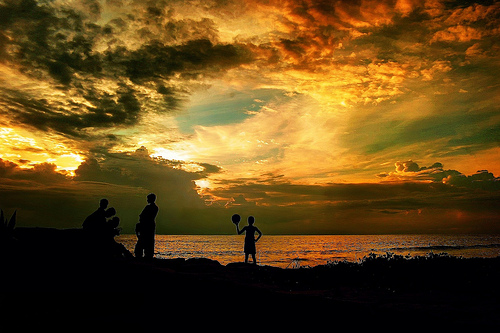 “Whenever something negative happens to you, there is a deep lesson concealed within it.” ~Eckhart Tolle

I’ve experienced a unique situation that has taught me a surprising lesson about the scope of the human races’ ability to choose love over hate, understanding over anger, and belief over fear.

I’d rather not have to tell a story like this, and my wish is that no one would ever have to learn lessons from an experience such as this. You see, my husband’s mother passed away just at the end of June.

But she didn’t just die of old age, or a sickness; she was only 61. She was washing her car in her own driveway and was forced into that car and taken. She was a victim of a violent crime; an unthinkable thing that you only hear about on the news.

The man that did this has been arrested, ending a nine-day violent rampage affecting many women and their families. Those families, including ours, await the long road ahead that comes with this type of devastation: evidence collection, investigation, trial, and sentencing.

Taking Steps in the Right Direction

My husband and I took his 79-year-old grandmother, his mother’s mother, and flew to where his parents and sisters live.

We were able to be with his father and sisters during this time, and we were able to be there for the beautiful funeral and memorial service. Many friends gathered around the family, as there are no blood-relatives in that area.

His mother and father are private people, so it was a small and intimate gathering, but much love was shared, and many friends came to the service.

I had expected there to be outrage, anger, disgust, even hatred for the man who did this, and possibly even for those of his same race, by some.

I witnessed none of those things. There was, of course, shock. There was sadness, remorse, and perhaps some initial anger.

I can’t sit here and say I know every emotion that went through each and every person. But I did not encounter outward aggression. I felt only love; a loving presence of unity and togetherness.

My husband’s mother was a kind and generous person. Small, delicate, and gentle like a little bird.

It is an outrage that this type of thing would ever happen to someone like her, to this family, especially right after my own mother passed suddenly and unexpectedly just three months ago, also not from natural causes, but an unnecessary prescription medication complication.

Even though these unbelievable events have shaken me to my core, I have such an unshakable peace about me.

I really thought that my husband would have a reversion to anger, that this would destroy all the changes he has gone through becoming this more enlightened person. I thought this event would destroy him in some way, but it hasn’t.

He is devastated over the loss of his sweet mother, but to allow such things to ultimately destroy you, well, that is not what she would want, and not what we “believe” in.

I’ve been struggling to realize what the lesson could be out of this. I tried all this time to figure out the lessons to be had out of my own mother’s untimely death, and I think I was getting to it.

Then this happened, and so suddenly. I was left quite confused. If there are lessons to be learned from tragedy, what is this lesson?

We are not always meant to know the why behind the wisdom.

Why would she have to go through such a horror for us to learn some lesson? Is there a lesson, or does none of it mean anything?

I’ve been over it and over it myself, and with my husband. We believe there is a reason for everything. I know it soundS so cliché, and I hate cliché’s, but we truly do believe that there must be something we are to gain out of this tragedy.

I don’t know why his mother had to succumb in this way or what the exact reasoning is, but I do know we are all connected, and there is some reason behind all of what has happened to my family over these last three months, and there has been an avalanche of events, believe me.

Some have said to me, “When it rains, it pours.” This may be true, but I’ve always had faith that everything would be okay.

I can tell you what I feel we’ve learned thus far:

Life is meant to be a beautiful thing.

I have learned that the beauty of the human spirit is that it is so strong; it can overcome almost anything. I have learned that love and kindness really do matter—that even when horrible things are done to one another, we can still band together and find forgiveness.

Hatefulness does not have to exist, and the absence of it during something like this does not tarnish the memory of the person we mourn; it makes it, and us, stronger.

We are much stronger than we think.

Time after time the human spirit has had an attempt on its strength and we’ve seen where it has not been broken. We can all be pillars of strength and compassion. You just have to allow it.

Allowing your emotion does not hurt you. It heals you; makes you stronger. Spread loving kindness, good vibrational energy, positive emotions, and see what it does for you and those around you.

We are an experiment in spiritual evolution. Things that happen to us hurt, I know. I would not be pretentious enough to sit here and speak about rainbows and flowers when life can be so ugly and mean. I’ve been there.

Being with our experiences will set us free.

My husband and I have endured some of the most devastating things in our lives. And I’m not just talking about the deaths of our mothers. We’ve been devastated by financial loss, personal heartbreaks—troubled times I would never wish on anyone.

Almost daily I see other people’s stories about hard times on TV and I still say, “Wow, that’s nothing.” We truly have been through some serious stuff. It took me a long time to let all of that go.

I have only just begun to feel the spiritual awakening in myself, off and on since 2008, maybe, with a long period of going back to my old ways in there for probably a year. But once it begins, you can’t ignore it. Once it’s in you, you can’t go back from it; it doesn’t go away.

One of the most helpful philosophies I learned was from Eckhart Tolle. He basically stated that it’s not the things that happen to you that your pain arises from, but your reaction to it.

I have changed my life based on this and many other writings by Tolle, Dr. Dyer, Louise Hay, and others.

Pain invites us to grow.

I hated how I felt. I chose to change. It can be done. You don’t have to rush. It will happen exactly as it is supposed to.

When you allow yourself to be instead of trying so hard to do all the time, you will be listening to you inner being, and you will finally hear it. You will notice all of the synchronicities happening in your life; the paths to the right destinations for you will open up.

We could have crawled into a dark hole and shut ourselves off from the rest of the world after what has happened to us. But we won’t do that. We deserve better. And so do you.