Courting Chaos: Embrace the Unexpected and Grow Into Yourself
By Bronwyn Kienapple 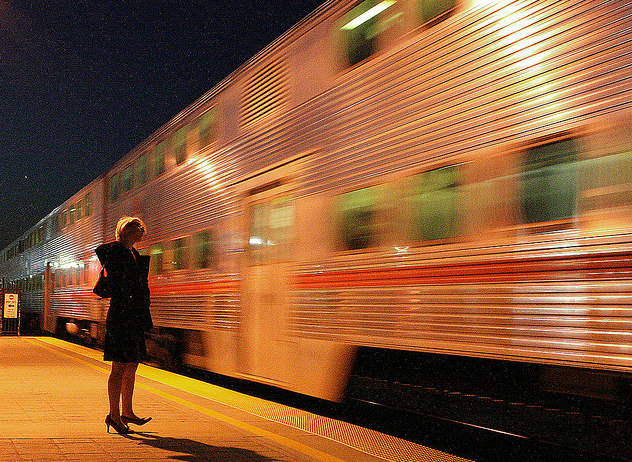 “In chaos, there is fertility.” ~Anais Nin

“I thought it was just beef,” I stuttered, surveying the thick slabs of juicy meat I’d just been scarfing down. He subtly rolled his wide brown eyes. What a gringa, I’m sure he was thinking.

It was an inauspicious start, but this unexpected event ended up setting off a chain reaction of positive events in my life.

My new friend Juan invited me back to a studio where his friend’s rock band was recording. I’d recently quit my job to travel and had been in Mexico City for less than a week so I was hungry to meet new people and dive into new experiences.

I ended up spending the evening in a dilapidated old mustard-colored house in the Roma Sur neighborhood. I met many artistic types, including a Brooklyn-born man named Mark who had a substantial mustache and an equally significant swagger.

Mark ended up being the recruiter who interviewed me less than a week later for an English teaching job. “I know you!” he exclaimed as soon as he saw me. The interview led to my first teaching contract in Mexico City.

Meanwhile, Juan took me on a series of adventures. I accompanied him and a friend on a late-night street art project in the downtown. We lingered on a disintegrating stone rooftop, watching the stars glistening faintly above the teeming city.

We sat talking about the impossibility of atheism in an apartment cluttered with plants and lit with the sounds of Bob Dylan and Joy Division.

I felt like I’d discovered a whole new world of creativity and spontaneity. It was as if I was underwater, only I felt like I had much more oxygen to breathe in.

I had wanted to live in another country since college, but events had always conspired to keep me in my hometown of Toronto. A long-term relationship, a steady job, or tenuous finances were my usual excuses.

Certainly, I didn’t think I could bear the emotional cost. I had struggled with depression since college and had been on and off medications, and in and out of therapy, for years.

I simply did not think I was resilient enough for such a massive change.

A fraught love affair taught me otherwise. A well-travelled, multilingual, culturally omnivorous, and highly intelligent man, my lover left me ravenous for experience of the world outside Toronto.

He also left me lonely in love, and I conspired to flee this city where I had stagnated not only romantically, but professionally and personally as well.

I decided to put aside my fears in the name of personal growth. I owed it to myself to be everything I could be, and I could not do that at home.

I sold off most of my possessions and packed up the rest, quit my stable marketing job, booked a one-way ticket to Mexico City, and said goodbye to my lovely friends and new boyfriend. Where I would go from there I hardly knew, but it was a start.

The first week in Mexico City was an intense lesson in culture shock. Still, I took the serendipitous events involving Juan and Mark as a sign that this immersion in chaos was exactly what I needed.

Not everything that happened to me over the next six weeks was fortuitous. Sometimes I was desperately lonely. Often I was vulnerable and overly dependent on the kindness of strangers to rescue me from odd situations.

And yet, much of what happened to me was weirdly wonderful. A friend I met through Couchsurfing took me salsa dancing at a wild club in Xochimilco in the south of the city. I slept in her spare room, and in the morning her lovely family made me a traditional and very tasty breakfast of Chilaquiles, pan dulce, and hot chocolate.

My second Couchsurfing host in Mexico City, who loves death metal and works at a pharmaceutical company, also ended up being a dear friend. He introduced me to mescal and Garibaldi, a public square where you can drink al fresco. He rented a mariachi band and we danced in the open plaza under the stars.

Although my depression can never be cured by such experiences, I’ve learned that travel isn’t an automatic invitation for this illness, either.

And I am not my depression; I am a person outside of this illness. That person needs the enrichment of new people, strange sights and sounds, a different language, and odd happenings—in short, the unexpected.

It is these types of experiences that throw into relief all of our preconceived and deeply cherished notions about how the world should work and how each of us should be.

Chaos can be food for the soul if we let it in with an open heart and mind and a healthy appetite for personal growth.

Chaos also starts at home; there’s no reason you can’t court it right at your doorstep.

Ask yourself what your final frontier is. Do you fear learning a new language because you’re already tongue-twisty enough? Are you putting off a career change that seems outside of your realm of experience or intelligence? Think you’re not the sporty type because you have two left feet?

I used to resist anything to do with travel except for its most mundane manifestations; I was desperately afraid of any situation in which I didn’t have absolute authority.

And still, desperate for relief from the mundanity of unhappiness, I decided to invite the unexpected into my life. I booked a week-long solo trip to Cuba as a test run.

I wanted to be the jaunty solitary traveler pushing new frontiers. It wasn’t always like that—I was lonely on occasion and overly cautious. But I did it.

I had never dared to imagine myself as a traveler. It was only when I allowed myself to do this thing that I feared, imperfectly and slightly, that I was able to transgress my limitations. It was then that I knew I could move to Mexico.

Start small. Identify your fear. Let it into your life, just a fraction of it. Allow it to sit there awkwardly and watch as the person you think you are sniffs it out, backs away, circles it warily.

Go slowly. Allow yourself to feel intense discomfort, as well as the pleasure personal growth. Approach chaos with an attitude of self-care, not lack of caution.

Try a language course online. Search out a volunteer position that’s similar to your desired career. Run a really rough single kilometer after dark and celebrate with a divine piece of chocolate.

And then plan your next move knowing you’ll take care of yourself every step of the way.

If I hadn’t invited chaos into my life, I would have remained defined by limitation. I wouldn’t have known who else I could be. Who else are you?

Bronwyn is a Toronto-based freelance writer who's previously done work for The Grid and Toronto Standard. A selection of her writing can be found here. She's seeing a huge spike in traffic on her blog for her posts about her travels.

Why I’m Trying Harder to Be Kind to Strangers