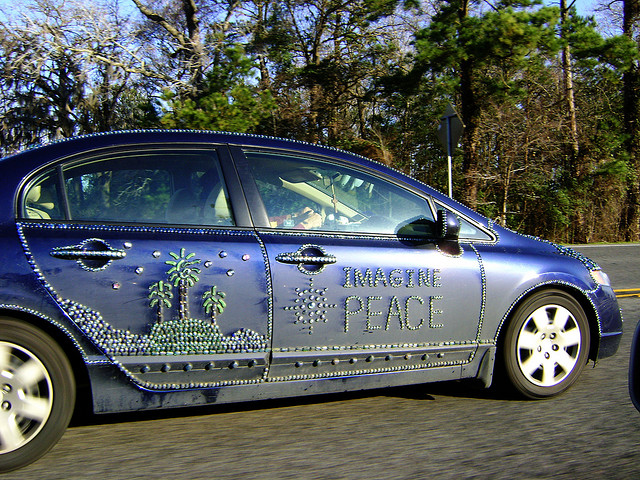 It happens all the time…

You’re driving, listening to music, just enjoying life and the feel of the road. Then a car roars past you and the driver promptly swerves and cuts you off, seemingly oblivious to anything but his own destination.

Or, you come to a full stop at a stop sign and the driver behind you lays on the horn, impatient for you to get moving. Glancing in your rear view mirror, you see him flailing his arms and punching a raised fist at you behind his windshield.

Nearly every time you hit the road you will see another driver do something either discourteous or even downright dangerous.

Many times, you are the recipient of that behavior.

If you are anything like I used to be, your first impulse will be to lay on the horn, shout a curse, or put pedal to the metal and try to pass the guy and then cut him off.

Those of you who are less aggressive may at least find yourself wishing you’d come around the next bend and see the guy’s car off the road with a flat tire—or, better yet, see the bright flashing lights of a police cruiser whose uniformed driver has pulled your new worst enemy over.

As noted at the beginning of this post, the Buddha warned us that the punishment for anger is anger itself. He also said, “Holding on to anger is like grasping a hot coal with the intent of throwing it at someone else; you are the one who gets burned.”

How right he was.

As you shout curses at the driver, nearly rupturing a vein in your forehead, he has already left you in a cloud of dust. He has no idea you’re yelling. Or if he does, he probably doesn’t even care.

While you sit stewing and dreaming of his immanent intimacy with an overheated radiator (or, admit it, much worse!), he is long gone. But you are trapped in anger that will linger for a few minutes or may even ruin the rest of your day, clouding everything with the bitterness of the mood you fell into after the driving mishap.

That anger is doing you no good.

It isn’t changing the situation.

Instead of shrugging it off and getting on with your life, you’re allowing that one discourteous act to take you from being happy and content to bitter and angry.

But what is a person to do? After all, the slight is perceived and the anger arises, unbidden.

I used to have that same struggle, but I found a cure and I can guarantee if you master this one simple technique, you’ll banish road rage to a cobwebbed corner of your mind where it will die a lonely death.

So what’s the trick, you ask?

As I indicated, it’s very simple (though not necessarily easy to master).

The next time another driver does something that provokes anger in you, do these seven things.

Initially, your mind may rebel.

You may reason it’s more likely the person is just being a jerk. That may be the case, but can you actually know that?

(And isn’t your angry response very “jerk-like” itself?)

Any number of situations could be at play in that person’s life.

Perhaps it’s a man whose wife is about to give birth and he wants to be by her side. Perhaps it’s a daughter whose father just had a heart attack and she needs to get to the hospital to see him. Or maybe it’s someone who just lost her job and feels distraught. Maybe, just maybe, it really is just someone being rude.

The fact remains that a response of anger on your part only further upsets you and can even lead to acts of violence in extreme cases of road rage.

Is it worth it?

How much better is it to do what I just suggested and then, in a peaceful frame of mind, wish that person well and safely home.

Wouldn’t this world be a better place if we could all do this one, simple thing?

Photo by accept on eclectic

Frank Paino is a self-proclaimed "eclectic Buddhist" who blogs A Permanent Grin, a site that aims to help readers find real happiness and then change the world for the better.  Subscribe to his blog here.