We Belong When We Connect with Each Other
By Kathy Kruger 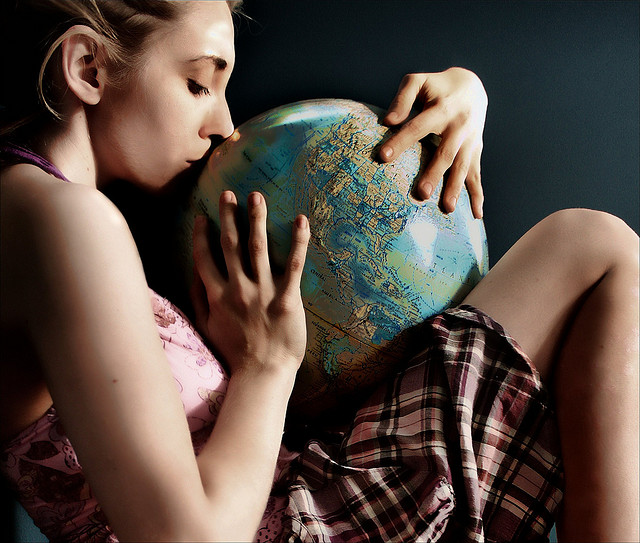 “When you live on a round planet, there’s no choosing sides.” ~Wayne Dyer

Te holiday season is a time to connect with others, to celebrate our common humanity, even if the holidays we celebrate are different.

Instead sadly people all over the world are still taking sides. They seek to identify with one “side” or another (tribe, culture, religion, politics, nationality). They seek to belong by being distinct from others.

But finding identity in reinforcing our differences will never give us a true sense of belonging, a real sense of connection. We are already connected; we are already one. We are all just individual expressions of the same universal energy.

We need to work out how to stay united—connected in our diversity, rather than divided by our differences.

When my husband and I were suffering infertility (infertility is still there, we just choose not to suffer anymore), I desperately wanted to belong to the Mother’s club.

But instead of reaching out to friends and colleagues who were mothers (every woman around me, it seemed) I chose to disconnect. I let my insane jealousy drive a wedge in friendships, and my mom friends walked on eggshells around me.

As I put distance between us, it was easy for them to drift away.

We embarked on a long and arduous (and ultimately unsuccessful) IVF journey, and I remember walking out of our first information session feeling like I was already branded—infertile, guilty as charged.

So we became patients, but didn’t seek connection with other couples. We didn’t offer them compassion, nor seek solace in our own struggles. And running away from the shared sense of consolation we might have had only left us alone.

In distancing myself from my mother friends, and in refusing to engage with other IVF patients, I choose neither side, so was left inconsolable in my own corner (with my husband, of course).

But as Wayne Dyer points out, the world is round. There are no corners to hide in.

Towards the end of our IVF journey we finally decided to connect with other couples going through fertility treatment and to spread awareness about infertility, to break down the stigmas that had left me feeling so branded. And it felt good.

Then as I struggled out from under the weight of depression and we chose to end fertility treatment and commit to adoption, I made efforts to reconnect with friends who were mothers (just about all of them by then). And that felt good too.

By the time we went through the rigorous social work assessment (your house is never as clean as for your first social worker visit), successfully argued that my depression was under control, underwent reference checks and medicals, and even had our fingerprints taken, we were ready to meet the other couples with whom we’d complete our journey to parenthood—in China.

When we all met for Chinese Dinner we instantly connected. The bond that grew between us was more than just in our common desperation to be parents. It was in a shared commitment to help our children grow up as “China Cousins.”

And that’s what has happened.

Adoption has connected us not only to our precious children in China, but also to the other families, forever. Adoption has bonded us to our children’s birth parents through loss and gain, just as it has cleaved us to the country of their birth and heritage. We have been richly blessed.

There is an ancient Chinese saying:

An Invisible Red Thread connects those who are destined to meet across time, place and circumstance. The thread may stretch or tangle, but will never break.

When you realize that we are all connected, across languages, cultures, countries, and beliefs, you realize that the “red thread” is in fact unconditional love; it does not bind or shackle, but unites us all in a circle of love.

We welcomed our daughter in 2004 and then finally adopted our son in 2010, returning to China with two of the families we had originally traveled with. Our special bond grew even stronger.

Then we embarked on another adventure—moving from Australia to Canada for a year-long job exchange last year.

Our Aussie accents denoted our differences, and for a while I disappeared into myself—partly through fatigue from the long road to complete our family, partly through sheer infatuation with our new son, and partly due to cabin fever in the miserable weather.

I didn’t connect and I started to feel the cold creep of depression again.

As the weather warmed, we made more of an effort, and we were warmly welcomed. We’d been in Canada five months when the Vancouver riots erupted after the Canucks home team lost the final. Senseless violence (there’s no other kind) because people chose to take sides (so far removed from team loyalty).

We watched in disbelief and I sensed the shame Vancouver residents felt. As they came together to clean up the city and its tarnished reputation, I shared in their common humanity. And I started to feel like I belonged.

Belonging is never found in a gang mentality or tribal war, or in overblown patriotism, divisive politics, and religious superiority. It’s not found in intellectual snobbery, or following the latest fashions or relentless competitive materialism.

Belonging comes through empathy, compassion, non-judgment, and mostly through love.

It’s not found when we chose to identify with what sets us apart from anyone else. It’s found when we connect with those things that make us all the same.

Kathy Kruger is an adoptive mother of two beautiful kids from China. She blogs about going with the flow, finding yin yang balance, embracing change, and being grateful at www.yinyangmother.com. A former journalist, Kathy shares insights from her long journey to motherhood.

5 Common Regrets and How to Avoid Them

Finding Joy in the Ruins of a Crushed Dream