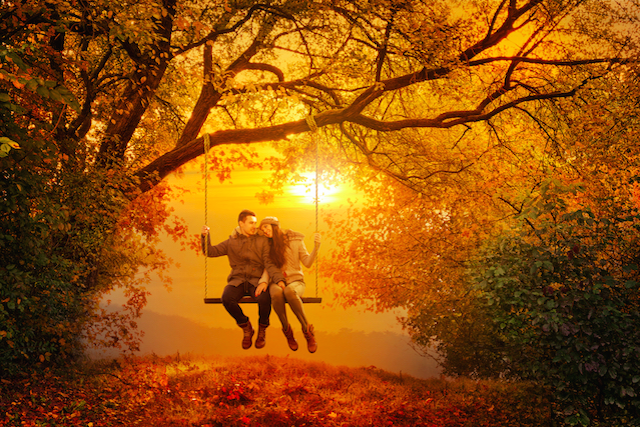 “Our own ego judges us, so we become afraid of self-awareness. If it’s not puffing us up to look better than others, it’s tearing us down—anything to block us from feeling at one with reality and who we are.” ~Beth Maynard Green

Have you ever had insecurities stand in your way?

Have you ever felt afraid to tell someone how you feel?

Have you ever felt like someone could never love you the same way you love them?

We all have insecurities that hold us back in our professional life, our social life, and most of all, our love life. This is something I’ve struggled with a lot.

As someone with a serious physical disability who is basically a quadriplegic, I have often told myself I am not complete.

I’ve told myself I’m not enough, that I’m not good enough or strong enough. I’ve told myself that other people are not interested in knowing me or that they have already made all sorts of judgments about me.

Through my self-criticism, I’m actually imposing my self-image on other people, assuming they see me the same way I see myself. That way, I have an excuse to refrain from being vulnerable because I already made their minds up for them. I don’t have to open myself up and see what they actually think. I have an excuse not to take chances.

So, in a twisted sort of way, I’m actually feeding my ego while also “protecting” it from any actual feedback that I could learn from. Also, I’m missing out on the possibility that I could reach out and make a meaningful connection because maybe my self-criticism is off base.

How Insecurities Blocked Me From Telling Someone How I Truly Felt

I remember struggling with insecurity when I met a girl in college. She was beautiful and talkative, and I was an attentive listener. She liked to tell stories, and I loved to listen to her slightly British-sounding Caribbean accent.

She was energetic and outgoing while I was more laid back and introverted. Our temperaments complemented one another. We hit it off right away.

I really liked her, and I felt like she might like me too, but my insecurities kept getting in the way. In my mind, she could never like me the way I liked her.

We spoke on the phone late into the night and spent every moment we could together. But we were just friends.

So I talked around the issue. I poked at it from one direction and prodded at it from the other. I did everything I could to avoid being the first to say something really dangerous, to avoid showing my true feelings.

My subtlety was without compare; my hints were so obscure that even I wasn’t sure what I was talking about. She never suspected a thing.

Eventually, my ego got tired of protecting me from the terrible fate it knew would result. I decided to try something different.

I got up the courage to let her know how I felt about her, and she reciprocated. The feeling was unbelievable. She was my first and only real girlfriend.

From then on, the world would feel like a profoundly altered place. For the last twenty years, she’s been a constant reminder that my ego has no idea what it’s talking about!

How to Find the Courage to Tell Someone You Love Them

As someone with a physical disability that leaves me dependent on others, I’m no stranger to insecurity. I’ve told myself all sorts of stories about how unworthy I am.

If I can find my way past negative self-talk, anyone can. Allow me to share some ideas that helped me along the way.

I took a while to learn this, and I’m still learning this every day, but the ego is a double-edged sword. It can make you feel great about yourself, and also terrible.

What the ego loves to do is tell stories about reality; it likes to believe that it has everything figured out.

We think we know exactly where we stand, exactly the way it is that people perceive us. Sometimes it’s easier to “know” we will fail than it is to actually try and risk embarrassment.

It’s time to challenge our assumptions and burst the ego’s bubble.

When we attribute thoughts or motives to others, this is often just based on our own insecurities. This mental chatter can even be randomness. Thousands of thoughts go through our heads throughout the day, many of which we ignore as inconsequential or even nonsensical.

You’re doing yourself and the other person a disservice by trying to read their thoughts through a cloud of your own insecurity.

I did this a lot with her facial expressions and intonation. I was reading her all over the board, convincing myself that she was everything from madly in love with me to pitying me and using me as a charity case.

This sort of thing can drive you crazy, and at some point, I knew I had to stop because it was destroying my ability to be genuine. If I’m not being myself, pursuing a real relationship with anyone, let alone someone I have real feelings for, is pointless.

3. Leave your mind; enter the moment.

When you want to tell someone you love them, you want to feel fully in tune with them. If for some reason you decide that the other person doesn’t feel the same way, you want that decision to be based on that person’s actual behavior, not some random doubt on your behalf.

As an introverted person, my ability to project my own insecurities on the world is strong. I have to make a conscious effort to focus on what is actually happening in the interaction.

This can sometimes be done with a mini mindfulness exercise. Just focus on the sights, smells, and sounds in your immediate vicinity. Most importantly, focus on the other person and what they’re saying, not what you’re saying to yourself in your head.

4. Let your heart speak; let your ego be vulnerable.

Keep it real, but accept there are no guarantees. If you’re nervous, show it, or even say it. If you’re not sure how to say how you feel, it’s okay to say so and take a moment to figure it out.

If you’ve known this person long enough to feel like you’re ready to share intimate feelings, they probably like you enough to allow you the time to gather your thoughts. If not, this probably isn’t the time to broach the subject.

In my case, I can remember stumbling over several different versions of what I wanted to say before settling on one that seemed appropriate. It’s been a long time, so I don’t remember exactly what I said, but the words will be different for everyone, and, honestly, they don’t matter so much as the authenticity of the feelings behind them.

5. Remember, no matter what, you will be okay.

When it comes to love, we often stop ourselves because we fear the consequences we’ve dreamed up. “What if I ask someone on a date and they say no?” But the truth is that, whatever the consequences, we have the capacity to move on.

Living your life in fear is far worse, never knowing how it feels to take a risk on love.

When you accept the idea that you will be okay despite any social consequences, you will act with far more freedom — which is invaluable in areas even beyond romance. Because fear of social consequences can cripple us in so many different ways, from making friends to career advancement.

If I Can Do It, I Know You Can

I know you’re thinking that you don’t have the courage to tell that special person what you’re truly feeling, but I believe in you. If I can do it, I know anyone can.

See yourself taking that first step and feeling the relief of being open and honest for the first time. Envision the smiling face of that other person in response to the heartfelt words you’ve shared.

Picture the newfound confidence you’ll feel because you were rewarded for your bravery and authenticity. Imagine the new life that is ahead of you, a life shared with someone you care about.

This reality could await you if you would just abandon your self-criticism and the insecurity, and open yourself up to true possibility.

You’re probably telling yourself that this sounds unlikely. I know this because I’ve told myself the same thing, but I know from experience that the negative self-talk is a lie more often than not.

Take the first step, and follow the principles I outlined above.

A beautiful new romance is waiting for you.

Jonathan Hinek encourages you to live and love life no matter its obstacles. If you want to implement real, lasting changes toward a happier you, download his free report Happier Now: 21 Proven Techniques to Improve Your Outlook Instantly.