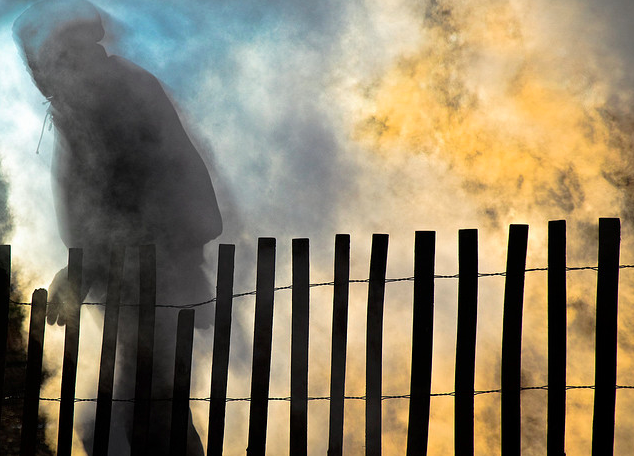 “The most important distinction anyone can ever make in their life is between who they are as an individual and their connection with others.” ~Anne Linden

After growing up in a household with extremely loose emotional boundaries, I soon learned the importance of establishing my own personal boundaries as quickly and clearly as possible. And, in recent years, I have even managed to become more eloquent about when and how to set them.

I grew up in a home with my grandmother, mother, and older sister. Grandmother was an immigrant from Hungary who came to America right after WWI. Her husband also came from Hungary a few years later, opened his own butcher shop in New Jersey and died right before the wedding of their only child, my mother.

My grandmother moved into my mother’s newly established household right away. Although she contributed to expenses, and eventually childcare, she had a very strong personality and tended to dominate the emotional climate of the household, sometimes with a mere look or a snide word.

Because of this, my mother felt habitual anxiety and quiet judgment, while my father eventually left.

Throughout her failing marriage, my mother made the best decisions she could for her family, in the midst of my grandmother’s steadily voiced opinions, while my sister and I acted as the emotional sponges of the household, as all children do.

And as the younger sister, I had three strong, female personalities trying to temper uncertainty with an attempt to control whatever and whoever they could, resulting in an invasiveness that seemed to soak into my skin.

Nevertheless, I established an underlying anxiety with a quietly strong and outwardly mellow personality.

But whenever I became slightly aware that a person around me crossed into my zone of emotional intrusiveness, I would institute a quick and firm boundary, be it a mean word or complete disregard, often at the expense of kindness.

At times this seemed necessary and effective, and other times, the solid and immediate boundary was slightly aggressive, mostly pointless, and my anxiety turned inward to anger anyway.

More often than not, the person I was dealing with had made a simple error in judgment, or I perceived the situation incorrectly.

Nevertheless, I continued on this path until my mid-thirties when I was introduced to Buddhism and the idea that empathy, kindness, and the credence of fundamental goodness were paramount to living an authentic life.

Although I thought my quick reactions and unyielding boundary setting for myself were based in genuineness, I was wrong.

Rigid boundaries were my way of trying to swiftly rid myself of uncomfortable feelings, like anger and fear, often before I had all of the information, and never in a way that evoked compassion.

As it turned out, I was unequivocally avoiding the present moment and trying to make it less prickly, while I focused on asserting my great, big self. It turned out to be mostly about me, not much about reality, and nothing about kindness.

Overall, I believe that being assertive is a useful personality trait. But, when unnecessary assertion of self became my go-to reaction in daily situations, it began to feel somewhat silly and clearly was not the person I intended to be.

Asserting yourself when all that is required is kindness and compassion is not assertiveness at all;  it is selfishness.

Today, my initial motto in most situations that bring me discomfort is, “Do no thing.” This is not the same as passivity, because it is followed up for four additional habits that allow my values of kindness and compassion to be more in line with my actions and reactions.

I was a witness to 9/11. When I saw the buildings go down and looked up at the Empire State Building from my office window, I knew that structure was the next likely target and an immediate, quick decision needed to be made.

The directors at my office told us to “stay put” in the building, because they believed it was even more dangerous on the street.

So we sat for the next two hours, and no other planes crashed into the city. In that moment of clear and present danger, the best thing that could be done was nothing and to just reside in the moment as it unfolded.

I have rarely been in personal situations that needed to be handled immediately. Nevertheless, more often than not, I did handle every social exchange immediately, just to avoid the anxiety of not taking care of that situation.

I spoke from an impulsive reaction and acted in a similar way. Many times, this resulted in regretful words or behaviors as well as hurt feelings. If only I had done nothing, waited to react, then decided to respond when the words and the time were right, I might have felt more authentic and better more often.

When our only concern is the skin on our backs, we neglect to see the vast picture, including those around us and the earth. In fact, we only see a very minute part of the picture, our own selves.

When we respond to a situation as a whole, we are not sacrificing ourselves; in fact we are becoming our authentic self and surrendering to the whole of the circumstances, which is closer to the truth.

3. Clarity can be gentle.

Most reactions happen with only part of the information. One helpful way to gauge when and how to set a boundary, and avoid shutting the world out, is to ask further questions such as, “Did you mean to say that in this way?” or, “Do you intend to give this inconsiderate message?”

When the answer is “no,” then you and the other person can communicate and find the real message, a common ground and hopefully mutual, social fulfillment.

When we feel sad, bad, or scared, we often blame the behavior of someone else and establish our emotional boundaries around that censure. But most times, this seemingly thoughtless or intrusive person is rarely intending to hurt us, and simply doing the best they can with what they have in their own social climate.

In fact, whatever anyone else does or says usually has very little to do with us.

We sometimes believe we are the center of the universe, the star actor in our own dramatic movie. We worry about what others think of us, how others treat us, and what we are getting from each situation.  Actually, we are just one of a few billion ordinary people who all want the same things like love, attention, and happiness.

When we set boundaries with the realization that we make mistakes too, being kind is much easier. We hear it all the time: “No one is perfect.” Well, this includes us, and when we remember that, the behavior of others becomes less poignant to our ego, and we can act out of compassion rather than anger.

I use this one, and I use it often. I make mistakes in my interpersonal interactions and inevitably cross the emotional boundaries of others. Sometimes this happens to me daily.

Mostly, the best I can do when I have crossed a boundary by saying an unkind word, disregarding the feelings of another, or snipping at my husband is to simply say, “I’m sorry,” and move on.

When we finally realize that everyone is constantly just doing their best to live among other people, we have fewer resentments, less moments of anger, and can then have the emotional space to generate compassion instead of resentment.

Holly Hurban has her Ph.D. in Criminal Justice and has published entries in the Law Enforcement Encyclopedia, yet is energized by creative writing. She is trained in contemplative Shambhala Art and Miksang Photography.  Two photos are on exhibit at Dragonfly Gallery at Rosedale in Austin through the holidays. Follow her on Twitter and Fotoblur.

How to Set Difficult Boundaries in a Compassionate Way

How to Set Boundaries in Awkward Situations with Strangers