Don’t Try to Get Over Your Fear; Go Through It Instead
By Holly Ostrout 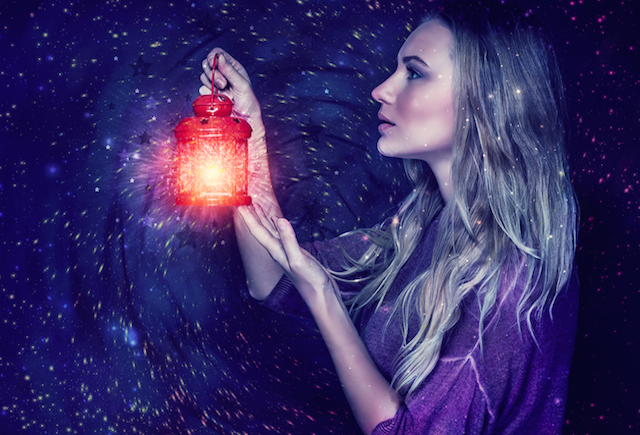 “I must not fear. Fear is the mind-killer. Fear is the little death that brings total obliteration. I will face my fear. I will permit it to pass over me and through me. And when it has gone past I will turn the inner eye to see its path. Where the fear has gone there will be nothing. Only I will remain.” ~Frank Herbert, The Bene Gesserit “Litany Against Fear,” from the novel Dune

When I was very small, my grandmother would watch me while my parents were at work. Nana often wanted a break, and her house held very little to stimulate a pre-schooler, so she’d put a VHS tape in and sit me down in front of the TV.

The movie she put in most? La Bamba.

Maybe you’ve seen it, maybe not. I’ll give you a bit of history. It’s the life of Ritchie Valens, leading up to that fateful night he, Buddy Holly, and the Big Bopper all died in a fiery plane crash in Iowa.

So that was my introduction to air travel.

I probably watched that movie twice a day for months at a time. I can still vividly picture the opening scene’s fiery mid-air collision.

I haven’t seen La Bamba since I was seven or eight, but the deep, primal fear of flying it instilled in me lived on until I was almost thirty.

Now slide forward to my teenage years, and the first time I gave up a free trip to New York City, and then a class trip to Australia, because I was afraid. Then to my early twenties, when I passed up vacations and travel outside the country. I limited the colleges I wanted to apply to based on whether or not they were in driving distance.

And then, somehow, when I ended up moving all the way from Georgia to upstate New York for school, I drove that distance in a U-Haul, and didn’t see my family for years because it was too far to drive again. When I finally did see them, three years later, I drove the fifteen-plus hours (one way), most of it in snow.

Not everyone needs to fly to have a happy life, but I think I did. I wanted to travel all over the world, but most of all, I hated that something so mundane was holding me back from anything. I needed to get over it, but I didn’t know how.

I tried self-hypnosis and guided hypnosis. I tried just “sucking it up.” I tried learning the mechanics of flight so I’d understand, rationally, that it was safe. I considered drugging myself with tranquilizers and having my family haul me onto an airplane while I couldn’t think about it. But the fear lingered on for fifteen years after I decided I wanted to end it.

The One Thing That Finally Helped Me Move Past My Fear

I first bought the book Dune, by Frank Herbert, when I was in high school. I first read it about eight years later, when I could find interest in more than the cover art. Since then, it’s become my favorite book. My husband and I are reading it together now, me for the second time and him for the first.

It’s a huge book. Epic, engrossing, transcendental—just like my fear of flying. If you haven’t read it, do. I can’t recommend any other book as highly, and not just for the literary value or entertainment, but also for the lessons it teaches—not overtly, not preachy.

Dune teaches environmentalism, politics, race and gender issues, religion, and philosophy without saying it. When you read it, you internalize all of those issues without even realizing it.

And that’s where I found the beginning of the ending to my fear.

There is a mantra repeated several times, taught to the Bene Gesserit, a sect of women who are highly trained in physical and mental arts that skim the border between possible and impossible in our world. That mantra is the Litany Against Fear, quoted at the top of this essay. The Bene Gesserit, and the son of one, our hero in Dune, use the mantra to remind themselves not to bother with fear.

It goes beyond looking in a mirror and telling yourself “you’re good enough, you’re smart enough, and doggone it, people like you,” as Stuart Smalley said on SNL.

In Dune, the Litany Against Fear can change the entire mental space of the character reciting it. Its value is that it allows a person to defeat the chaos fear brings to our minds. If they defeat that chaos, Dune’s heroes can get through suicidal situations, or mentally slow their life processes down so they don’t need air for half an hour. While that kind of physiological control is probably outside of our human abilities, the value is still apparent:

We can alter our response to fear.

Fear is a natural response, but it brings chaos with it. Our heads fill up with black, chaotic thoughts, and depending on how strong the fear is, we’re left stuck, unable to act. This is what happened to me with my fear of flying. I was stuck, constantly, in a state of indecision: I wanted to go places. I wanted to accept invitations. I couldn’t.

Maybe if I wait a day or two, I could, I would think. But I never did.

What Dune teaches us with the Litany is that humanity can overcome fear where animals can’t. Our primal urge when confronted with fear is to run, hide, escape. But as humans, we don’t have to do that. We don’t have to react just because fear acts.

The second half of the Litany reads:

I will face my fear.
I will permit it to pass over me and through me.
And when it has gone past I will turn the inner eye to see its path.
Where the fear has gone there will be nothing. Only I will remain.

There is the answer to the chaos fear causes.

There is no inherent problem with fear. The problem comes when the fear remains because then that chaos lives on, affecting our minds and bodies with its insidious, chronic destruction.

When I first read the passage containing the full Litany, I got chills. I realized I was facing this fear of flying over and over, day after day, without resolution, when I could just face it once, let it pass over me and through me, and once I’d landed, I could look back and there would be nothing.

“Just face your fear” is way easier said than done. We all know that. But what if you looked at it differently? What if you didn’t tell yourself it would be okay, that it’s not actually as scary as it seems, that everything would be fine?

I’ve heard that fear kills you over and over, when instead you could die just once at the end of a good life.

What if you told yourself: I know I’m afraid. This is really scary. But, I’m doing this anyway because every time I fear this thing, it kills me over and over—just as much as if the plane really did go down. I may have to face the fear again in the future, but each time I do, I’ll be better at it and stronger than it.

Because you can’t go through life letting fear stop you, or you’ll never start anything. And you’ve got a life for a reason. You’re meant to start something amazing with it. But you’ve got to accept your fear first.

Don’t try to get over fear. Go through it instead.

Let yourself be afraid the first time you do something that scares you. Let yourself feel the fear for a moment, and then acknowledge it and let it flow past you.

Destroying the Chaos and Moving Past Fear

When I fully internalized that realization, I knew I would never let fear dominate me again. I was afraid of flying, but so what?

I got a single line from the Litany tattooed on myself, where few people would see it, and written backwards so that whenever I stood in front of a mirror, I’d see it, read it, and remember it.

The day I first stepped onto an airplane, I stood in front of the mirror for a long time, staring at that tattoo. I told myself I was afraid. I told myself we might crash. And then I got on the plane.

Now I look back and there’s nothing there.

Holly Ostrout is a writer, minimalist, certified Project Manager, and the founder of www.CreateAlchemy.com, where her goal is to teach 10,000 overwhelmed, ambitious women how to destroy chaos in their lives with personal rituals so that they can focus on their passions. If you’re ready to kill the chaos, grab a free 7-day email course to help you get started here.

Yes, I Am Afraid to Fly, But I Won’t Let My Fear Control Me