Embracing Uncertainty: The Future is Open, Not Empty
By Erin Smith 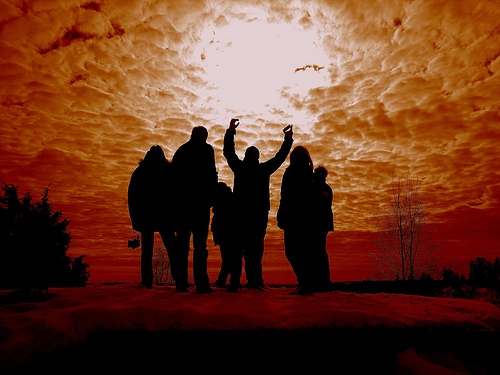 “As for the future, your task is not to foresee it but to enable it.” ~Antoine de Saint-Exupéry

A month ago, I was at a crossroads. I was unhappy with my job, I no longer wanted to be living at home, I was tired of being three states away from my boyfriend, and I was sick of feeling unfulfilled.

I knew change was coming, but what I did not know was that I was to be the catalyst.

I had moved back in with my parents after college, as I started the daunting task of job searching. I worked retail for most of the summer, broken only by a two-and-a-half week stint as an editor for a company that sold writing workshops to major corporations.

I loved the job, but the people turned out to be less than willing to train and accept me, so back home I went.

I finally found a job at a bank in the fall and set off learning a career in finance for the next year and a half. Acquiring a new skill set was intimidating at first; I was an English major and math had been an enemy of mine since grade school, but I quickly caught on and enjoyed it for a little while.

Eventually, it became clear that it was not the career for me; sales goals and customer service grew old fast, and I longed for change.

Along with living at home and working at a job that left me wanting more, my boyfriend was three states away. We met through a mutual friend in college, but attended separate schools. Our relationship had been long distance from the start, but when he graduated, his job took him even farther from me; meeting twice a month if we were lucky was not the relationship I had imagined.

I felt stuck, wishing for a crossroads to appear so I could take a different path.

I stood around waiting for change, waiting for the signs to come flashing in my direction, for a contact to call me up with a job offer, for a path to be laid out neatly in front of me.

I think we all do that sometimes, wait for a decision to drift our way. But what I realized is that we need to come to the decision, not the other way around.

After staying late at work one Monday, I was driving home and had the overwhelming urge to drive to the beach. I had to be there before the sun set, I had to look at the water, smell the salt and seaweed, see the scattered couples bundled up and holding hands.

I sat on the boardwalk and just stared. I stared at the ocean far away from me as the tide pulled it out and gave up my worries, just praying that I would find happiness soon.

It reminded me of the summer that I had been offered an interview with the writing workshop company. My phone had rung while I sat on the boardwalk talking to my best friend as we stared at the water, then teeming with small children.

Sitting there that Monday night staring at the distant waves, I willed for things to be different. A couple days later they were.

A meeting that lasted all of Wednesday that same week decided it. I endured glares from superiors because I had missed the suit jacket memo. I felt excluded being the youngest supervisor of the bunch. The guest speakers pushed more sales pitches on us and talked about fees as if they could be fun.

I came home crying because knew I couldn’t keep doing it, wasting my time and happiness on a career that I didn’t care for in the least bit; so I walked in the next day and gave my two weeks notice.

I realized that I had been unrealistic in my search for happiness, dreaming that it would grace me with its presence one day, set me free from tedious job.

I had been passive, thinking the answers would come when they were ready.

I had been waiting for that perfect moment, that time when opportunity would come forward and present me with an array of options from which to choose. That didn’t happen. I’ve learned that it never will happen.

I found this out through a course on Creativity I took my senior year in college, a class that had pushed its way to the back of my brain and was just coming back into focus. We concentrated on Julia Cameron’s works along with many others, and I fell in love with a new way of thinking. I had always been a pessimist, but through the texts and the course I found optimism.

We talked a lot about embracing uncertainty, especially because all of us were surrounded by doubt and fear as graduation loomed closer and our futures were seemingly blank.

I learned not to interpret the future as empty, but as open, full of possibilities, full of opportunities waiting for me to be the key player.

We often interpret the unknown as bad or scary, but it is all in the viewer’s perception. Just as you can choose to see the glass half full instead of empty, so can you choose to view the future as brimming with possibilities instead of emptiness.

We are the decision makers in our own lives. Happiness is a choice, not a given; it is a true gift, a privilege available to all, but we need to have the strength to accept it.

I adopted one quote that Julia Cameron refers to frequently within her texts, and I use it as a reminder when I face uncertainty:

“Leap and the net will appear.”

The future may be frightening, but I have seen signs along the way that assure me my decisions have been the right ones. These signs have appeared now that I have taken action and decided to be the leader in my own life; they aren’t the signs that I was waiting for as I passively sat on the sidelines, taking a backseat to change in my life.

While I have been unemployed for the past month, I have gone on multiple interviews, received one job offer that unfortunately did not fit my needs, and have a second interview lined up for a job I really want. I moved in with my boyfriend and now see him every day instead of twice a month, and I have the time to focus on myself, my goals, my writing, and my peace.

I still have frequent panic attacks in which I fear that I am unemployable and worry that I will not find a job; however, that is when I breathe and remind myself of how much I have accomplished already.

If we don’t give ourselves credit, no one else will.

If we commit to finding happiness, the world can open up in ways that were never apparent before. If we commit to taking an active role in life, nothing can stop us from achievement.

Erin Smith is an aspiring writer. She is a strong believer in the powers of emotion and creativity. She has begun blogging as a beginning to her path to self-discovery at kaleidoscopeyes and hopes to continue gaining strength through writing and enlightenment through experience.

Wisdom from the Sea: 3 Life Lessons Learned on the Ocean

Stop Looking for Signs and Trust Yourself