Embracing Vulnerability and Putting Yourself Out There
By Jon Giganti 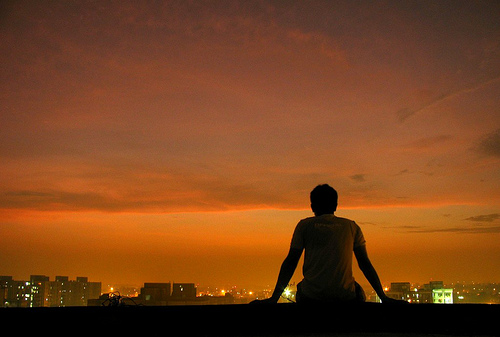 “He who deliberates fully before taking a step will spend his entire life on one leg.” ~Chinese Proverb

I’m not going to put myself out there.

What are they going to say about me?

What if I’m not good enough?

What if they laugh at me?

What are people going to think of me?

The list of worries goes on and on. Our minds like to swim in the ocean of complacency.

It’s time we embrace the fact that we need to be vulnerable.

I had the opportunity to see Brene Brown speak recently at the World Domination Summit in Portland.  Brene is a professor, author, and powerful storyteller. She has done some amazing research on embracing vulnerability and basically knocking fear out.

It was an enlightening talk for me. As a guy’s guy (or at least I think of myself as one), I’m the guy that defaults to putting my armor on. Nice and tight.

I’m challenged to put my feelings out there. I tend to put on a happy face, even when sadness hits. I default to the old school way of thinking—the “never let them see you sweat” motto. I’m working on it, however, and I’m making progress.

It’s not that I’ve never put myself out there. I started a blog in 2009 about productivity and personal development. It was hard for me to open up. A number of questions surfaced (like the ones at the beginning of the post).

What were people going to think? Why am I qualified to talk on these topics? I finally said screw it and jumped in.

It was a daily struggle for me. I would start to write a post, only to throw it out as I let this fear creep in.  I swear I have about 100 drafts all over the place (and many more in the garbage can).

I hear a lot of people talk about how important it is to just hit “send”—to move past the fear of judgment. It’s vulnerability at its essence.

I let fear win for a long time. It was a process; it always is. The first step to conquer this fear was to simply know it was there. Knowing is one thing; however, beating it is another.

Did I make some progress with my writing? Sure. It was weak progress though. My progress entailed small leaks in my armor.

Then, I got lucky. I started to hear from random people that I was making a difference in their lives. I couldn’t believe it. I can’t explain that feeling of knowing what you’re doing is helping someone. It doesn’t matter if it’s one person. This was the transformation for me. The validation.

No longer was my vulnerability holding me back.

My fear hasn’t gone away completely. It never will, but that’s a great thing. When you’re feeling vulnerable or fearful, it means you care.

Think about that the next time you feel that way. You care—simple as that. Once I embraced that and received the positive feedback, it was off to the races.

Fortunately, this is bleeding over to many areas of my life. For example, I’ve been able to conquer my fear of public speaking through practice, as I joined Toastmasters a couple years ago. Once again, letting go was the key to my success there.

It’s still a work in progress, but it’s amazing what happens when you just let go.

Are there areas of my life that I need to work on? Absolutely.

Success breeds success though. It’s a snowball effect. Once you submit to your vulnerability on one thing (and just accept it and push through), it will be that much easier with your next challenge.

How do you embrace vulnerability? These key steps are a start:

Open yourself up. Be present. Understand what makes you experience this fear. As I stated above, until I realized my fear was based on how much I cared, I was held hostage. This is the first step. If you aren’t in tune with this, there’s no way to embrace or overcome it.

Don’t try to fool yourself. Just because you’re putting yourself out there in some capacity, that doesn’t mean you’re not letting fear get the best of you the other 95% of the time. Find one thing to focus on. Get your first victory, and then go from there.

Be okay with it.

I know, it’s hard to say you’re scared or vulnerable. It’s really freaking hard. It’s normal.  Your ability to be okay with vulnerability will bring exponential results when it comes to experiencing joy. I bet if you asked every person you’re close to whether or not they experience fear, you would get 80% to say yes. The other 20% would be lying.

You’ve got to break free at some point. Take the shield off. Go write that letter you’ve been thinking about for the last five years. Tell someone you’re sorry, even if you think it should be them coming to you. Write that novel that’s dying inside of you. Just jump. I promise it won’t be as bad as you think it will be.

There is infinite power in embracing your vulnerability. It means letting go—letting go of failed relationships, failed projects, and anything in your past that felt like a failure—and putting yourself out there in the now. Until you let go and focus on the present, joy is just a myth.

Don’t wait. Take off your armor. Embrace your vulnerability.

I leave you with one of my favorite quotes from Marianne Williamson.

“Our deepest fear is not that we are inadequate. Our deepest fear is that we are powerful beyond measure. It is our light, not our darkness that most frightens us…Your playing small does not serve the world. There is nothing enlightened about shrinking so that other people won’t feel insecure around you. We are all meant to shine, as children do…And as we let our own light shine, we unconsciously give other people permission to do the same. As we are liberated from our own fear, our presence automatically liberates others.”

Jon is the founder of The Catalyst Project, a blog about work/life performance and contributing to the world.  In addition to writing and coaching, Jon is in corporate technology sales and serves on the Board of Trustees for the non-profit, Creative Living.  He lives in Columbus, OH with his wife and two children.