Living in Extremes: Releasing the Need for Chaos and Control
By Melanie Reno 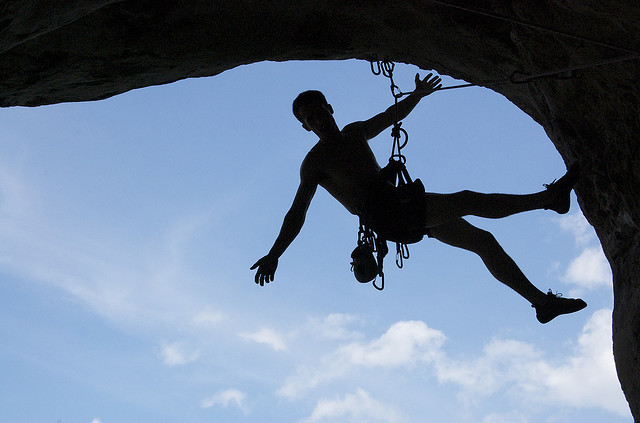 “There is more to life than increasing its speed.” ~Gandhi

The next time I feel it urgent to text someone off Craigslist after 11pm, I may think twice.

I was obsessed with attaining the body of a fitness model. I had recently been laid off and when life gets tough, I go to work—on my abs. It’s hard to accept that I can’t sweat away my troubles or make my problems magically disappear by tightening my thighs.

I tend to be a little high-strung, and excessive exercise helps me cope. Or, it possibly just adds more fuel to the fire. Whichever it is, during this particular fitness frenzy I found myself at a Starbucks near LAX waiting for the Craigslist seller I texted the night before. He had what I needed, and at half the price.

I have since learned that when you say, “Let’s meet at thatStarbucks by the airport,” both parties need to be very specific about which one “that”is.

I’ve heard stories where one person is at this Starbucks while the other is at the store two blocks down, but I never considered the possibility of mixing up three locations.

I got to the first Starbucks and looked for my seller. He said he’d be wearing a black jacket. I told him I’d be wearing workout clothes, as I’d be coming straight from my Barry’s Bootcamp class in West Hollywood. He didn’t need to know this, but I tend to give out unnecessary details.

When I opened the door to enter the Starbucks, it was the type of entry that brings with it a gust of wind – blowing everyone’s hair and rustling their papers. Since all eyes were now glaring at me, it was hard to tell who was looking because they were selling and who was just pissed off.

I felt one man looking longer in my direction than the others. I walked up to him and whispered, “Are you the guy with the P90X?” He paused for a moment and then laughed, “No, I’m not.”

If I had asked someone in, oh I don’t know, Minnesota for P90X, they would probably call the cops. In L.A., the familiarity obviously skewed high. This man knew right off that I was referring to Tony Horton’s 90-Day Extreme Home Fitness Workout DVD Program, and not a new blend of Ecstasy.

I realized what I must have looked like to that man in my gym clothes trying to score P90X from the streets. I appeared to be an obsessive fitness fiend! I was feeling pretty embarrassed when I got a text from my seller: “Running 15 minutes late. Sorry.”

Normally I would be pissed, because I time things very close together to maintain the chaotic feeling of my childhood.

Luckily though, the leisure life of unemployment had softened me, plus I had eyed a TJ Maxx a few doors down. I replied, “No problem”, and ran to TJ Maxx, which was easy since I was in my running shoes.

I dashed around the store, like a contestant on that late ‘80s shopping spree show. The buzzer sounded prematurely, when I got another text from the seller saying he was at the Starbucks. Naturally, the line at TJ Maxx was anxiety-inducing long, so I had to release the death grip I had on a box of sexy stationary and I resentfully ran back.

I expected to be instantly greeted by my seller, but all I got were more hostile glares. I texted, “Okay, come forward! I am the girl in the work out clothes.” That’s when the real fun began, because he replied, “There are no girls in work out clothes.”

It hit me that we may be at different locations. I hurried outside to check for additional Starbucks stores. Logically, I spotted one almost directly across the street.

But when I went to the second store, he wasn’t there either! Where the heck was he? I’d been there waiting for over an hour now. My boyfriend would start to wonder. I hadn’t bothered to mention my little Craigslist detour on the way home.

I picked up my phone and called the seller, a clear sign I was feeling desperate, as I always opt for the least direct form of communication possible. Texting is my favorite social crutch next to hovering over an M&M bowl at a party.

As it turned out, he was at our original Starbucks location, a third possibility I hadn’t even considered because I had suggested we meet at the gust-of-wind-store instead. He agreed. I have the electronic paper trail to prove it.

As I waited for my seller to make his way to me, I thought about the conversation I had with my boyfriend a few night’s before. I had told him I was thinking of signing up for a six-week long outdoor boot camp taught by real Marines. I thought he would applaud my dedication to physical fitness.

Instead, he looked at me the same way he looks at our cat when she barfs for the third time during the night—bewildered. What he said next burned in my mind for a week’s worth of meditations to follow, “Is it really wise to do a $400 boot camp when you are unemployed?”

Yes! I considered it to be a fantastic use of time. I mean, when would I ever again have this kind of time to dedicate towards fitness? I didn’t actually say this though. There was a certain ring to his flabbergasted tone that triggered a terrifying vision of my unnecessary and dwindling ING savings account.

Maybe my boyfriend was right? I won’t do the boot camp. I can live without it. Who needs that kind of extreme training anyway? It’s not like I’m going to war.

I felt good. I felt responsible. For the first time, I felt more Janet than Chrissy.

Unfortunately, my new maturity was temperamental.

I woke up in the middle of the night panicked: I am sick of playing it safe! I am doing the boot camp! Then I thought: When have you ever played it safe? You don’t even carry a map in your glove box and you rarely wear sunscreen. Plus, you have a horrible track record with money.

I decided to do one last meditation before I made my final decision and to release the pent up anger towards my boyfriend. During that final sit, the answer came to me—there was a happy middle ground: P90X.

So that’s how I ended up at Starbucks, impatiently waiting for my half-priced P90X.

By the time I finally returned home with my fitness DVDs, a total of five hours later, my boyfriend questioned my whereabouts, “I thought you were just going to the gym?”

I was nervous to tell him where I’d been. He’d think I was being obsessive. He says I’m like a pit-bull. I get an idea, clench down, and won’t let go.

But I also thought he’d be proud of me for choosing the more budget -fitness option. He didn’t seem too impressed though. Instead he said, “So, you’re going to be jumping around the living room every morning?”

I hadn’t considered how disruptive extreme home fitness could be in a tri-plex.

The apartment shook at a 5.4. Neighborhood dogs barked. My sickly cat rose from her precious fleece bed and rolled across my workout matt. My boyfriend, who works from home, shut both his office door and the adjoining hall door. And, our next-door neighbors seemed to be up earlier than usual.

Despite the upheaval to my community, I stayed committed to the DVDs for 8 weeks, or P56X. Although I was getting some nice oblique definition, I decided I needed to stop.

It dawned on me that I am one of these people with an extreme personality. If I ever wanted to veer away from living in such emotional extremes—highs and lows—then maybe I could start by avoiding exercise regimens categorized as “extreme.” I finally started to see that my workouts might have, in fact, been adding fuel to the fire.

It was the state of mind that engaging in that type of fitness fed. Instead of settling me down, it stirred up my compulsive side.

It’s been a painful process to let go of the illusion that intense exercise somehow gives me the power to control my life. Life happens at its own speed. I can’t increase it.

I’ve been slowly seeking more moderate exercise and am working towards a healthier relationship with body, mind and spirit—a trio that I find works really well together, like Jack, Janet and Chrissy!

So, the next time I feel compelled to text someone late at night off Craigslist, I hope I think twice.

You may recognize Melanie Reno from “Comedy Central,” but she doubts it. Melanie produces and hosts the female storytelling show, “That Time of the Month.” Her goal is to become the Poster Girl for Anxiety. Check out her blog The Nail Biter.

Forming A Healthy Habit Starts from Within

Autoimmune & Coronavirus: Beating the Panic & Fear in All of Us

Being Fit Without Letting Food and Exercise Control You