Find Your “Rat People”: The Best Advice for People-Pleasers
By Lori Deschene 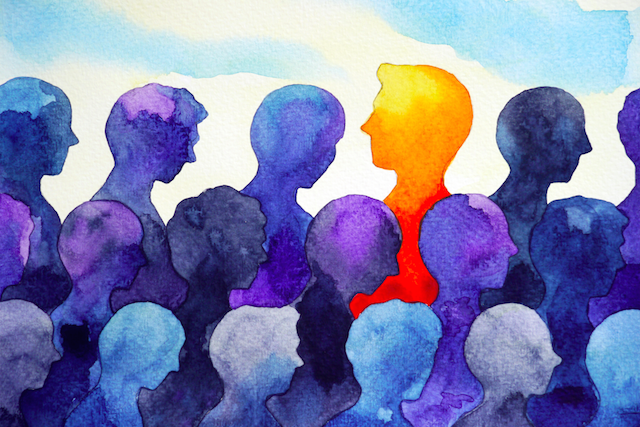 Allow me to rephrase: I don’t have an affinity for murderous ladies, and I’m also not a fan of murder as a practice. I am decidedly pro-loving people and anti-killing them. And yet I enjoy the show Deadly Women and watch it with my sister, who shares my interest in true crime, whenever I’m home.

I don’t share this with many people. Why? Because it’s weird, or so I’ve thought. Maybe it’s more that it’s tough to explain.

I wouldn’t want people to judge me or somehow think less of me because I’m drawn to documentaries and books that dig deep into the psychology of criminal minds.

I wouldn’t want anyone to assume I’m dark, twisted, and sadistic.

Why am I making this bizarre confession? I recently started thinking about the little things I’ve never publicly shared after listening to an interview with writer and designer Paul Jarvis.

As you may recall, I’m currently producing a new podcast called Next Creator Up, with my partner in many things and show host Ehren Prudhel.

This week’s interview focuses on the idea that less is often more, both in general and specifically in business. And there’s a lot of emphasis on deciding for ourselves what it means to live a successful life.

While the whole interview spoke to me as a creative person, a minimalist, and an entrepreneur, I keep thinking about this story he told in the beginning about finding his “rat people.”

Paul has pet rats, and he unabashedly shares his affection for them even though he suspects 99 percent of the population find them dirty and disgusting.

He posts pictures of them on Instagram. He’s dedicated books to them. And he could care less if some people think this is weird. Because 1 percent of the population gets it, and he’s okay with speaking to just that 1 percent when he shares his love for his rodent family.

He wrote an email newsletter about this many years back, using this story as an analogy for finding the people who’ll get our creative work, and it ended up being one of the most popular emails he’s ever sent out.

The message: Find the people who will appreciate what you do and love you for it, and ignore the ones who don’t. They don’t matter. They’d never support you, so stop trying to win everyone over and focus on connecting with the people you don’t have to try hard to please.

Be okay with the majority of people not getting what you like and what you do. In fact, don’t just be okay with it; relish in it—because it’s far better to be supported by a few who really see and appreciate you than to be accepted by many who don’t and never will.

If you google me you will find a lot about my work in the self-help world. If you follow the digital breadcrumb trail, you may come to see me in a particular light. And I have to be honest, I’ve wanted to be seen in that light. I’ve wanted the majority of people to like me and see me as someone who cares and aspires to help people.

It’s not that those things aren’t true. It’s just that they’re not the whole picture. I’ve unintentionally fed into a certain persona in an attempt to appeal to the majority, as this is what I’ve always done, in all aspects of my life.

I’ve tried to be all things to all people. I’ve tried to be palatable to all. I’ve aspired to be the human equivalent of pizza, because I want to be loved, and who doesn’t love pizza?

While it feels good to imagine most people see the best in me, I don’t want to be only partially seen. And I don’t want to limit what I’m able to do and create based on this narrow idea of who I am and what I have to offer.

I don’t want to forever pigeonhole myself because I only share certain parts of myself. I want to wave my freak flag high—no f*cks given—and be okay with the fact that many of you might think it’s too big, too bold, or too eclectic.

And yeah, I wrote f*cks, which I know some people find offensive. Sorry not sorry. I’m literally terrified to publish those words, but oh how f*cken liberating!

I swear, a lot more when speaking than you’d imagine if you read my writing.

I enjoy tarot card readings, even though I don’t believe anyone can predict the future, and simultaneously write about the power of staying in the now.

I spend too much money on expensive facials.

I love an excuse to wear a costume and would be totally into King Richard’s fair and steampunk, though I’ve yet to delve into either.

And as for my creative work? I want to break through the walls I’ve built around myself over this last decade and expand beyond the world of self-help.

As you may know, I’m an aspiring filmmaker. But I also want to paint—not landscapes or anything peaceful, but weird, Tim-Burton-esque images that are more interesting and surreal than beautiful and serene.

And I also want to write a murder mystery someday, either a novel or film. Something dark and compelling and intriguing. Something I’d watch with my sister when the Deadly Women marathon’s over.

And this means I’ll need to be okay with the fact that my work will only speak to some. Which has probably been true all along; it just hasn’t felt that way.

So going forward, whenever I’m tempted to water myself down—to serve you the cheese version of my pizza instead of the vegan wild mushroom pistachio pesto with tofu chèvre—I’m going to remind myself of the following:

I don’t need everyone to like me. Just the few who genuinely appreciate me once they see me for who I really am.

I don’t need everyone to like what I like. Just the ones who share my unique brand of weird and want to tangle our freak flags for a while.

I don’t need everyone to like what I say and write. Just the ones who get what I’m getting at and would never ask me to tone it down or rein it in.

And I don’t need everyone to like what I create. Just the ones who are drawn to what I want to draw with the messy palette inside my mind and my heart.

I realize not all Tiny Buddha readers are interested in creativity, but I know you rat people are out there! If you’re a creative trying to make a living off your work, I highly recommend checking out Paul’s interview. It’s jam-packed with tips and insights that can help you do what you want to do and live your own version of success.