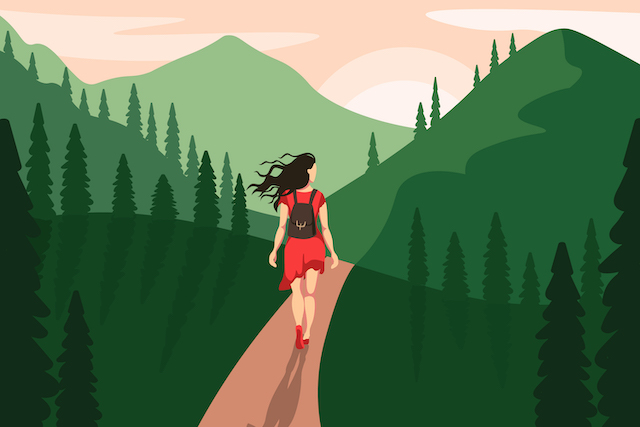 “All endings are just beginnings. We just don’t know it yet.” ~Mitch Albom

The difficulty of finding, let alone staying on a path was brought to mind recently when I got lost in a maze at a children’s amusement park. Seriously lost.

In the end I scrambled under the maze to get out. I didn’t like the feeling of hitting up against walls, turning and trying, and then finding another wall blocking my path. Mazes are designed to confuse, and together with the summer heat, I’d had enough.

As I came out from under the fence, someone jokingly called out “Cheater!” and they were correct. In that moment I wasn’t sticking at it.

It made me think, isn’t this sometimes the label we give ourselves when we’re on a path that isn’t right or isn’t working, and we’re considering quitting? Or we want to take a shortcut, grasp an unexpected opportunity, or take a different path from our predecessors?

It can be helpful to have a sense of direction. Not having a plan for what we want in life can result in low motivation and a sense of purposelessness. For many people it can be very stressful due to the societal pressure to have a plan for your life.

Sometimes I’m surprised at how early this pressure arises. Some young people I work with in my clinic feel pressure to decide what path to take at ages thirteen and fourteen. They share their concerns about every single grade they receive and their fear that if they’re not good enough they’ll have no future and a bad job.

Some might think that these young people are showing signs of being driven or highly motivated. From my perspective, it can make life quite narrow to live with so much anxiety and pressure about getting things right. Living in constant fear of a misstep is no way to live. After all, life is full of missteps.

Other people feel overwhelmed about which path to choose. They ask, “What if I choose the wrong path? What if I make a mistake? What if when I actually choose something, I don’t like it? What if I’m no good at it?”

In times gone by, people often finished school, got a job, and stayed in that career or job for life. However, modern life is not like this.

Changing economic and market conditions mean people are required to be more flexible and change employment type over the course of their life. So, in some ways, it seems futile for people to feel pigeonholed into making one choice, as it’s likely there will be many choices down the road.

When I talk with people who are struggling to choose or find a path, I often share my own story about how I became a clinical psychologist. My story is a classic example of how making a choice that’s not a good fit for you isn’t the end of the world. Often, like in my story, it can lead to an even better outcome.

During my high school years I fell in love with singing and drama, so I hatched a plan to take up musical theatre as a career.

The first sign that this probably wasn’t going to work out was when I didn’t get a place in my first choice of study. However, I chose to ignore this sign and, remaining hopeful, took up a position in a classical music program, even though I didn’t want to be an opera singer.

As the year wore on it became clear to me that this was not for me. Studying music at school had been fun, but studying music full time and mixing only with other music students was stifling and even boring.

A meeting with the dean mid-year, regarding my failure to progress at the level the program required, made the future clear. I saw the year out, but I knew I would only ever be an average music student. After spending a year around people who were more suited to it, I knew I had neither the talent nor the high levels of extraversion needed to succeed in a performance career.

It was kind of embarrassing. It was my first experience of failure. It was also an opportunity.

That part of me that was itching to learn more about the world, about people, about life outside of the narrow world of classical music, was set free. But what to choose? I’d spent years honing my musical ability and not considering doing anything else.

Fortunately for me, doing what didn’t fit had helped me to define what might. So I chose something that would expand my knowledge and ideas and that would help me serve others.

One of the things that had bothered me about classical music study is that it didn’t seem to contribute or benefit others much. I chose a general psychology degree based on the fact that I wanted to know more about people, and away I went.

Instantly the fit was better. I felt engaged, stimulated, motivated to attend, and alive. These were good signs that I was on the right path.

I share this story with people who are having difficulty making a choice because it incorporates two core areas that keep people stuck when finding or changing their path—fear of failure and letting go of past ideals.

Dealing with the Fear of Failure

1. Acknowledge that it’s normal to feel anxious about making a choice.

Having some anxiety about your choice does not make it wrong. There is little certainty in any path, so there is unlikely to be a time where you will feel completely at ease with your decision.

2. Practice managing your anxiety with breathing, mindfulness, and helpful self-talk.

Deep breathing is key to managing physical anxiety symptoms, as it calms the nervous system.

Mindfulness teaches us that we only have this moment and that it’s futile to try to control the future.

Helpful self-talk helps ease anxiety by reducing the impact of negative predictions. For example: “If you failed this, you’ll fail everything” could be changed to “Many successful people have changed their path or experienced failures, so it doesn’t mean I will fail.”

3. Look for stories of successful people who had missteps or changed their path.

Reading about people who made a career change can lessen the hold of negative predictive thoughts and old beliefs about failure.

Letting Go of Past Ideals

The difficulty with changing your path can also be associated with investment in your old one.

You may have put a lot of effort into achieving the goal at the end of that path. You may have told a lot of people about it. You may even be a little or a lot in love with the idea of reaching that goal.

When you need to or have to change your path, it can involve a sense of loss. Your mind may tell you it’s all been a waste of time. To handle these difficulties:

1. Let go of the goal by acknowledging your sense of loss and practicing acceptance.

It’s normal to feel sad about letting go of a past. Acknowledge those feelings without sinking in them and getting stuck. Notice the feelings and let them pass.

If you experience self-critical thoughts about trying for your goal such as “Who are you to even think you could have that?” you may benefit from changing it to something more helpful, such as “I did my best but it wasn’t for me. I will find something for me” or the simple “I could never know if I didn’t try.”

3. Focus on the positive of the current path.

As much as you can, be in the present moment. Cultivate that skill through mindfulness practice.

Know that the time spent on your old path wasn’t pointless. You most likely gained skills and insights from your journey so far that will help you either now or in the future.

Life can be more rewarding when you’re on a path. In fact, many people say that the journey can be more satisfying than the final outcome. With these strategies, you can avoid becoming paralyzed by the common blocks that prevent people moving forward and experiencing life fully. Allow yourself to live life to the full by taking a path knowing that you can change it if you need to.

Nadene van der Linden is a clinical psychologist in private practice in Perth, Australia. Nadene has two books coming in 2017 Tales from the Parenting Trenches: A Clinical Psychologist vs. Motherhood and Live Life to the Full: Your Guide to Feeling Better Sooner. Follow Nadene on instagram @nadenev.thepsychologist or facebook: Nadenev.thepsychologist and visit her at lindenclinicalpsychology.com.au.