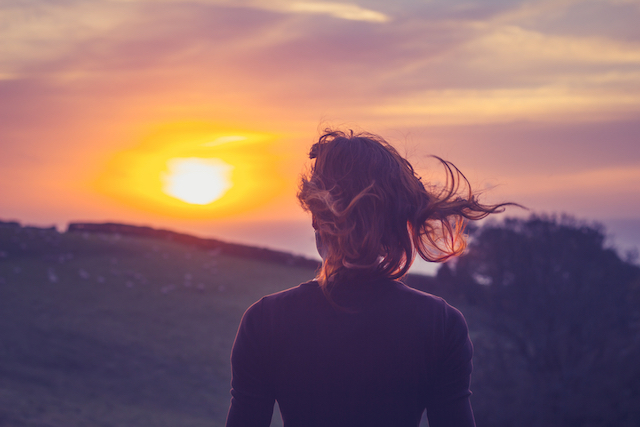 “Humbleness, forgiveness, clarity and love are the dynamics of freedom. They are the foundations of authentic power.” ~Gary Zukav

It was a little after 9:00 PM when my mother’s next-door neighbor called upset, hysterical even. Within seconds of hearing her voice, I knew something wasn’t right.

I was getting one of those calls that everyone dreads. Deep breath. She said that my mother had been brutally attacked and had been taken to the hospital.

“What happened?” I asked in my calmest voice, trying hard to listen and not react. “Where is she? What hospital?”

A family friend had taken advantage of my mother’s kindness. My mother had prepared a special birthday dinner for him, but that wasn’t enough. He wanted more, he wanted money, so he hit her repeatedly over the head with a wooden statue, hoping that she would give in.

For years, he helped Mom with odd jobs around the house, and now he was her assailant. The amount of blood loss, the tears, the hurt and betrayal—it was the beginning of the longest year of my life.

Prior to this incident, I was obsessed about living “the dream,” but the truth is I wasn’t happy. I was a control freak who suddenly felt out of control. My desire to marry and have the perfect family no longer seemed important.

After waiting for hours in the hospital, I entered my mother’s room and broke down at the sight of her ballooned face and shaved head. She was unrecognizable.

How could he have done this to the sweetest woman on earth? She’s alive, so why am I still angry?

Many of my friends and family members thought I’d be more equipped to handle an incident of this magnitude, since I’m a licensed social worker who works with non-profit organizations and families. But it was beyond challenging, and there was still so much work and healing to be done.

Some days later, my mother told us the entire story. She said that when the wooden statue broke, her former handyman grabbed a large crystal vase to continue the beating.

My mother was fighting back and yelling at him to stop. Then all of the sudden he turned around, gently set the vase on the dining room table, and walked out the front door.

He had spared her life, and yet I still felt surges of anger flood my body several times throughout the day.

My mother didn’t start to resemble herself until her second week in physical therapy. Her hair was growing back and she could smile again. I felt relieved because it meant that she had survived.

As soon as she was able to formulate thoughts and words, she expressed her well wishes toward her attacker. By the time her physical therapy sessions had ended, she had completely forgiven him.

We knew he had a history of substance abuse, and his defense attorney tried to plead mental illness. He may have been under the influence of drugs when he attacked her, though we can’t be sure.

Regardless of what compelled him to commit such a horrible act, my mother recognized a hidden blessing in this tragedy: she’d wanted to move closer to her family for some time, and she’d been putting it off until this incident.

This was the catalyst for something that’s made her genuinely happy, and that helped her let go and forgive.

A Testament of Love and Forgiveness

In the book, The Giant Within Us, it reads, “Forgiveness is the miracle of a new beginning. It is to start where we are, not where we wish we were.” I kept hoping to be where my mother was in her process of forgiving, but I wasn’t. This frustrated me.

When it came to me letting go of the hurt and anger, my approach was vastly different than my mother’s.

Three practices that worked for me were:

In the morning, I practiced yoga and meditation, which introduced calm to my day and helped me realize there was so much for which to be grateful.

When the hurt and anger resurfaced, I brought my attention to my mother’s smile and the sound of her sweet voice until my thoughts faded into nothingness again.

On the days when I felt extremely low, doing my best in the moment and being positive were equally important. I spent some afternoons walking on my treadmill while watching sci-fi movies. It’s all I had energy for at the time and I told myself that it was okay.

Months after the attack, a friend suggested that I reach out to an energy healer or practitioner because I was having trouble sleeping. The sessions were relaxing, which greatly decreased my overall stress level.

The result was that I felt more balanced and clear-headed, and over time the pain and anger disappeared.

My mother joined a Senior Citizen Center to spend more time outdoors and enjoy life with her peers. She also found peace through engaging in therapy sessions to address her post-traumatic stress disorder (PTSD).

It’s interesting how my journey of forgiveness involved going inward, whereas my mother focused on external activities. However, we both learned that forgiveness means taking back the power we may have given to someone else for their wrongdoings.

It’s a personal choice that requires a great deal of commitment, compassion, and patience.

My mother’s response to the world before and after her attack is to do her part by expressing love, gratitude, and compassion. Her attitude contributed to her steady recovery.

Mom refused to let the incident change her, and that’s why she’s not only surviving but thriving. Whenever something bad happens, we have a choice: we can get bitter or we can get better. My mom chose the latter. Which will you choose?

A champion of healthy living, ancient rituals and self-healing, Leslie is the Founder and CEO of HolistiCitiLyfe, a wellness travel and holistic lifestyle event company based in New York City. She is also a licensed social worker who supports families and their children while working with non-profit organizations.

Everyone in Your Life Is You