Healing from Abandonment Trauma: 3 Things I Learned from Being Cheated On
By Brandon Grill 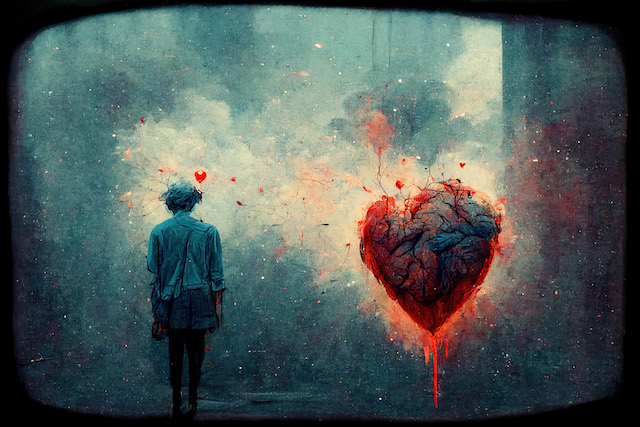 “The wound is the place where the light enters you.” ~Rumi

I want to share an experience I went through that hurt like hell, but that helped me so much in the long run.

The experience was being “cheated on,” though the woman wasn’t my girlfriend. Nevertheless, I was very attached and it felt awful.

So, let me start with the backstory.

I met Diana through mutual friends in late 2021. I thought she was cute, and a little anxious, which I seem to gravitate toward. That’s just my savior complex coming out, which is another story for another day.

Eventually we hooked up after a holiday party and continued hooking up regularly. I began to have stronger feelings for Diana than I anticipated, though I tried to play it cool and not cause any awkwardness in the group.

Things started deteriorating between us at one point, and it culminated in Diana going home with another guy basically in front of me.

Needless to say, I was devastated.

My friend who introduced me to Diana was there, and he asked me, “Are you catching feelings?” I was so angry that he would try to shame me into not feeling what I was feeling. I said, “Yes, I am” and left immediately.

On the way home, I was screaming in my car, and I even punched my steering wheel, which I had never done before. I was so triggered and mad. There was a tornado of emotion ripping through my chest—anger, grief, worthlessness, desperation.

The next day, I woke up and left the house to get a smoothie. I didn’t want to be by myself as I was going through this.

Initially I didn’t feel so bad, but I knew that the wave was going to hit me sooner or later. I started rereading books on relationships that I had read before. Books like Fear of Intimacy by Robert Firestone and Facing Love Addiction by Pia Mellody. Luckily, I had these books to turn to for guidance.

Over the next two weeks I cried multiple times on my way to work, or on the way home from running errands. I even pulled over a few times to bawl my eyes out and wail alone in my car before continuing.

Over the next couple of months, I worked on processing the grief and pain. Occasionally I would dive deep and get a memory of childhood abandonment, the real source of the pain. I’d get a memory of my mom not being there for me…

While I was growing up, my mom worked all the time to support our family. And we had such a big family that one-on-one time was basically nonexistent.

That meant there were countless times when I felt lost, abandoned, and overlooked.

Being deeply hurt by Diana gave me the opportunity to go right to the source of the pain, my original abandonment experiences. Daily meditation and journaling helped whittle away the pain.

It was slow progress for a while. I even stopped writing for a few weeks because I was overwhelmed with emotion. But eventually I began to feel like myself again.

The first two months were rough, the next two were a little better, and after six months I was finally out of the weeds. But more than that, I feel better than I did before I met Diana.

I feel as if my baseline level of security and happiness is higher. The way I think about it is that my abandonment experiences were heavy boulders weighing down my soul. Not carrying them around feels so much lighter.

I must have spent over 100 hours meditating to let go of these emotions, and I’ve learned a few things in the process…

1. Present pain is compounded by pain from the past. If you want to be free, heal the original wound.

3. We get what we need to heal in relationships. And I think that’s beautiful. While things might suck in the short-term, you’ll come to know that life has your best interests at heart. Now that this episode is over, I’m glad life gave me the experience I needed to heal.

Now it’s time for a counterintuitive move that helped me close this chapter in my life.

I used to think “being left by Diana like that hurt so bad and I wouldn’t want to experience it again, but I am glad that I was able to learn and grow from it.”

But that thought reveals that there is more work for me. To get closure from this experience, I had to open myself up to going through it again (but trusting life to not be so cruel).

It’s not what you would think would help, but when you run from an experience you are still controlled by it.

And if your goal is genuine freedom, you need to open yourself up to it. Of course, I will still be cautious going forward, just not fearful.

Once I opened myself up to experiencing that same pain and hurt, I became freer. I took off the armor I was wearing, and I know that life can be trusted to have my back.

I’d rather live with an open heart and get hurt than live closed off. That’s the way of freedom.

“You have to keep breaking your heart until it opens.” ~Rumi

Hello, I'm Brandon Grill. If you're reading this, I still haven't run for office nor scrubbed my online presence. Not that they'd find anything bad. I love meditation, writing, and the Beatles. Find me at bgcopywriter.com.

How I Healed from the Trauma of My Father’s Abandonment

Healing From the Painful Cycle of Loss and Abandonment