How Anxiety Became My Guide, Not My Enemy
By Madeleine Eames 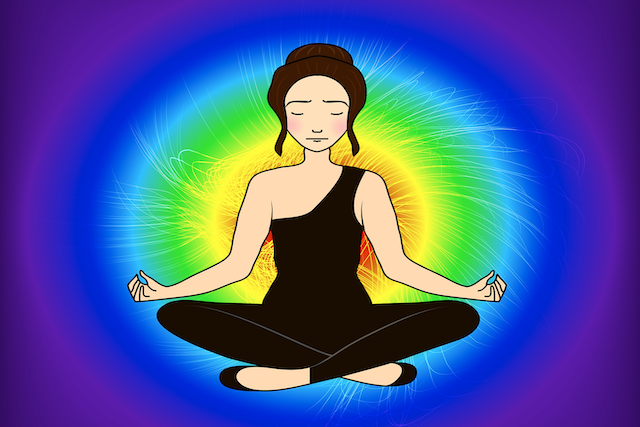 “You are not a mess. You are a feeling person in a messy world.” ~Glennon Doyle Melton

I have suffered with some type of anxiety for as long as I can remember.

The stomach aches at age five. Trips to the specialist, always coming back with no known cause.

The feelings in grade school of being different, of sticking out, or being mortally embarrassed to give a wrong answer.

As I got older, I strived for perfection in every way, so as to avoid criticism and feeling less-than. I was a people-pleaser to a fault, because to say NO would cause me too much discomfort. It was easier to attend to other people as an escape from what I was feeling inside.

I didn’t know it consciously at the time, but other people’s emotions caused me anxiety, particularly anger or conflict. Imagine trying to escape or calm the world’s emotional life! No wonder there was always an underlying feeling of inadequacy or lack of control… it was a task way beyond my mere mortal self.

My teenage years were even more tumultuous as I kept up an external façade of straight A’s, a smile, and being ever-so-nice. But inside I was a nerve-wracked mess.

I remember the moment I stepped out of my home at age sixteen with my friends and took a drink of something, probably Southern Comfort, and felt the warm, comforting stream of the strong liquid enveloping my insides and melting any tension as it went down.

How I navigated a serious party life as well as kept up with school is now completely beyond me.

Alcohol was a very effective escape from a body that took in and absorbed everyone’s emotions. It worked well, but only up to a point. The façade began to crumble as I felt more and more out of control, and more disconnected from myself and my uncomfortable body.

I thought it was my uncertainty about my life direction.

I thought it was the fact that I couldn’t keep up my perfect marks.

I thought it was because I wasn’t pretty enough, smart enough, popular enough, thin enough.

Ahhhh… that last one I could control. I seamlessly slipped into an eating disorder that allowed me to at last, and fully, escape a body that was now becoming uninhabitable with anxiety.

As humans, we are unbelievably skilled at survival at any cost. It’s how our ancestors survived as a species, and we are the product of that. Our spidey sense for any perceived threat is locked and loaded, and when our nervous systems are overwhelmed by trauma, we can vacate.

And vacate I did. The relief of having my weight as something I could control was exhilarating. Anorexia was my best friend and my way of surviving. Bulimia was an effective tool for being able to eat all my emotions down, and never gain weight.

I sometimes wonder what it would be like to take my seventeen-year-old self and say, “Pause, darling, just pause. Be in your body, right now, just for a moment. You can do this. It won’t harm you. It’s just incredibly uncomfortable… and it will pass.”

The more I avoided it, the worse anxiety became. My body, meaning my anxiety, was my enemy.

This was a trap I didn’t even know I was in. Like Plato’s allegory of the cave, I didn’t know where the door or windows were, or that I was even really trapped.

I thought the trap was outside of me when it was always inside.

My inner world was a nightmare.

Until one day I showed up for a doctor’s appointment, and my kind doctor said something that pulled me out of the cave of denial I had so carefully created around me. She said, “You’ve lost a lot of muscle. Your heart is a muscle.” Boom.

Something about that statement shook me to the core and I bolted awake. No more hiding. No more ignoring the fact that I was 86 pounds at 5’4”. The reality set in, and in that moment began the long journey home. The long, beautiful, and sometimes rocky journey back to me, my true self, inside my body, where I live.

When I started to re-enter my body, it was like a crash landing on the moon. You bounce around a bit and then eventually settle in.

I didn’t have a language of emotions, so I had no possible way to describe what I felt. To be honest, I don’t think I knew what a feeling was. I was literally cut off from the neck down.

Re-entering my body began the moment I stepped on a yoga mat. I could start to feel my toes, the soles of my feet,  my heart beating, and my lungs breathing. I was here. Right here. Right where I had always been.

With the help of a therapist, lots of yoga, and a fair amount of travel to get out of my own head and into the world, healing became possible in my twenties.

It’s not such a great surprise that I then became a therapist, a yoga teacher, and a big believer in embodiment as an essential healing tool for anxiety. We have to be present in our bodies in order for them to heal.

We have to be in touch with what is happening, in order to relax it, exercise it, or let go and surrender it.

Overcoming anxiety became my life, my contribution, and where I felt most comfortable.

Until one day it got flipped on its head, upside down, and everything changed.

That was the day I had some time and took a random test called “Are You an Empath?

How could I not have known? How could I have missed that because of my extra-sensitive nervous system, I was taking on whole-heartedly, ever emotion I came across?

When my mother told us kids she had cancer, I had to leave the house.

When there was tension in the house, it was unbearable for me even though I didn’t know what it was.

When one of my three siblings got in trouble, I was worried to death.

I was incapable of managing what was arising in my body, and I was completely unaware of this. No wonder I had to escape in any means I could reliably get my hands on. It all made sense now.

My work completely changed. I focused less on helping people manage and calm their anxiety and more on helping sensitive people to listen closely to their bodies and respect what they could do comfortably and draw boundaries where and when necessary.

I no longer felt we should be able to build up our nervous systems to tolerate a world full of stimulation, sit through uncomfortable movies or conversations, or sit in a classroom that felt unhealthy.

I no longer felt there was something wrong with me. I was very right. I was an empath.

I was a feeling person in a very messy world.

It wasn’t my job to change myself to fit in. Or to change a profoundly stressful society. It was my job to listen closely to a finely tuned nervous system that alerted me to when it had had enough, and it was time for rest, peace, and solitude. I no longer had to please others to keep the peace, I only had to please myself.

I only had to save the only person I could ever save, which was myself.

If I could go back to my seventeen-year-old self now, there are two pieces of vital information I would give her. Two steps we are not taught that are absolutely crucial for living a life of freedom. They are simple, but not always easy.

They won’t harm you, they can just feel very uncomfortable in your body. When we can slowly let them in, they have a beginning, a middle, and an end. To feel them is to start healing them. Anxiety can often guide us to what feels right, and to know where to draw the line.

2. Thoughts are not facts.

Thoughts are powerful if we let them be. They can lift us up or destroy us. Notice the fearful thoughts of your small self that cause anxiety. Choose the thoughts that feel helpful, make you feel more powerful and at peace, and guide you toward your true self.

You don’t have to be anyone other than who you are. Knowing who you are starts with knowing your inner world, including your anxiety.

Madeleine Eames is founder of Mindful Living Now, which helps people heal trauma and chronic pain and realize their worth through counseling, breathwork, mindfulness, and yoga. Join her in the quest to reclaim our lives at mindfullivingnow.com or on Facebook or Instagram. Join Madeleine’s next online retreat Good Girl to Good Enough.

Surviving as an Empath During the Time of Coronavirus