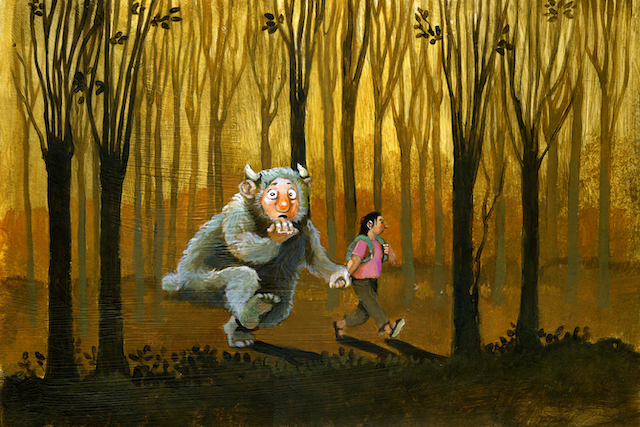 “‘What should I do?’ I asked myself. ‘Spend another two miserable years like this? Or should I truly welcome my panic?’ I decided to really let go of wanting to block, get rid of, or fight it. I would finally learn how to live with it, and to use it as support for my meditation and awareness. I welcomed it for real. What began to happen was that the panic was suspended in awareness. On the surface level was panic, but beneath it was awareness, holding it. This is because the vital first step to breaking the cycle of the anxious mind is to connect to awareness.” ~Yongey Mingyur Rinpoche

I have suffered with anxiety and depression for at least fifteen years. I can’t remember a time when I didn’t. They both almost killed me, but I have learned that living with them, rather than fighting them, is far more fortuitous in bringing relief.

Fortunately, at no stage did I act on suicidal thoughts, but I would be a liar if I said I never had them. Not in terms of making plans, but the general idea did creep up on me, and for a while it was all-consuming. I also reached a stage where I didn’t care if I died.

Alcohol became a crutch and, in a strange way, beer actually may have been responsible for saving my life. The one day I ever seriously had intentions of ending everything, I walked past a pub after leaving work, went in, and proceeded to get exceedingly drunk. I reached a stage where I was incapable of doing anything worse to myself, and my inebriated state led to my wife telling me I needed to get urgent help.

Trying to put my finger on precisely why I started feeling anxious and depressed would be like trying to pick up mercury with a fork. It would be equally impossible to pinpoint at what age I began to suffer. I think I was always a worrier, even from early childhood.

In many ways I had a blessed upbringing. I had loving parents; we weren’t a wealthy family, but we didn’t struggle either. There was always enough food, and I was warm, clothed, and felt cherished.

That said, things weren’t perfect, as my dad worked away from home a lot. He did it to provide for his family, us; I am proud of him and in no way resentful. It did leave a hole in the home, though, and put a lot of extra responsibility on my mum, and maybe I have separation issues as a result.

My parents had high standards when it came to behavior. I recognize this now as having made me the person I am today. They gave me strong principles, for which I am grateful.

It wasn’t always easy to live up to my mum and dad’s expectations, though. I remember being stressed quite often about this and having a fear of being shouted at. In comparison with what some children sadly have to tolerate, I feel a little silly saying that, but I’m trying to give an explanation for my anxiety in later life.

Bullying was also an unwelcome companion throughout my childhood. Ridiculing, name-calling, and physical abuse all left their indelible mark. I can clearly remember the indignity of being drowned in another, older, bigger, stronger child’s spit.

The main focus of my tormentors was that I was “ugly”, “nobody would ever fancy me,” and that I would “never find a girlfriend.” I managed to disprove all three as an adult. Well, maybe I am “ugly,” but, frankly, as a happily married man, as long as my wife doesn’t think I am, I’m not sure it matters all that much.

What does matter, though, are the scars this taunting left. I’ve never really regained my confidence after them. I’m not sure I can, and they cause me to be hard with myself, leading to anxious and depressed thinking.

Maybe it was the bullying that really fed my depression and anxiety. I’ve been the victim of domineering, abusive behavior as an adult too, and there is a fragility inside me when faced with such onslaughts. I also have a very keen idea of justice and don’t enjoy seeing it being compromised.

Notwithstanding, I have never felt able to definitely put my finger on bullying as the cause of my, at times, poor mental health. Without the ability to do that, I believe I’m destined for anxiety and depression to be lifelong companions. That may sound defeatist, but my reality isn’t as gloomy as that last sentence might suggest, and the reason for this is something I can definitely point to.

GPs treated me for years for depression and made no mention of anxiety. The day following my escapism from suicidal thoughts through inebriation, my wife made me go to the A&E Department at our local hospital. There, finally, a doctor listened attentively, made a first, tentative diagnosis of anxiety leading into depression, and suggested things I could do alongside taking medication to aid real recovery.

Of all the advice that medic gave me, the suggestion that has been most instrumental in regaining my health was to meditate. I’d dismissed meditation in the past as “hocus pocus,” laughing at and pouring scorn on it. Something in me reacted positively to the suggestion that day, and I am eternally grateful for that.

The hospital, among other things, gave me a list of places where I could find helpful tools for meditating. Apps, recordings, videos. I decided I had nothing to lose and everything to gain, so I started following their guidance.

I burned through the resources the doctor gave me within a few days. That was enough to convince me that this could really help. I still felt anxious and depressed, but for the period of time while I meditated I got, for the first time in years, a real sense of relief that wasn’t alcohol-fueled.

Unsure of where else I could find guided meditations, something triggered in my brain and a thought emerged: “I am sure Buddhism has something to do with meditating.” I went onto YouTube and typed in “Buddhist meditation” and got a huge number of results. So began my real journey with mindfulness practice.

Meditation didn’t miraculously cure my anxiety and depression. As I said, I still live with them. But it offered a glimmer of light through which I felt certain I could better learn to cope and give a quality to my life that had been missing for years.

I can’t say specifically how meditation has changed things for me. I just know it has. I have read that the brain is plastic. That it can develop and change over time. The idea that activities like meditation help develop new, healthier, neural pathways makes sense to me. It’s almost as if the change has happened subconsciously. What I do know is that, as a result of meditating regularly, I’m calmer and better able to deal with crises than I had previously been.

As I made meditating a daily practice, I began looking more into Buddhist philosophies. They are what worked for me and it is eminently possible to get the same benefits from other philosophical teachings, both religious and not. One idea I hit on was the concept of not fighting negative emotions but rather befriending them.

This sounds counter-intuitive. When we get a feeling we don’t like, whether it be anxiety, depression, or anything else uncomfortable, we naturally want to run from it. This only strengthens the emotion, though, and does nothing to relieve it.

Perhaps that’s why people get locked in cycles of negativity. They fight the uncomfortable feeling, thereby strengthening it, so they fight it all the more. Round and round goes the vicious circle.

Instead, by accepting the emotion, letting it be, and recognizing that the feeling isn’t inherently wrong, that it’s just a sensation, it somehow softens it.

The first person I ever heard talking about this process was Yongey Mingyur Rinpoche whose quote I have cited above. He often speaks about how revelatory it was for his panic attacks, and so it has proven to be for me with my anxiety and depression.

It was this charming, charismatic Nepalese Buddhist who got me hooked on meditation. I specifically remember the moment I found his video “A Guided Meditation on the Body, Space, and Awareness with Yongey Mingyur Rinpoche,” on YouTube. With his gentle and humorous approach, I could almost feel his arms holding me as he guided me through the process. Despite meditating daily for the last four years, I still return to this video when I feel I need to get back to basics.

The belief that somehow anxiety and depression will up sticks and leave me is not something I possess. However, they don’t frighten me anymore, and I have learned to cope with them. I would wish them “good riddance” if they did pack their bags and go, but they don’t dominate me anymore. I live with them and they aren’t going to prevent me from enjoying a positive existence.

There is a wealth of resources available online that both talk through this novel concept and provide guided meditations on it. Some are religious or spiritual, though plenty of others are purely secular. It is an idea that can be used by anyone in whatever format they wish.

My life has changed because of these few, simple practices. I’m more content than I can ever remember being and like to think of this transformation as proof that anyone who suffers similarly can regain happiness. I would be lying if I said it isn’t hard work, or that there aren’t periods that are more difficult than others, but it is so worth it.

As a result of these improvements, I was able to kick my alcohol habit over three years ago, something that has also benefitted my mental health. Again, I found I felt better from not drinking, but this is not to say that being teetotal is an elixir for wellness. Plenty of people find a beer or a glass of wine actually helps how they feel, and if this is you, go for it.

This article is not prescriptive. I don’t believe anyone can offer a recipe for wellness, as it is dependent on the individual, and I strongly doubt that two people would ever find that what works for one, works exactly the same for the other. If the above text offers hope and nothing else, the writing of it will have been worthwhile.

Andrew is a freelance copywriter, based in Kilkenny, Ireland, who helps businesses craft promotional content to improve their reputation and sales. He can be found via his website. Andrew is also a qualified hypnotherapist. He draws on his personal and professional experience, in addition to his training, to help people overcome the obstacles life throws at them. For this work, he can be contacted via his hypnotherapy site.