How Expectations Undermine Our Relationships and Happiness
By Jen Picicci 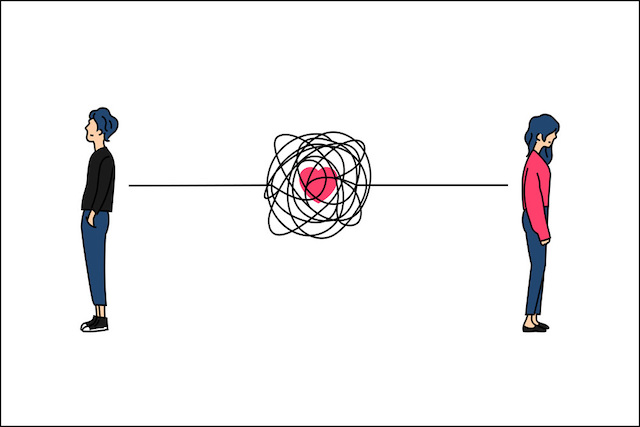 A few years ago, my husband was away from me for a few weeks, working in another town. It was summer, and we were living close to the beach at the time, so I often spent my Saturday nights walking along the ocean at sunset, enjoying the colors and sounds.

One Saturday night I was in a simply glorious mood. The beach was filled with happy families and couples, the Atlantic was a particularly lovely shade of aquamarine, and life felt just about perfect.

When I got back to my car I looked at my cell phone and saw that I had missed a call from my husband. I called him back and quickly realized his mood was not nearly as buoyant as my own: He wasn’t particularly chatty, and seemed pretty negative about the work he was doing.

I took this extremely personally and turned cold and quiet almost immediately, eventually taking the very juvenile step of hanging up on him. How dare he ruin my perfect summer evening!?

About ten minutes later, in the parking lot of a grocery store, I had a huge epiphany: He hadn’t ruined anything. It was all me, as my negative feelings were entirely created by my expectations of how he should have behaved.

I had been anticipating that he would be in the same great mood I was, and when he wasn’t, I took it personally. I became upset that he wasn’t acting as I expected. I became angry because he wasn’t meeting the standards I had set.

In other words, I was completely responsible for my deflated mood.

This was the very first time I realized how having expectations of how other people should act was causing unnecessary pain and suffering in my life. Once I started looking around, though, I saw many other examples.

For instance, I once had the expectation that a new acquaintance would quickly respond to my text and agree that she, too, had a nice time hanging out with me.

When she didn’t, I ended up spending more than twenty-four hours wondering if she liked me, feeling pretty bad about myself. (She did eventually respond with a very nice text; she’s just a busy person who doesn’t respond to texts immediately!)

I expected an automatic response, and not getting one undermined my happiness.

Another example is the time I was seventeen and gave my dad a Father’s Day card I thought he’d find really funny, and he barely even responded to it at all.

I had built up a vision of him having a really warm and amused reception to this card, and when there was almost zero reaction, I was crushed. Again, my expectations, and the beliefs about what it meant if they weren’t met, were causing pain.

Before you think that I’m suggesting you lower your expectations of other people and never, ask anything of anyone, let me clarify a bit.

Telling a friend about a tough situation at home and expecting you’ll get some words of wisdom is wonderful. Hoping the guy whose eye you’ve been trying to catch will smile at you today can be fun and rewarding.

Hoping for the outcome you desire is one thing, trying to force it and being overrun with negative thoughts and feelings when it doesn’t work out is another.

You can’t control the way people think, feel, or react. Ever. You may try to, you may want to, but ultimately, how they act is up to them.

And when you base your feelings of happiness, worth, or confidence on the actions or reactions of other people, you’re setting yourself up for many moments (or days or even years) of avoidable misery.

There are a few ways to keep hoping for positive interactions with other people, but not get sucked down into the mud and muck when they don’t go as you expect.

1. Stop expecting other people to act exactly as you would like them to—it’s a game you’re guaranteed to lose. Instead, try being open to any and all reactions from others.

If, on that gorgeous night back in 2012, I had opened my mind and heart to my husband with no preconceived notions of what his mood should be, my evening could have remained joyful and I may have even improved his evening, too.

Back when I was seventeen, if I had realized that my dad’s lack of reaction had nothing to do with me, but was about his own problems with expressing emotions, I would have felt far less hurt. I couldn’t make him react the way I wanted, and assuming he would do what would make me happy led to a sad experience for me.

2. Start building up your own happiness and confidence on something you do have power over: your thoughts and beliefs.

When someone does the unexpected and it disappoints you, it’s always because you had a belief about what they were supposed to do.

You believe that your mother should have been proud when you won the essay contest, and when she wasn’t, you were sad. If, on the other hand, you lean in to the truth that your mother can react however she wants to, but still believe you are a wonderful writer anyway, your pain won’t be so great.

You believe your son should have gotten better grades, but when he brings home a poor report card, you feel angry and guilty. When you stop believing that your son’s grades are a reflection on you as a parent, and start believing that you’re doing the best you can and letting go of guilt, you suffer less.

3. Stay in the moment as often as you can.

Stay present with your thoughts, and see if you’re holding onto expectations of how other people should behave.

It’s when you slip out of being in the now that you are truly disappointed. When this happens, you’re letting your thoughts and stories about what the other person should have done, or what will happen now because of this perceived slight, or why you deserve to be angry, take you out of the now and down a path that is full of rejection and fear.

The bottom line is that you will not find peace if you’re always expecting other people to give it to you with their actions or words or even love. The only way to find it is to drop your expectations of others, let go of what you think they should or shouldn’t do, and allow yourself to create your own happiness.