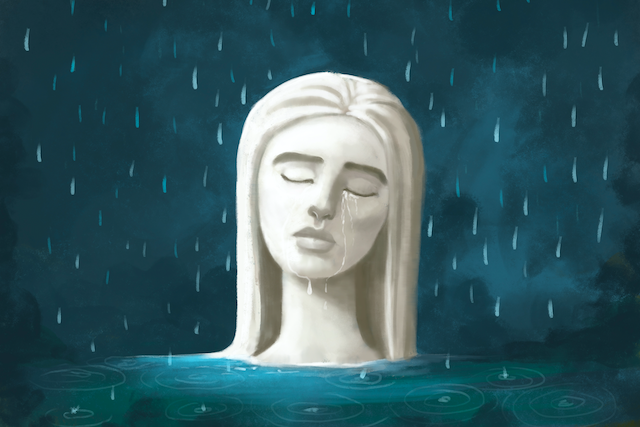 “If we can share our story with someone who responds with empathy and understanding, shame can’t survive.” ~Brené Brown

The embarrassment you feel upon realizing you don’t actually have what it takes to make a success of yourself. The shame of knowing you spent years training to do one thing and then you bailed right at the finish line. The fear of what to tell people when they ask you what you’re up to.

Of course, you don’t tell anyone how you feel, as you’re too embarrassed to admit you even have these feelings, so you just bury it all away.

I know these feelings all too well, as I’ve been through them all. It took me years to finally face up to what I actually felt and deal with it. As a coach once told me, “Buried emotions never die.”

I knew I always wanted to be in the arts. I loved dance and drama, and I wanted to be an actor. I could feel it so strongly that I never even considered a different career.

I started dance classes at the young age of six, and at eleven years old I went to a performing arts school. So my training began.

After school I went to a reputable college where I did a further three years of training. I was sixteen years old and was told to lose weight and wear heels and make-up. I didn’t realize it at the time, but this wasn’t the healthiest thing to tell a teenager.

After three exhausting years I graduated. All the training, the hard work, the sacrifice had led up to this moment. I was going to get an agent, start working in theater, and move into TV and film.

But that didn’t happen.

Instead of going full steam into my career, I froze. The last term of college crushed me.

The last term all led up to our final show. The show ran for a few weeks in different locations around the city, and it was meant to be an opportunity for us performers to show off our talent. Everyone was meant to invite agents in the hopes of getting signed.

However, I didn’t invite anyone. I was so ashamed of my performance. I felt I had been cast in utterly the wrong role, and no matter how much I tried, I just couldn’t make it work, and no one seemed to care.

I remember wishing I would fall down the stairs of the tube station so I would break my leg and not have to perform; I was so humiliated.

Rather than leaving college confident and excited, I left with my confidence at rock bottom.

For years I told myself that the last term was so tough that it broke me, and that is why I never continued after college. I blamed everyone else.

It took me years to admit that it was actually my decision to quit. It took me even longer to understand why that was. I realize now I was scared.

In fact, I was petrified that I wasn’t as talented as I thought I was. I knew if I put myself out there and tried to make a career out of it and failed, I would have proof that I wasn’t talented.

If I blamed everyone else and quit before I got started then, in my head, I could always be amazing and could have always potentially had a career in the arts.

Emotions are so complex, though, that it took me a long time to dig deep enough to find this truth.

Thus, I found myself aged eighteen years old, with no formal education, and all I had ever wanted to do was perform, so what now? I was totally lost.

I just froze. I didn’t get an agent; I didn’t go to auditions. I just quit.

I had spent my entire life working toward this moment, and at the final hurdle I fell. It really shook me up; I felt like an utter failure and was humiliated.

I was so ashamed and embarrassed that I stayed in contact with no one from college, except two friends.

I remember walking down Oxford High Street and seeing two of my former classmates. I jumped into a shop to hide from them because I was afraid they would ask what I had been up to.

All I could think was, “What would I tell them?” They were probably off in West End Shows, and what was I doing? I was a failure. Of course, this was before social media, so no one knew what I was or was not doing.

Eventually I decided I would take some time out and go to Thailand. I ended up spending a year there. I became a diving instructor, and I met the man that would become my husband.

Once back home, I got a job in recruitment and my career went from strength to strength. I thought I had moved on and was happy with my life.

Yet whenever I would meet someone who asked about my education or what I did at school, I would panic. “What do I tell them? How do I explain that I trained, but never turned it into a career?” They would know my dirty secret, that I was an untalented failure.

I would lie and make up stories as to why I decided to change careers after my education.

I couldn’t understand why I still cared so much about this. Why did I feel I had to lie?  Although life was great, deep down I felt that something was missing. It sometimes felt like there was a dark mass in the pit of my stomach.

I had a session with my coach about this feeling, and what came up? The arts, my love for dancing, my failed career, my shame, my embarrassment. I remember breaking down in tears. I was so angry that twenty years later I still hadn’t moved on.

I was so angry that this was still such a big thing in my life. That it was still there with me. I just wanted it to go away. It felt pathetic that it still had such a huge hold over me; what was wrong with me? I just kept saying, “This is so ridiculous, why can’t I just let it go?”

I was so confused by it all, I didn’t understand why it still had such a hold on me. Why I felt so embarrassed and full of shame. My coach helped me unpack it all.

The lies I had told myself had become so much a part of me; I had to work hard to pick it all apart to find the truth.

After so many years, I was finally able to face up to what had happened. I was just a scared teenager. I was so scared of failure and rejection that I found a way to protect myself by making up a lie and quitting.

I needed to make peace with this, and I needed to accept responsibility. I found this hard to do, as I didn’t like this version of me. It was much easier to blame everyone else than to see it was my fear that stopped me.

I needed to forgive myself.

I stopped telling myself lies and admitted that when I graduated, I was petrified of failure, so I quit before I could fail. I realized I still had a love for the arts and I needed to find an outlet in my life.

It was hard work and took many sessions to really dig into the truth, but once I did, I was finally able to talk about the arts and my past without shame or embarrassment. I could finally move on.

I know I’m not alone in what I felt and what I went through. I wish I could have started this healing process a long time ago because as much work as I have done, I know there is still more to do.

For anyone who is experiencing what I did, know that you’re not alone and you’re not silly for feeling the way you do. Also know, you can change it.

I learned so many things in the process.

You can’t just ignore what you feel.

At the time I was so confused by what I felt. Instead of trying to understand what was happening, I just buried everything.

Eventually I had to look my shame and embarrassment in the eye and understand what they were telling me about myself. What was the message?

There is always a message behind your feelings and emotions; you just need to be brave enough to hear them. I found journaling really helped with this.

If, like me, you have already spent years ignoring what you felt, that also means you’ve likely spent years telling yourself lies. What you are feeling is complex, and it will take time to work through it. Don’t expect an overnight change.

Things still come up now that I have to work through. Human beings are extremely complex, and it takes time to break through all our barriers.

Share what you’re feeling because you won’t be alone.

I remember telling my old manager about how I felt. He had the same background as me, and he said, “Alice, I felt exactly the same way.” He told me he moved cities just to get away from people he knew.

Just hearing that made me know I wasn’t insane. It was amazing to hear he understood.

We hear it all the time, but sharing what you’re going through really does help. So share your story.

Stop punishing yourself and have fun.

For anyone reading this who can relate, you have likely boxed away something you loved. It’s time to take it out of the box and allow yourself to have fun again. You don’t need to keep punishing yourself.

I didn’t allow myself to dance for years. It was too painful. However, my body was screaming out for it. I realized it wouldn’t be a career, but that didn’t mean I had to cut it out of my life completely. I could still enjoy it.

It’s been a long journey for me. Mainly because when I quit twenty years ago, I had a rush of feelings and emotions, and I didn’t know how to deal with them, so I pushed them away and lied to myself. It took a long time to undo all the stories I had told myself.

You don’t need to be embarrassed or feel ashamed, but also know it’s okay if you do feel this way. Just don’t hide from these feelings. Understand them, embrace them, and make peace with them. That way you can allow yourself to move on.

Alice works with women to rediscover what really excites them in life. Focusing on career transitions, Alice helps women to reveal their suppressed dreams and explore if and how they could be their new reality. She works from experience, having herself locked away her own life dreams only years later uncovering the damage it did. Book a call with Alice to find out more and join her newsletter for your weekly dose of motivation and practical tips.