How Self-Care Can Actually Save the Planet
By Suzanne Falter 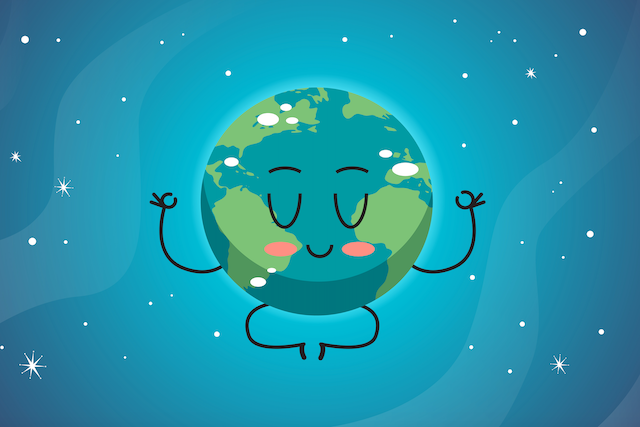 The morning the sky turned red and the sun didn’t come out, I decided I wanted to sell my car. In a strange way, it seemed like an ultimate act of self-care.

Mind you, my wife and I are a two-car family and neither of us commute in the traffic-clogged Bay Area. So losing a car wouldn’t be a hardship. Instead, it would be a frank statement of living my values. A way to stage my own protest and live true.

I now understand this is what my friend John was all about.

I knew John some years ago when I lived in the Adirondacks, and he was a career environmentalist. And instead of driving everywhere, he rode his bike everywhere 365 days of the year. Up and over mountains. In the pouring rain. All the way to the grocery store and back, many miles away.

I’ll never forget seeing a blurry smudge up ahead on the road one snowy day. There was John, gamely pedaling his way up a hill in a snowstorm. At the time, I thought he was nuts. Maybe even a little dramatic.

Now I think he is wise and admirable. Because even back then, John really got it. We are truly living in an emergency.

This is why creating a lower-consumption, greener life with a smaller carbon footprint is the next arc of my own self-care. For what is true self-care but returning to the often-quiet whisperings of your own internal voice? Turns out, she’s been asking for this for quite a while.

All it took for me to turn this switch was waking up to a strange, dark Oakland morning recently. I looked at the clock and it was well past 8AM. Yet my entire bedroom was as dark as if it were 2AM.

I sat up, confused and uncertain. I suspected historic wildfire pollution in the upper atmosphere from was responsible… but this was extreme.

What the hell was going on?

I took out the sleepy dog, who was equally befuddled. When I tried to rouse our urban chickens, they wouldn’t emerge. Instead, they stayed on their nests, clucking quietly and believing, like me, it was still the middle of the night.

I walked out into the front yard and looked around. The sky was a weird dystopian orange, and I looked at it bleakly. That’s when I became completely and totally afraid. Clearly, the world was seriously broken… and if I didn’t get it before, I sure as hell did now.

I began to cry. All of California was now burning or severely polluted, freak acts of nature were now the norm, and I felt smaller and more powerless than ever.

The dreaded future we’d read so much about, and had assumed would never happen in our lifetimes, had indeed arrived. There is no putting if off anymore.

And yet. In falling apart, we often can be quickly and sometimes radically reborn. I learned this lesson when my daughter died eight years earlier, and I was forced to reinvent my life and my work. I discovered self-care at the time, a practice I’ve since written about extensively. Now a new awareness began to sink in.

That morning, I sat myself down and assessed the situation. I wondered if it actually was possible to weave self-care into my new, very urgent sense of environmentalism. Or perhaps this was the new self-care, version 3.0?

Because now I know I need both, very, very much.

Here is what my new ‘green self-care’ practices look like. First of all, I am only willing to live my values now, and not someone else’s. That means I put myself and the earth first, before the entreaties of corporate entities, like oil and gas companies, that don’t have my best interests at heart.

I’m beginning to realize my fealty to them has been purely habitual, like thinking of my bike as an “only sometimes for exercise” ride.

My new commitment means I will drive a lot less and now rely mostly on walking or riding my bike. My city has lots of lovely walking and bike paths, and I know how to use them. When I have to hitch a ride, I can drive with my wife or friends. There’s a bike sharing station just down the street, and I’m no stranger to public transportation, so I’ll use that as well. One way or another, I’ll get where I need to go.

Here’s the self-care angle: all that walking and biking is bound to be good for my body, right? When I lived in New York City and San Francisco, I walked many miles and rode the subway or bus every day. I never owned a car. So why did I need to now?

I’m cutting red meat entirely out of my diet. While I’ve often said I was going to do this, I would cave to the occasional burger or lamb craving. But now meat is officially off the table. I’m even thinking I will take the plunge and try going vegan for a month, to completely remove cows from my life. The health benefits are obvious.

There are also all the low-consumption tricks we can do in our homes, and some merge nicely with self-care. Washing your clothing in cold water preserves the fabric a lot better, and hanging clothes to dry in the sun adds a peaceful touch of Zen to the day. Reducing your dependency on screens gives your brain and your eyes a much-needed rest, while it reduces stress on the power grid.

In fact, unplugging from the myriad sources of electronica will make my life far less stressful in general. Do I need to deeply immerse in social media and news feeds of all my devices? No. Instead, I can turn them off and return to reading good old books, and journaling in my notebook. I can start playing my piano again and do more jigsaw puzzles. I can call my sisters or old friends just to chat. Meditating seems to be a fit here, as well.

I can see plenty of walks in nature in my future, too. But this time I won’t be so focused on rushing along for the sweatiest workout.

Now I’m inclined to move slowly and savor the natural, but fragile beauty around me. Which is, not coincidentally, what researchers have decided is essential for optimal brain health. Not to mention an excellent way to beat anxiety and depression.

Can it be that by simply embracing green practices, my own self-care will be kicked up a notch as well? I say yes. And now I’m ready to develop an entirely new set of conscious, healthy habits.

I suspect I will not dive into them all at once, in one sweeping, radical do-or-die move. Instead, I will ease my way along, experimenting with what works and what doesn’t, so I can build a truly sustainable new set of green self-care practices.

At the very least, it’s not only what I want and need. It’s what the Earth clearly needs as well.

Start Your Day Right with the Magic Morning Mindset