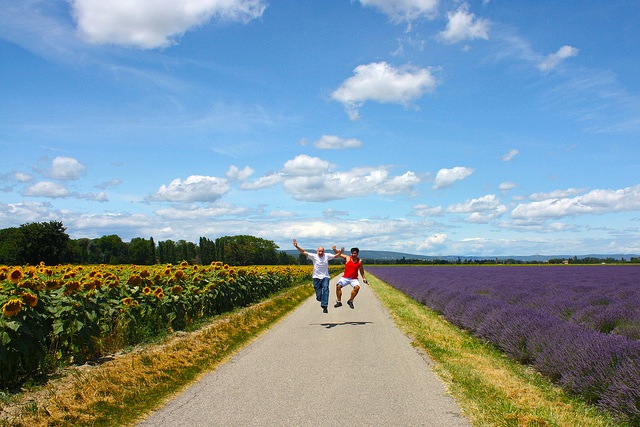 “What you do today can improve all your tomorrows.” ~Ralph Marston

For as long as I can remember, I’ve been an anxious person. My grandfather died when I was four years old and some of my earliest memories consist of panic attacks whenever I was left alone. In my mind, I had to keep my loved ones in sight at all times, so there would be no chance of them disappearing, just as my grandpa did.

From that point on, I slowly began to overcome my fears of separation from family. However, new anxieties began to take its place. Whether I was nervous about meeting new people or panicking over unexpected change, my anxiety was all consuming and seemingly endless, without an outlet.

Somewhere in my senior year of high school, a friend suggested that I should start exercising to relieve some stress. The first day in the gym was a source of anxiety in itself. Between checking in, finding an open machine, and deciding what to do next, the entire process was entirely overwhelming.

For a while, I was too nervous to step foot in the gym without a friend with me because I was too scared to be left alone with my thoughts for too long.

Separation from familiar people is a scary thing in a time where you’re constantly connected no matter where you are. You can be standing on a mountaintop seemingly alone, but with thousands of people in your pocket.

With this being the new reality, any time of time to yourself can be a source of anxiety.

Eventually, I learned that being alone sometimes is a good thing. Each day I would step outside of my comfort zone and try something new. Some days it would be a walk around the block with only my dog and some silence. Other days, it was taking a yoga class by myself.

Some of my challenges were harder than others. I found that taking classes in my gym enabled me to ease into workouts on my own.

Although some days were successful, on others I would have serious setbacks. The worst of these was abandoning my workout because I knew someone who was working out and I was too embarrassed to complete my workout with them there.

After years of being mocked for my lack of coordination, I feared judgment and began to feel that all eyes were on me during every move I made.

Somewhere along the line I had a major realization: Only I can make myself happy. Stressing over a situation will in no way change it, and being self-conscious in the gym definitely wouldn’t get me in shape.

While this realization pushed me to keep going, it didn’t resolve all of my fears. In the beginning I would still worry about what others thought and spend time stressing over every situation that was slightly outside of my comfort zone.

Small steps on a daily basis gradually enabled me to be more comfortable with myself, both inside the gym and out. I slowly became more confident and frequently engaged in more situations that I never before imagined doing.

At the beginning, my exercise was meant as means to relieve stress but only ended up causing more. I think this is because I didn’t do it for the right reasons. I sought out exercise as a cure-all that would wipe away my problems with only a few visits to the gym.

Over time I began to see exercise for its greater meaning. It could be a short-term reliever of anxiety, but it was a life long journey toward better health. As soon as I started to see it that way, my fear diminished.

This journey forced me to try to be a little better each and every day, to be stronger mentally and physically than I’ve ever been before.

Many people think of exercise as a way to strengthen your body and calm your mind. Over time I realized that wasn’t what I needed. I needed to strengthen both my body and mind, and I had to do so through challenging both.

I could have easily have gotten in shape in my basement as many others do, but that would not have challenged my anxious mind. I would have felt safe and calm in the confines of my comfort zone.

The best thing I ever did was get that gym membership and force myself to get there. It not only led to a love of physical activity, but it also led to a feeling of confidence that I had never before experienced.

Anxiety is a tough thing to deal with. It makes you feel guilty and scared, and it can keep you from doing things you love.

While my anxiety never truly went away, it no longer controls or defines me. The best way to reduce the impact it has on you is to try your hardest to step outside of your comfort zone whenever you can.

Even though it feels frightening at first, doing a little more each day can help make it seem less overwhelming. Over time, you’ll be able to do things you never knew were possible. Time and effort will make your journey easier and lessen the burden of your struggle.

For me, making the active decision to push myself is what got me through the worst of my anxieties.

Now, when anxiety tries to challenge me, I know that I’m the stronger one.

Melissa Colleary is an English major at Long Island University. She spends time drawing awareness to body image issues and writing about her search for mental and physical health. She blogs at www.thekbfairy.com.

How to Gently Coax Yourself Out of Your Comfort Zone