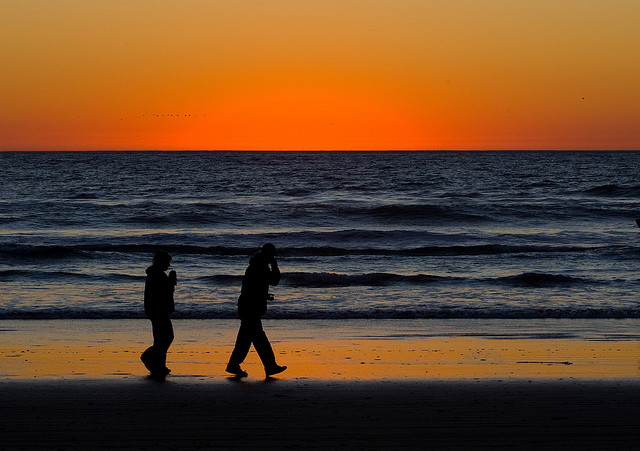 “We need not think alike to love alike.” ~Ferenc David

Our commonalities were small, insignificant perhaps, but being in high school, we were both uninterested in comparing notes on religious beliefs or political affiliation. I appreciated his humor and he my smile, and that was the end of that—until we became bona fide adults, that is.

After a year of bliss and a few declarations of, “no, we don’t fight at all!” we began to notice the things that set us apart and the experiences that shaped us in vastly different ways.

He came from a broken family while mine was still firmly in tact; he was staunchly conservative while I leaned more to the left; I could be labeled “New Age,” while his religious upbringing was more traditional.

Firmly rooted in what I believed to be “right,” I ignored the differences in hopes that we could eventually learn to think and believe the same way.

With these monumental differences laid out in front of us, we had every reason in the world to say our goodbyes and move on. But it was in our decision to stick together that we learned far more about who we were as individuals than we would have had we found carbon copies of ourselves.

We certainly didn’t think alike, but we loved alike. And in doing so we both learned some of life’s sweetest lessons.

Lesson #1: Right and wrong is a matter of perception.

When it comes to religion and politics, most of us choose what we think is right. The right way to run a country, the right way to reach a higher power—the list is extensive. But oftentimes our idea of what is right is simply a perception that stems from our life experiences thus far—how we were raised, what we learned in school, and what type of community we grew up in.

This doesn’t mean that our beliefs as individuals aren’t valid. It simply allows us to paint the world in shades of gray instead of strictly in black and white, thus opening the door to acceptance and growth.

So convincing others that what we believe is right isn’t our job. Our job is to respect that other beliefs, opinions, and thoughts are worthy of consideration too.

It’s in our nature as humans to gravitate towards those who have interests similar to our own. And in many ways, this serves us well. On the other hand, it doesn’t leave much room for experiencing all that life has to offer.

Shortly after high school, my significant other joined the military, taking me on a journey that I wouldn’t voluntarily have chosen for myself. Along the way I met people and did things that have profoundly shifted my view of the world for the better.

I wouldn’t have had the privilege of experiencing these things if I hadn’t been willing to look beyond what was familiar.

By opening ourselves up to another way of living and being, we can make more educated decisions about what we want our own lives to look like. These varied life experiences allow us to express ourselves more fully and be more authentically present in the world.

Lesson #3: Problems we see in others are issues we have with ourselves.

When relationships reach a rocky patch or fail altogether, it’s easy to cite another person’s flaws as the culprit. Pointing fingers is, after all, far easier than self-examination.

Yet, if you recognize that all your relationships, romantic or otherwise, serve as a mirror for yourself, you’d realize that these “flaws” are present in you too. Getting angry or irritated after recognizing them in someone else means that you are denying them in yourself and not fully accepting the “bad” with the “good.”

With personalities on opposite ends of the spectrum, there were things I saw in my significant other that I would have given anything to change. And in concentrating on them, they seemed to grow, expand, and become even more irritating. But if I accepted and loved them in him and in myself, they seemed to dissipate.

While I never sat down to write a concrete list of qualities I expected in a mate, from the time I was young I carried with me the idea that when two people entered into a relationship, they were meant to fit together like pieces of a puzzle. Destiny, I thought, should be easy.

What I learned is that fitting together doesn’t mean finding yourself in someone else. It means learning to reexamine who you thought you were and bending to grow together. It means seeing the world through a different lens, and accepting that you may not have all the answers.

It’s not easy. But the most worthwhile things rarely are.

Kayla Albert is a freelance writer and content strategist who left her corporate job to build a life without creative restraint. You can find her at www.kaylaalbert.com or follow her on Twitter: @KaylaAlbert33.

5 Things to Remember When You Feel Ashamed of Your Flaws

When You Don’t Fit In: The Value of Being Different