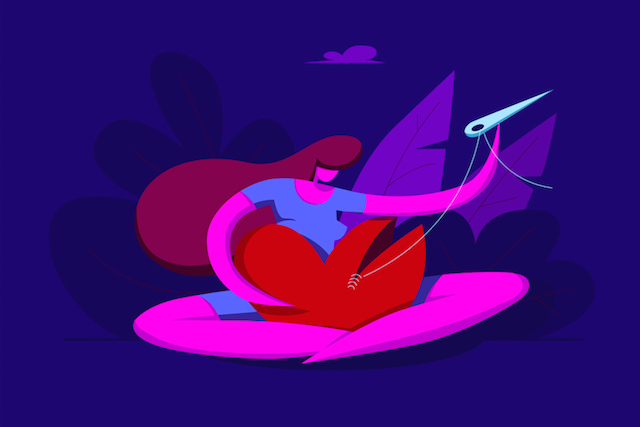 “Sometimes things fall apart so that better things can fall together.” ~Marilyn Monroe

I knew it was over and yet I stayed.

In my eyes, my relationship had run its course. I was fed up, tired, and emotionally drained, but I couldn’t get myself to pull the trigger. I didn’t know how to go through with it.

Because this was my first serious relationship, everything was new to me, including breaking up. He was my first love. We lived together, built a life together, and now I was throwing a wrench into all of our bright plans for the future.

After being with each other for over five years, our relationship had seen its ups and downs (as most relationships do). By that point, though, the honeymoon phase was a distant memory and our interactions with each other had devolved into petty fights, low blows, and toxic behavior.

I was lost, confused, and unhappy, until finally it hit me:

We weren’t right for each other.

But still, I waited. For six months, in fact, until I reached a point when I couldn’t take it anymore.

That day, I sat my boyfriend down and told him exactly how I felt and that I was done. Through protests and tears, he packed a bag and moved to his mom’s house until I could figure out a different living situation.

The separation didn’t last long though.

I thought I’d be relieved to finally go through with the breakup, but my boyfriend’s reaction made me second-guess myself. I’d assumed that he was as fed up as I was with our relationship and, when I realized he wasn’t, the doubt crept in and I was even more confused than before.

So we tried again. This time, going to therapy with the hopes of working through our problems, but that didn’t work either.

A few months later (nearly a year after I realized that I wanted to break up in the first place), my boyfriend and I finally ended things for good.

I was left looking back at my relationship and wondering:

How could I have put myself through that? Why did I stay as long as I did? What would I do differently if I were to do it again?

Here’s what I wish I knew at the time.

1. Accept your feelings as valid.

It’s easy to get lost in your relationship and sacrifice your needs for the sake of your partner’s. That’s exactly what I did.

Instead of listening to my feelings and breaking up with my boyfriend, as I should have done, I doubted myself. Even when every fiber of my being was telling me “it’s time,” I held back and made excuses.

I was so worried my feelings could be wrong or temporary, and that I couldn’t trust myself. Could I be making a huge mistake I’d regret down the road?

Then I would think about my boyfriend’s feelings—how I was causing him pain and making him suffer. So why wouldn’t it be better to stick it out for his sake?

These anxious thoughts running through my head did nothing but keep me trapped in a cycle of fear, pain, anger, and frustration.

The bottom line was that I was unhappy. And I knew, somewhere deep inside, this wasn’t going to change.

After years of putting my feelings on the back burner, it was a hard reality to accept. But going through this process made me realize that I couldn’t stay in a relationship with someone I simply wasn’t happy with. It wasn’t fair to him or to me, and it left us both feeling miserable.

Sometimes you have to be a little selfish and put yourself first, and ending a relationship is one of those circumstances.

You also have to push through the fear that you may be making a mistake and trust that you truly do know what’s best for you. That doesn’t mean you’ll find someone else right away or you’ll never feel lonely when you’re single. It just means you know this particular relationship isn’t right for you, and it’s better to be with no one than the wrong one.

It may be difficult, but, through my own personal experience, I’ve found that the initial feelings I had a year before my official breakup are how I feel to this day. If I had listened then, I would have saved myself a great deal of trouble.

So if you’re struggling with the idea of a breakup, take a step back and focus on yourself. Be brutally honest with yourself and write down exactly how you feel without holding anything back.

It can be scary to face the facts, but if the same feelings pop up time and time again, then it’s time to listen. Your gut is trying to tell you something.

When the bad times outweigh the good, something needs to change.

My boyfriend and I shared a lot of good times together throughout the years. When we weren’t fighting about something, I thoroughly enjoyed his company and cherished the rare moments of peace we had together.

Even though the good moments in my relationship were far and few between, I would cling to those moments to justify my staying. Just when I thought I’d had enough and felt clear about my decision to leave, I would remember those happier times and my mind would instantly become clouded.

I idealized what our relationship once was instead of looking at it from the present circumstances. And the fact of the matter was that there wasn’t enough good to outweigh the bad.

So I made the decision to focus on the now.

Instead of allowing the past to creep in and fill me with doubt, I needed to face the facts and look at where my relationship was at that point in time. Doing so helped me pull away from my tendency to idealize the past and helped me move toward accepting the breakup for it what it was.

If you find yourself in a similar situation, shift your focus to the present. Think about where your relationship is currently and how you feel about it in the moment.

3. Create actionable plans for the future.

Fear was my biggest enemy during my breakup. I was absolutely terrified of what the future had in store.

Over the years, my boyfriend had become a crutch for me to rely on. We had developed an unhealthy level of codependency that was difficult for me to pull away from, mostly due to worries I had about being on my own and navigating life without a partner by my side.

The uncertainty of the future, while exciting for some, left me frozen with terror.

Questions like these ran through my mind on a loop, filling me with anxiety that left me feeling trapped.

It wasn’t until I created a concrete plan that I was able to gain the confidence to finally take the necessary steps toward independence.

To combat the overwhelming list of tasks involved in breaking up, I broke my massive to-do list down into smaller, actionable steps.

For example, because I was living with my boyfriend at the time, I needed to find a new place to live. The first step was to figure out where I wanted to live and how much I wanted to spend. Then I needed to devote time to looking at listings and viewing apartments. Once I found a place, then I could shift my attention to packing and so on and so forth.

Breaking tasks down into smaller steps allowed me to focus on one thing at a time, which, in turn, gave me the confidence to move from paralysis to action.

So if you find that the thought of a breakup is too overwhelming, write everything you need to do down onto a piece of paper. Then break those tasks down into smaller steps so that it becomes less intimidating.

The road to accepting a breakup can be a long one. When worries, fears and doubts creep in, change can be that much more difficult. That’s when it’s important to look inward and focus on what’s happening inside of you.

The moment I shifted my focus onto myself, I was able to overcome my hesitation and make a clear decision. And today, the only regret I have is that I didn’t do it sooner.

Every relationship is different and everyone has their own path to discovering when it’s time for things to change. The key is to be able to tune in to that moment if and when the time comes.

Once it’s over and the dust settles, you’ll realize that breaking up isn’t always so bad.

When You Reframe Your Breakup as an Opportunity, Everything Changes

A 7-Step Plan for Finding Love After a Devastating Breakup

How to Recover from Heartbreak and Feel Whole Again