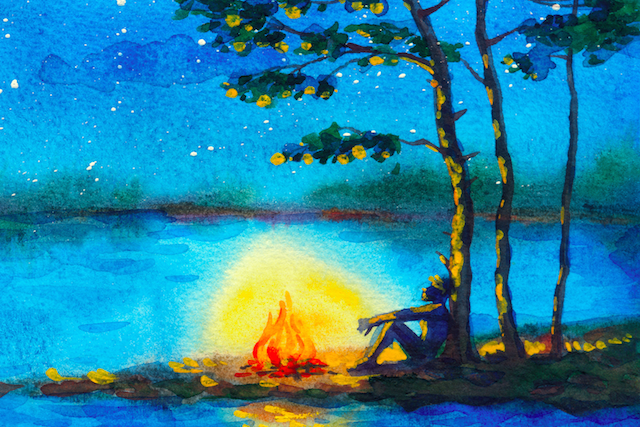 “Not all those who wander are lost.” ~J.R.R. Tolkien

I will always remember those words.

I had just decided to ditch my old life. Instead of pursuing a cushy career as a lawyer, I wanted to create a business as a freelance writer because it felt like a fulfilling thing to do.

“You’ll never make it work. You’ll regret your decision,” a loved one told me.

Those words pushed my buttons. I felt scared.

What if I would regret it?

Was I stupid, even delusional, for thinking there was an alternative to living a pre-planned life with a secure nine-to-five and a mortgage?

Maybe I did think too much of myself, my abilities, and my potential? Maybe I was setting myself up for disaster?

How to Find the Courage to Live a Life You Love

Doubt is everywhere, isn’t it?

People around you expect you to live your life in a certain way.

Go to a good school, get a job that pays a comfortable salary, buy a house…

And if you don’t? If you break the norm and live life differently? Whether that’s driving around the country in an RV, becoming a full-time yoga teacher in the Himalayas, or starting a passion project…

Let’s put it this way. You will see a lot of raised eyebrows and hear a lot of surprised questions and doubtful side-remarks.

I’m sure you know what I’m talking about. Comments like:

“Why would you want anything other than what you already have? Don’t be so ungrateful.”

“There is no way that will work out.”

“Are you sure this is the best thing to do? Wouldn’t it be better to just stick to where you are now and see how it pans out?”

The problem with constantly being questioned by everyone around you?

Well, let’s take me as an example. When I heard those doubtful words (and many like them), I took them to heart.

I subconsciously started believing them and created what in psychology is known as a self-fulfilling prophecy. When you believe something about yourself, that influences what you do and, consequently, your results.

For example, if you internalize what others say about your choices, you won’t believe you can succeed. And that means you won’t, because you’ll never even get started.

But here is the good news:

You can get past all that doubt. You can find the courage you have within you to not only take a step forward but also to live life fully without looking back. Here’s how:

1. Find positive examples around you.

Think about someone who has succeeded at what you want to do—someone with a similar background, resources, skills, etc., or even fewer advantages.

If they have succeeded, why couldn’t you?

Let me tell you a secret (shh, no one else will know!):

If someone else has done it, you likely can, too.

I realized this early on.

While, yes, the people around you might not understand how you can succeed, it’s enough that you do.

This was a tool I used to stay confident and focused whenever someone told me (or hinted) that I should give up on my dream.

I sought out and thought about people who had already made it happen.

People who weren’t so different from me.

If they could do it, I could, too.

2. Send love and light to everyone around you.

In Eat, Pray, Love, Liz Gilbert gets the following advice to get over David, her ex:

“Send him some love and light every time you think about him, then drop it.”

One of the biggest insights I had was that people don’t doubt us because they want to hurt us.

No. Instead, they’re probably concerned about us.

After all, if all their life they have only seen one thing work, it’s hard to see past anything but that way of life.

Or maybe they’re projecting their own fears and insecurities on us.

We love security above almost anything else.

If you defy that security, it makes you odd.

So when they doubt you, it tells you nothing about your own abilities, but everything about their own fears and insecurities.

However, their words can have a purpose. Maybe it’s to shatter your ego a bit so that you can come out of it stronger. Or it’s to give you a few bumps along the way so that you won’t get comfortable and take things for granted.

Whatever it is, use the advice that helped Liz live in peace to get past their words.

Send them love and light, then drop it.

Other people’s words define you only if you let them.

At the end of the day, you create your own reality.

Words are just words. You might say someone is “too straightforward,” but someone else might be appreciative of that person’s honesty.

I can’t tell how much this helped me move past all the doubt.

Yes, there were people expressing their subjective reality.

But it didn’t have to be mine.

I realized that I get to define who I am and what I’m capable of. And so do you.

For example, if someone told you that you are “too emotional,” that doesn’t mean that you are too emotional or that being emotional is even a bad thing. That’s just their perception based on their unique set of beliefs, experiences, and projections.

So how do you remind yourself of what a miracle worker you are?

Write down all the things you appreciate about yourself. They could be qualities you like or nice things others have said about you.

Someone that awesome has a high chance of succeeding with whatever they choose to do, right? Or at the very least, that person will learn, grow, and have one hell of an adventure.

4. Become that supportive person you want in your life.

If you’ve been allowing doubters to hold you back, it’s time to start letting supportive people into your life.

People who cheer you on and make you believe you can do everything you want to do, and more.

Well, it can all start with you.

When I started offering encouraging words to others, I began attracting people who gave appreciation back.

The most striking example was when I emailed someone whose writing I had found online and enjoyed. I told her how much I appreciated it. She wrote me back and thanked me… and we’ve been friends ever since! Not only that, but she’s had an incredibly positive impact on my life by being extremely supportive and encouraging.

That’s it. These four steps helped me get past doubt, find my courage, and live life as I want to live it.

Today I’m able to work and live anywhere and live a flexible and (in my definition) free life. I couldn’t be happier that I stuck with my decision.

What’s that one thing you’re keeping yourself from doing?

Practice these new mindset shifts daily. Soon enough, you will find that courage you have within you to live life exactly the way you want to live it.

Camilla Hallstrom is a freelance writer who helps others work from anywhere so that they can live life in a more flexible, free, and fun way. Get her free 3-step plan to starting your own freelance writing business in 30 days or less (even if you have no experience).