How to Make Anxiety Work for You, Not Against You
By Anonymous 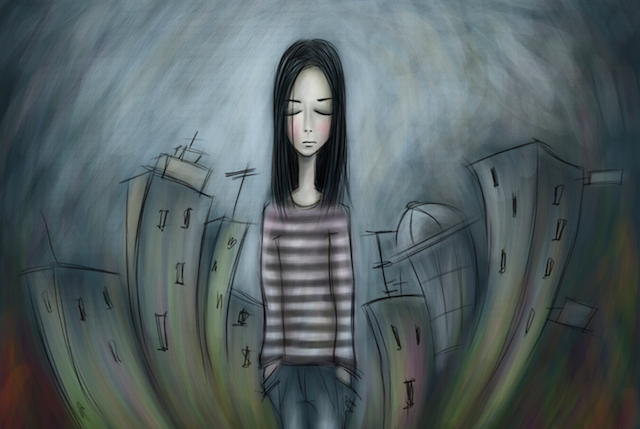 “Growth begins when we start to accept our own weakness.”  ~Jean Vanier

I got fired from my job, my boyfriend left me, and my father died in one day.

In reality, my career was going super well, I didn’t have a boyfriend, and my father was amazingly healthy, but what I did have was something I call an ultra amazing imagination, where I would make up fascinating stories about things that could happen and worry about them. (Or as other people call it, general anxiety disorder.)

I met my now BFF anxiety when I was about ten years old. Initially, she wasn’t that much of a drag, except for casually letting me know that I should dread going to school on Mondays because something terrible was going to happen.

I didn’t understand why she was telling me this.

Rationally I knew it wasn’t true. I loved school. But I couldn’t get her words out of my mind. I tried explaining what was happening to my sweet and caring father, but the only words I could get out were: “Dad, I feel bad, and I don’t know why.”

Anxiety took the liberty of moving into my room and accompanied me through my teenage years and twenties. She had black greasy hair that covered her face, and shrivelled, pale white skin that looked like it was starving for something. I just didn’t know what.

The more I ignored her, the more she dug her dirt-filled, jagged nails deep into my bare skin.

There was nothing I could do to escape her. I obviously couldn’t tell anyone. She assured me people wouldn’t understand.

Besides, I had grown used to the feeling of having knots in my stomach every day and the sleepless, nightmare-filled nights. If I didn’t have these experiences anymore, who would I be?

That’s until I turned thirty and had, well, as public speaker and shame researcher Brené Brown calls it, a spiritual awakening (a breakdown). I had reached breaking point and realized I couldn’t live the rest of my life like this.

There had to be another way.

I did all the typical things people do when they have a spiritual awakening.

I journaled profusely, saw a psychologist, joined an eight-week mindfulness-based meditation class for people with anxiety and depression (I took the class three times), and learned something called Psych K to change my subconscious beliefs about myself.

These things helped immensely. But what really changed the way I felt about anxiety was watching, wait for it, a teen, Hollywood, science fiction movie—Insurgent.

(Warning, spoiler alert). There’s a scene in the movie where the main female character, Tris, has to pass a variety of simulations to escape a futuristic prison she’s been captured in.

The particular simulation that changed my life shows twenty-something, short-haired Tris standing face to face with her beautiful clone, who’s embodied the anxious voices in her mind.

She sees the clone running at her full force, trying to physically kill her. (If you’ve ever had major anxiety, a lot of the time, that’s what it feels like.)

They duel it out, Matrix style, by flying around the room trying to attack each other, while smashing into thick glass windows.

Her clone violently shouts out all the things Tris tries to avoid hearing such as: no one will forgive you and no one loves you. (I might have added the love part in, but hey, it adds to my point).

Tris then stops fighting as she realizes she’s the only one who can accept her ego and says lovingly: “I will forgive you. I will love you.” The clone stops attacking her, the simulation dissolves, and she’s passed the test.

After watching this scene I collapsed into what looked like a hunched over tree that had been hit by a storm. I burst into inconsolable tears, while my little white, fluffy dog looked at me with his head tilted as if to say: “What’s wrong, girl?”

I thought about how all these years I’d been talking to myself like I was worthless. Every time I felt sadness or anxiety I berated myself further and emotionally smashed myself into the ground whenever I needed help.

I was the one who had turned anxiety into some sort of creepy horror movie character, when really all she was, was a version of me who just wanted to be heard and loved.

I decided that day to change anxiety’s name to “sweetheart.”

Sweetheart and I get along really well now, and she’s so much happier too. She now has a rosy complexion; long, shiny black hair; and beautiful, glowing skin.

When she feels worried, I tell her I am there for her, and she smiles. When she’s angry, I listen to what’s bothering her, and she relaxes.

The most important thing is I give her attention when she wants it, and she thanks me and happily skips away to wherever she goes instead of torturing me. (I am assuming my mind has a virtual Starbucks where she hangs out, and it now offers coconut milk.)

When you accept and love parts of yourself that you deem unacceptable, a strange thing happens. Those parts start working with you instead of against you.

I don’t really look at anxiety the same way anymore. I look at it as an unbelievably creative imagination. (UCI is the medical term I give it.)

If it’s used or channelled out of me through writing, I feel awesome, energized, and optimistic. If I don’t do anything with it, I catastrophize doom and gloom, feel exhausted, and see the worst in everything.

I believe having UCI is a sign showing me my life calling, which is a career in story telling through writing and public speaking. I would never have figured this out unless I paid attention to the voice in my head.

If you are currently struggling with UCI (aka anxiety), believe me, I understand how you feel and how dark things can get. But I also believe we are given certain traits or tests in life to teach us something and move us in a certain direction.

Rather than seeing UCI as something that needs to be removed, think about the gifts it brings to your life and choose to see it differently.

Now that I can see my anxiety as a gift, I know what I need to do to get back to inner peace, something I don’t think I’ve ever really been able to do.

So go forth my friends, find the sweetheart of your mind, and listen to what she wants to tell you. You may be surprised at how cool and wise she really is…

If that fails, watch Insurgent with your dog.