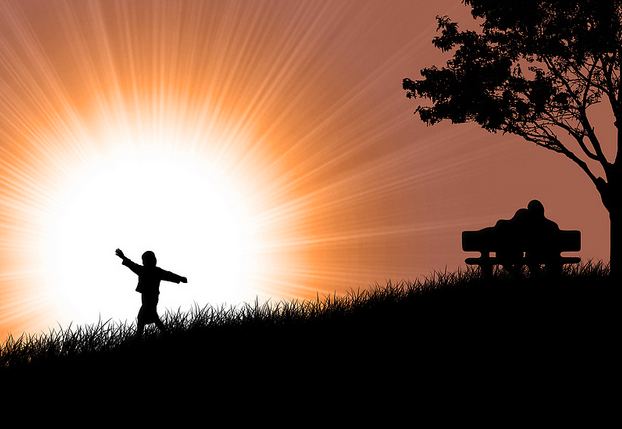 “Joy is what happens to us when we allow ourselves to recognize how good things really are.” ~Marianne Williamson

Our 12th floor apartment overlooks Cape Town’s city bowl and harbor. The view is such that even on overcast days I’m drawn to the window each morning to breathe it in.

There’s a sense of being both a part of the world and entirely removed from it when you’re that high up.

It’s how I move through my life too; I’m either immersed in it or off on my own. This contrary nature is not without its challenges, especially when I’m called upon to be one thing when I’m clearly feeling another.

It’s precisely these moments, however, where if I lean forward in spite of my reluctance, that growth occurs.

That’s what happened to me the other morning. I was at the window enjoying the view when I noticed a man lying on the narrow concrete island that separates the two lanes of the busy road below.

His appearance led me to believe he was down on his luck, most likely homeless. I watched as he tried to pull himself into a sitting position. After a few attempts, he eventually gave up and just lay down on his back.

Cape Town has its share of street people, a lot of them with obvious substance abuse issues. As a result, whenever I see someone lying on the ground, I immediately assume they’re passed out from drinking too much.

Watching this man below, I figured him for a drunk too. It’s not a judgment call; alcoholism is an illness like any other. I’m simply pointing out how quick I was to pigeonhole him, and from 12 stories up no less.

Ordinarily, I would simply have gone on with my day, but something compelled me to call the city’s emergency number and ask them to send help. I’m not sure why.

Maybe it was because the man was lying precariously close to a drop that would land him squarely in the face of oncoming traffic if he fell. I don’t know—all I can say is that, in this instance anyway, I couldn’t ignore the fact that a fellow human being needed help.

As I stood watching him, a battle brewed inside of me. I knew I should go down and check on him, but the thought of dealing with a drunk, smelly homeless person had me rooted to the spot.

I’m squeamish and particular; getting my hands dirty isn’t something I enjoy.

Everyone else obviously felt the same, because although he was clearly visible, nobody had stopped to help him. My mother came to mind; she wouldn’t have thought twice about going down to help this man.

The ambulance was still nowhere to be seen, so I eventually decided to head downstairs and see what sort of state he was in. I arrived to find someone obviously unwell, but also completely sober and clear-headed.

I sat down next to him and asked what was wrong. He told me he’d been sick all night, most likely as a result of something he’d eaten. He explained that being homeless meant he had to eat whatever he could find.

We introduced ourselves and made small talk while we waited for help to arrive. Contrary to what I’d expected, Theodore was well-spoken and easy to talk to.

He had moved to Cape Town from Johannesburg in search of a better life, only to lose his job when he fell ill. When I told him that I was also from Johannesburg, he smiled. Now at least we had something in common.

I learned that his mother and brother were both dead, although talking about his family brought tears to his eyes, so I dropped the subject. People stared as they drove past, but still nobody stopped.

Granted, we were an unlikely sight, the pair of us. A white woman in shorts and a vest and a black guy wearing a maize meal sack over his sweater sitting together in the middle of the street is not an everyday occurrence.

It was a hot morning, so I was relieved when the ambulance finally arrived. The paramedics helped Theodore climb inside and set about checking his vitals.

A combination of an overworked system and impatience on Theodore’s part resulted in him ending up back on the streets for a while. I eventually tracked him down again and arranged with a Homeless Assessment Centre just outside of town to collect him.

The last I heard he’d been back to hospital for a check-up and the Centre was in the process of finding him a place to stay. I’m obviously happy that I was able to help Theodore, but this experience was about so much more than that for me.

It taught me (again) that making assumptions is a foolish habit. It showed me how much I have to be grateful for, and it drove home the point that one person really can make a difference.

More importantly, however, I learned that gratitude is about more than giving thanks for a warm bed or the food in my fridge. It’s also the good feeling you get inside when you know you’ve done something worthwhile.

We never know when or how we’ll receive our lessons, but if we get out there and lean into every opportunity we can be certain not to miss them.

In this instance, I was fortunate enough to hear the tiny voice urging me out the door in spite of my reticence. Had I not, my assumptions would have remained just that.

Instead, a different story played out that morning.

All too often I worry about things that aren’t really that big of a deal, but then I’m presented with situations like these and I’m reminded of all the good in my life that I often don’t give credence to.

Angela Horn is a Cape Town-based freelance writer, minimalist lifestyle blogger and speaker. Feel free to stalk her on Twitter or harass her via email. Alternatively you can simply wander over to Mostly Mindful to find out more.

Hang Up the Superhero Cape: We Don’t Have to Do It All Alone

Start Your Day Right with the Magic Morning Mindset