Identity Crisis: When You Aren’t Sure Who You Are or How You Fit In
By Sabrina Bolin 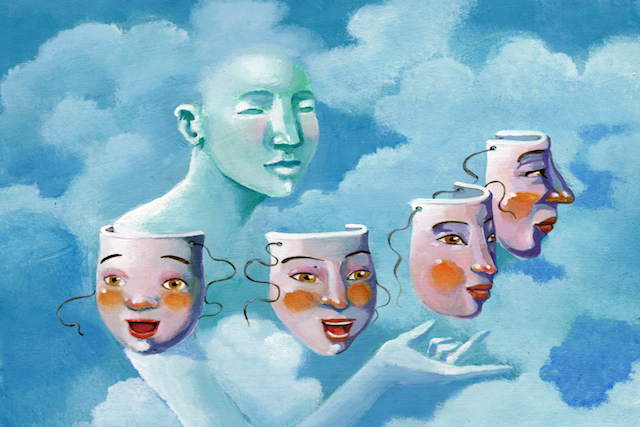 “Waking up to who you are requires letting go of who you imagine yourself to be.” ~Alan Watts

In another life, not too long ago, I was an actress.

I fell into acting when a catalogue showed up on my doorstep for UCLA Extension summer classes, and in my boredom I started flipping through it to see what was on offer. For whatever reason (synchronicity? my intuition?), the Acting 101 class jumped out at me, and something in me said yes.

At the time, I was living in West Los Angeles, only a few years out of college after graduating from Pepperdine with a degree in business; working in the travel industry; and quite frankly, not entirely sure how I really wanted to spend my life.

My identity as college grad with a business degree didn’t mesh well with this newly emerging identity as an actress, but that little “yes” that signed me up for the class quickly became a louder “yes” as I fell in love with acting.

Even though I was a performer at heart (dance was my medium of choice for thirteen years in my youth), acting was only something I did occasionally in a school play here and there. But this, Acting 101, this was something new.

This was my chance to become not just one aspect but all aspects of who I imagined myself to be, as I brought words to life, I embodied amazing roles, I hobnobbed with the stars…okay, that last bit might be stretching the truth. (As an “indie film” actress, most of my hobnobbing was with other talent from the independent film and local theatre scene.)

But no matter who I was hobnobbing with, I always found myself comparing and falling short—reaching for my new identity as a “successful actress.”

Not put together enough.

I remember thinking “if only” time and again; if only I were (fill in the blank), people would accept me, understand me, love me.

Life is hard when you don’t know who you are.

Or so I thought—until I met and fell in love with an actor who was actually doing those things I wanted to do, and yet still had many moments feeling as lost and disconnected as I did.

I began to awaken to the possibility that no one is immune to this identity crisis; even those who seem to have everything together question who they are and why they’re here.

This identity crisis, fueled with my desire to help others in a more direct way, set me off on my current journey as a healer and coach. I was seeking to understand who we are at a deeper level rather than try to simply “fit in.”

Yet even as a coach, I found myself holding tight to the role I played as my identity. I wanted to be like other coaches—successful coaches—and I wanted to look and feel the way they did, fit into the mold that was shaped for my occupation.

But the harder I tried, the more I realized that I didn’t fit in. Not because I was doing anything wrong but because the truth is, “fitting in” is an illusion.

We are more than just our personalities, our likes, and dislikes.

We’re more than our gifts, talents, and skills.

We’re more than what we do, and we’re most certainly more than our bank accounts (or lack thereof).

In truth, I believe our real identity actually brings us closer together rather than further apart, and it’s less about “fitting in” and more about truly connecting with one another.

I began to shift the story from lonely outsider to a small but very important part of the whole.

This changed not only how I felt, but also how I showed up in the world.

I began to ask the deeper questions—not who am I, but who are we? And more importantly, what are we, collectively, here for?

The answer that came through for me was so simple, yet so profound.

We seek love because we are love. That is our identity.

When we remember how alike we are at the core, it makes figuring out who we are on the surface simply a secondary gain.

You may be questioning who you are, why you’re here, and what your real identity is; after all, we all do.

Who you are is always evolving, so rather than get stuck turning inward to figure it out, I challenge you to shift your focus.

Just for today, try this:

How are we alike?

Maybe it’s as simple as the fact that you both read the same books. Or have the same views on an area of life. Or perhaps you both just love the color purple.

In that split second, think to yourself “I get you, because you’re like me.”

This thought, consciously chosen in that moment of connection, can powerfully change your perception of “who you are” in this world and ultimately transform your identity crisis to an identity awakening.

Sabrina Bolin is a compassionate guide whose mission in life is to be a vessel for love. She currently manifests that mission through MyMiBoSo, her coaching practice focused on bringing intuitive awareness to the mind and body in order to create joy in the soul.