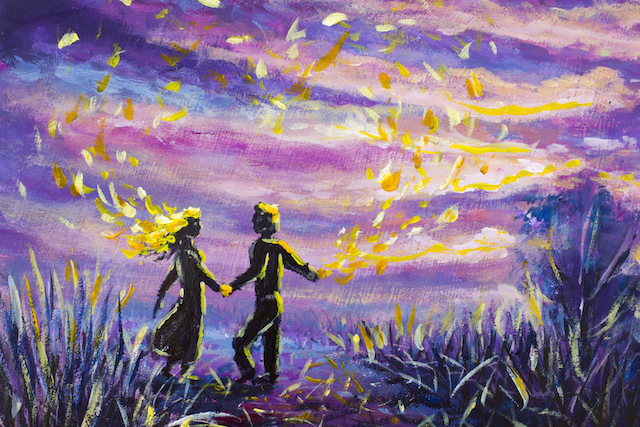 “Your problem is you’re too busy holding onto your unworthiness.” ~Ram Dass

Three years ago I went through a breakup with someone I loved deeply.

I had no idea what had happened to me after I fell in love with this girl. I now know that I was asleep from the beginning to the very end of the relationship.

I was totally encapsulated with this girl to the point where I could not see what was in front of me. I was unable to see the red flags that were there in the beginning.

When I first laid eyes on her, I felt a magnetic pull. I knew that she was it for me. I had her as the one before I had spoken a word to her. And what made it even harder was that when I was with her, it felt like home, as if I had known her before.

So, no matter what she said, I had it sealed in my mind that this had to work.

When it all started she was almost impossible to get a date with. She bailed on me three times. On the third time I was aggravated, and she knew it. We had to have a phone conversation about why we couldn’t go out.

This had never happened to me ever before, and the weird part was that I went along with it. I had the conversation and everything was fine and dandy when we went on a date just a few days later.

On the first date it was as if I had forgotten about the initial weirdness and aggravation. I was sucked in. But as weeks went by, I noticed that I was only able to see her once a month, even though she lived in the next town over from me.

We would have to resort to FaceTime, when she was just at home. I couldn’t pick her up at her house because she wanted me to avoid her parents. But at the same time, she had pictures of us on social media, so it wasn’t like our relationship was a secret. I was confused, but I kept on with it.

I remember my birthday came around and I didn’t get so much as a card. And it was sad because that didn’t dawn on me until I actually broke up with her. All I wanted from her was her time, and that was limited, and at her convenience.

I should also tell you that I was not the kind of guy that just harbors all my frustration and doesn’t talk about issues.

I would try to talk about my feelings and concerns, as well as try to understand her, but she would never want to hear it or talk about it. There was constant neglect.

What could I do? How could I show her that I loved her? What would make her open her heart to me? Take her to more dinners? Buy tickets to a game? None of that seemed to make a difference. But I felt for her and understood she had been cheated on previously, so I used the excuse that “she just has her walls up.”

I looked past her avoidant personality, the distance she needed, and the fact that we were in different chapters in our lives. I also was willing to set aside my needs to fulfill hers, and only hers. My self-worth was at an all time low. (Or had it always been that low?)

The poison in this toxic relationship set in early, and I decided that I would enjoy more of it until the point where I needed to leave. Let’s not forget the idea that men have to pursue, pursue, and pursue. Because anything worth having won’t come easily, right?

After she put me completely on her backburner in the relationship, I knew that I was worth more. I cut the poison chord and licked my wounds for a long time after.

But there is healing in the “licking of my wounds.” The healing was sparked by a curiosity that I had developed in the search for myself.

Why did I attract this type of person into my life? How could I move upward so that I could attract healthier relationships going forward?

I wasn’t going to just blame her and just get on with it. I didn’t want to be in denial about the fact that I had chosen to be with her. She was just being her, and how could I blame her for not being the person I wanted her to be? I needed to take some responsibility for my choice and work from there.

I found that amongst my own mommy issues, there was some childhood bully issues, and I’d been living with the “I’m not good enough” belief for years.

Suddenly, I was awakened.

I was awakened to the fact that the purpose of this relationship was to spawn a new discovery in my life, and that was the search for who I really am. It wasn’t just figuring out who I thought I was or being a better me, it was the search for my deeper self—my soul.

I believe this whole event was put forth for me to learn my worth.

Right after the relationship, I took time to grieve. That encompassed the generic reaction of drinking and going out, because at the time I didn’t immediately get the lesson; I was still working from the only place I knew.

But I realized that doing what the generation would consider normal—drinking, going out, and hooking up with other girls, just to run from the pain—wasn’t going to make anything better.

In the past it may have worked, because I wasn’t as emotionally invested and didn’t care as much when relationships ended. But this particular time was unique, because, at the time, I was looking for my soul mate.

This time around I had much higher expectations and a deeper attachment. That’s what had caused the pain from the start. I wasn’t hurting because she wasn’t the girl I wanted her to be; it was the expectation of what I thought she was rather than who she was in reality.

Had I been present and awake, I wouldn’t have dated her at all because I would have seen that she was the complete opposite of what I needed. But how do I know what I need? And do I feel that I deserve what I need? Am I worthy of it?

On a simple level one could say, well, of course you deserve it and of course you are worthy. But I realized that inside I didn’t feel that way.

I eventually realized that my upbringing wasn’t surrounded by much love, not in the way that I needed. I was taught tough love, meaning little acknowledgement and praise, and as a result I never felt good enough.

Since there was an absence of love in my childhood, I didn’t know that I was worthy of it.

This model that I had worked with since my childhood affected who and what I would eventually attract. I projected unworthiness, and thought that women who love, care, and are nurturing didn’t exist, basically setting forth what came into my life.

If you’ve had similar experiences, my message is to be present and be aware. This enables you to see the person you’re dating for who they are, as opposed to focusing on who you want them to be, and to see yourself more clearly as well.

This is an opportunity to not place blame in your relationship but rather to learn about yourself and your patterns.

Ask questions to help you dig deeper, such as: What is causing me to feel this way? Why was this event brought into my life? Where do I need healing? What issues, thoughts, or beliefs am I holding onto that are keeping me from where I want to go?

If you can just be present you will be able to notice your own thoughts and your attachments to stories in your own mind—stories about the past, the future, fear, control, unworthiness, and other issues that you may be holding onto.

Some questions I ask myself today when I’m meeting someone for the first time or seeing someone in the beginning include: Is this person my friend? How is their heart? Is it open?

Simply put, when I’m with that person, my heart is open to seeing who is there.

Do the work to heal your own wounds and to escape from your unhealthy patterns, and your heart will be open as well.

Brad’s life’s purpose is to be of service to people. He currently devotes time to working with Autistic kids. He’s working full time on his Masters Degree in Counseling Psychology, and in the future will be pursuing a PhD. He writes to share relatable stories to help with spiritual growth.

Conscious Choices We Need to Make to Attract Healthy Relationships