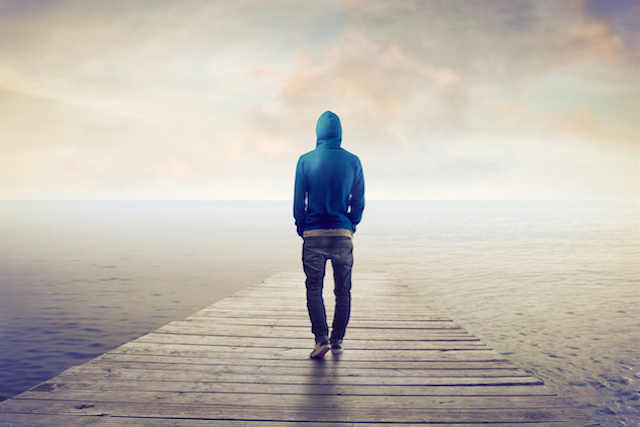 “Don’t let yesterday use up too much of today.” ~Cherokee Proverb

Age is a funny thing, isn’t it? It’s both an internal and external measurement by which many of us, consciously or not, judge our successes and failures, and it’s how others often judge us: “She’s so young to be CEO.” “He’s too old to be a quarterback now.” “Those guys should have stopped touring years ago.” “How old is that woman he’s dating?”

Measurement is part of our culture.

Paradoxically, we initially choose our life paths when we are the least prepared to understand the significance of our decisions.

It took me until I reached mid-life, while simultaneously hitting rock bottom, to finally change the course of my life and, most importantly, to learn how to let go of the “whys,” “what ifs,” and “if onlys” that had been my everyday mantras for as long as I could remember.

It’s not easy to put your past in perspective and ignore cultural measurements, and it can be unnerving to allow yourself the time and space to evolve. But from my experience, the mistakes, bad choices, and seemingly insurmountable challenges you may now be facing are truly fixable.

And once you decide you’re ready, you’ll find that it’s cathartic (and yes, a little frightening) to give yourself some time to find your true path, however you define that for yourself.

My path appeared on March 5, 2010. I was president of my family’s company. Except for a few years out of college when I thought I would be a musician, I had always worked in the business.

I knew very early on that joining the company was a mistake, but I had made a commitment to my father in my early twenties, worked my way up from intern to president, and had always done the “right thing.”

In 2010, the world was still recovering from the financial meltdown, and many companies’ sins and weaknesses were exposed. On that Friday morning in March I realized exactly how far down our company had fallen.

In the space of a few minutes, I discovered that people I trusted deeply had been lying to me for years, 300 employees could lose their jobs (including me), my savings were gone, and my house could go into foreclosure.

Everything I had worked for and bet my life—and future—on was collapsing around me. I closed the door to my office and cried.

But wait, it gets worse.

I soon found I could do very little other than sit in my office and watch TV, occasionally crying for no apparent reason. I only talked to the people I had to. Things I loved to do like playing the guitar or riding my motorcycle were of no interest.

Most days I closed the door to my office when I got there in the morning and opened the door nine hours later to go home. Some days, I didn’t even get out of bed.

Having so much time to think, I only focused on my failures (especially as I was desperate to save the company).

I obsessed about why I trusted so easily, where I thought I should have been by now, and why I made the choices I’d made. Regret, anger, fear, embarrassment, and blame encompassed my every moment.

For those of you who have never seen a commercial for antidepressants, these are the classic signs of depression, and I was deep in the abyss before I sought professional help.

Therapy was hugely valuable (and still is), but it was a conscious, meditative exercise an Eastern astrologer friend suggested several months later that gave me the freedom to breathe, gain clarity, and find the courage to change.

My friend told me to take a break, get on my Harley, and disappear for a few days (which was far more difficult than it seems). He said the problems would certainly be there when I returned. While riding he wanted me to practice what he called ‘the simplest state of awareness.’

This meant that any negative thoughts about anything—job, money, house, family, fear, failure, regret, crashing, etc.—were to be pushed away by focusing only on the simplest things around me such as the color of the sky, the smell of the flowers (or car exhaust), the sound of the motorcycle, a bird in flight, the weathered wood on a barn.

If anything negative entered my mind, I was to immediately replace that thought with a simple thought.

Oddly, I had always felt comfortable being unhappy, so to not allow anything negative in was against my nature back then.

But when I replaced a stressful thought with a basic observation about the world around me—an observation where there was no judgment—I started to understand what it meant to “clear your mind.”

This was not about focusing on what I wanted. When I tried to do that and skip the simplest state process, my mind always reverted to what “should” be. I wasn’t ready to start changing my life… yet.

So, what happened? Even in my depression I had enough sense and commitment to do whatever was necessary to fix the company, and after some drastic and painful changes it was slowly stabilizing, but in my heart I knew that it was time for me to leave the family business.

After convincing myself all my life that running the company was my destiny, I understood, and accepted, that it wasn’t. I resigned in February 2011.

My decision did not help my relationship with my father, and I was now left without a job, yet still a mortgage, bills, and a family to support. But for the first time in my life I felt aware. The resentment, shame, and paralyzing fear of change were fading.

I realized I needed to do what I loved and what I was good at—obvious, I know, but not at the time—which was being a creative entrepreneur and working with music in some way.

I started a full-service, strategic creative consulting agency; we work with companies, brands, and top-level artists helping them engage differently with their audiences so they achieve their goals and grow.

From the beginning we landed clients we never thought possible, considering we had no experience, and they’re all still happy today; our reputation has earned us more clients; I have more time to do things for me; apparently I “look” happier; and, financially, I am far better off now doing what I love to do than when I was doing what I had to do.

I also decided to go back to graduate school part-time, which I was prevented from doing years ago; I start in the spring.

The quote in the beginning says not to let yesterday take up too much of today, it doesn’t say “don’t ever look back.”

I believe that while never looking back is a noble goal, it’s very difficult for many people to do, especially me, without the kind of awareness that comes only from distance. So I chose a quote that, for me, was accessible, allowing me the space to safely pause and reflect, and then inspiring me to act when I was ready. You, too, will find the right words for you, if you haven’t already.

It took many years, a traumatic event, and depression for me to start my life over. And still it was difficult and I was afraid when I made that decision; change is scary regardless of it being “right.”

The simplest state exercise helped me gain clarity and perspective, and then time gave me the confidence and courage to act. And remember cultural measurement? I measure myself differently now, and I actively learn from people of all ages.

This is my story so far. I encourage you to find your inspiration and motivation to help you on your journey, and then perhaps you’ll share your story.

Most importantly, you need to know—not just believe—there is a right time for you to change, no matter how hard, no matter your age, no matter the obstacles. If you feel in your heart that you are not where you want to be, it is never too late. Be your own light; the universe will wait for you.

Brad doesn’t have a blog or a life-coaching website, although he has a lot of respect for those who do; but he does believe one needs to give to live, so he hopes that by sharing his experiences it will help others. Sometimes it’s just that simple.

Sometimes the Safe Path is Not the Right Path

What I Now Know After Feeling Miserable and Worthless at Work