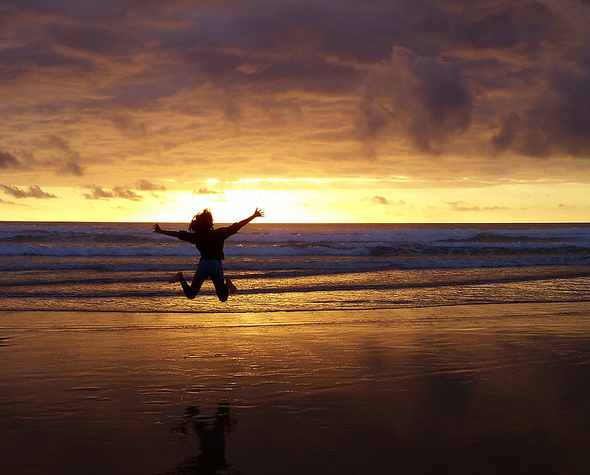 In March I realized my tax liability would be much larger than I’d anticipated, effectively depleting my entire savings account. The next month I had my first major surgery, something that terrified me and further burdened me financially.

Less than a month later, while my boyfriend was on a vacation I had to miss because I was recovering, a burglar broke into my apartment and stole everything of significant financial value that I owned.

One month later my grandmother passed away, surrounded by her closest family members. I’d missed the majority of the last decade of her life, but still, I was there.

Never before in my life had I experienced so much loss in one season. It was an overwhelming, emotionally challenging time.

And then, without really understanding my intentions, I tossed another loss onto the heap: I stopped writing every day for this blog, as I’d done previously for almost three years.

A part of me felt this urge to write about the same things over and over. So many times I started blog posts about how I felt uncertain, scared, lost, and sometimes, empty.

I’d write about my inner conflict over living 3,000 miles away from my family, with my boyfriend who’s from California, and how badly I wanted to move home after my grandmother’s death.

I’d write about how directionless I felt, with no desire to make any of the professional choices other bloggers often make—mentoring, coaching, or leading workshops.

I’d write about how ironic it was that so many people emailed me for advice about their lives, when in that moment in time, I had so little clarity about my own.

And then I’d stop. Three or four paragraphs in, I’d shut my computer, realizing I had no endings for those posts, and considering that maybe that was okay.

I was hesitant to believe that—or maybe, more accurately, allow it. I had wrapped my identity up into the idea of daily sharing. It wasn’t just what I did; it felt like who I was.

I was someone who regularly helped people, and this gave me a sense of meaning. The connection and, yes, the praise I received from my regular writing fueled me, motivated me, and in times of trouble, sustained me.

My presence here was the foundation of my life, with all else dancing around it.

Suddenly, I considered that maybe sharing insights every day was preventing me from gaining greater insight.

After nearly three years of mining lessons from my everyday experiences, I considered that maybe I needed to release my grip on my identity to allow myself to transform.

At first this was incredibly hard for me. Every day that went by without a post from me, I felt a sense of guilt and loss.

I thought I was failing you, the community, and I feared I was losing the connection, purpose, and fulfillment I’d enjoyed in abundance before.

I questioned why, after opening up so many times before, I’d shut down right when I had so many emotions and questions to explore.

But that was it, really. Somewhere inside me, I didn’t want to share it. I didn’t yet understand any of it. Instinctively, I just knew I needed time and space to explore it on my own.

So I did. Instead of writing as much as I previously had, I focused on working with other writers to help them share their stories—which was, in fact, my original intention when I started this site.

I put my heart into freelance fiction writing for ‘tween girls—something that’s fun and light, and yet equally fulfilling.

I spent time riding my bike at the beach, and I took an acting class.

I visited my family three more times to help with my sister’s wedding.

I took lots of bubble baths, and sat outside doing nothing, and allowed myself to do it all without trying too hard to find meaning and answers.

Instead, I leaned into the questions. I continued writing here, though far less frequently, but it was no longer the center of my life or identity.

It was part of who I was; in the other parts where that identity formerly extended, there was space waiting to be filled.

In time, I started to fill it. I wrote a comedy screenplay with my boyfriend. I worked on a collaborative book project, reinforcing my original intention to focus on community.

And I started planning for a life that would entail far more time with my family. It was that thing I always talked about doing someday—creating a bi-coastal lifestyle. I decided that someday was now.

In two weeks, my boyfriend and I are leaving LA to spend time with both of our families and work on new creative projects together.

I can’t say for certain I know where things are leading, but I know I’m excited for the possibilities.

After months of giving myself permission not to tie things up with a lesson, I now have a few that I feel compelled to share:

When everything falls apart, it’s an opportunity to look within and ascertain how you want to put it back together.

It’s tempting to get caught up in regrets and what ifs, all the things you think should have done to avoid the changes that have shaken you. But sometimes being shaken to the core is a reminder to connect with it—to look within, reprioritize, and move forward with a stronger commitment to honor the things that matter to you.

It’s okay to not know where you’re going.

For some people, direction is a vision, a plan, an exact idea of where they want to go and how. I admire those people, but I’m not one of them. Rarely in my life have I known exactly what would fulfill me in the future.

I’ve learned that that’s okay. As long as we lean into each moment and listen to our intuition, we will eventually discover the next steps that feel right for us.

It’s only in letting go of who you are that you have an opportunity to discover who you can become.

It will never feel safe to shed a role that provides a sense of identity, meaning, and fulfillment. Oftentimes, there’s no reason to do it. But sometimes, we know deep inside there’s something else waiting for us. We just need to be courageous enough to create a little space to discover what it is.

I will always write for Tiny Buddha as I am able and inspired. But I now realize that it’s okay to change, grow, and try new things. In fact, it’s imperative.

Things rarely stay the same in life. When we force ourselves to do that, we feel limited, conflicted, and stuck. The key to freedom is allowing ourselves to crack open and evolve.

As a side note: I recently realized a ton of emails have gone into my spam folder, many from the contact form—and prior to this past month, I didn’t check that regularly. If you emailed me and never received a response, please accept my apology! I now check that folder daily to ensure I receive every email that comes to me.