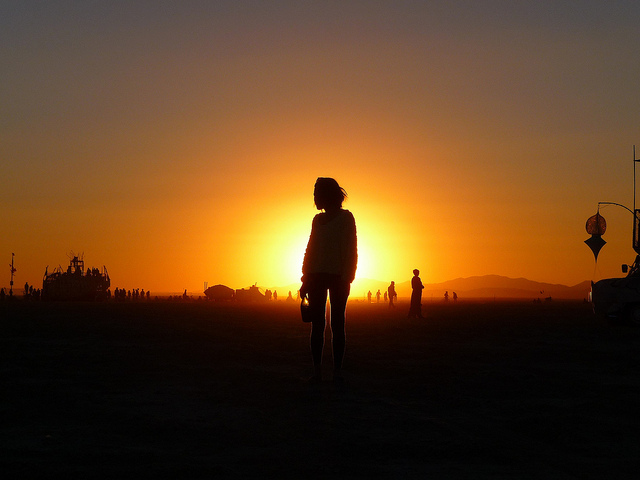 TRIGGER WARNING: This post deals with an account of sexual abuse and may be triggering to some people.

“I now see how owning our story and loving ourselves through that process is the bravest thing that we will ever do.” ~BrenéBrown

I was happiest when I didn’t know my weight, and that was ironically when I was at my heaviest, which was in high school.

I was slow to take on the self-loathing and body image issues that plague so many young kids. I rarely felt bad about myself, partly because I had a loving family and a boyfriend who constantly told me how pretty I was.

The boyfriend and I parted ways when I started college, and, thrust into a different world, I realized that I was fat. Before I knew it, I began absorbing what magazines suggest the ideal woman should look like.

I tried changing my body, forcing it to do things I hated because I hated myself. Eating too much one day and eating too little the next was the answer to my fat problem, and exercising through the form of dogged running was the punishment for being “bad.”

One year and two months from writing this, I was sexually assaulted. The situation fell into the “blurred lines” category. He bought me a drink and many more to follow, until I saw double, until I couldn’t stand anymore and fell tumbling onto the cobblestone ground of that foreign, lonely country.

He didn’t need any drugs, all he had to do was talk smoothly like the snake he was, knowing that all it would take was a few drinks for someone of my size to lose her judgment; he knew me better than I knew myself.

It took me a few days to register what had actually happened. He had gone far enough that I felt violated, used, and disgusted with myself, where looking and touching my own body felt dirty, but not far enough that I needed to go to the hospital take a pill.

That night, as I moved in and out of alcohol poisoning-consciousness, in a moment of sanity I found my wits and told him to get out. He left peacefully, as though he was a good guy, but there was already enough damage done. I was never suicidal, but I was as close as I’d ever been to those kinds of thoughts.

Returning to my family for much needed rehabilitation, I sought therapy and friends. It helped, but it didn’t heal. That’s because the love and support I was getting only worked as a Band-Aid. The trauma would never go away until I decided to kick it out of my home. And I tried. I really did try. But I was just too tired, too weak.

One day a friend told me that maybe in order to kick trauma out, I needed to feel stronger, like I truly owned the place; what would make me feel like the master of the house again? Knowing how to defend myself. Knowing how to fight. Not being afraid of it.

Perhaps knowing how to throw a punch wouldn’t have made a difference in last year’s situation; however, the experience instilled in me a fear of assault that was ten times stronger than it had been, simply because I knew what the aftermath of such an experience was like, and was so scared of it ever happening again that I became fixated on that one fear.

That’s when I decided that even if I couldn’t fix the past, even if it had nothing to do with my physical strength, I needed to address the fear. I needed to take my life back and do something for myself. I knew I deserved that.

I started taking Krav Maga, a form of Israeli combat defense. At first all I wanted was the guilt of the past to go away, with the knowledge that in the future I would never again be caught off guard, mentally or physically. That’s all I was asking: emotional and physical security.

What I didn’t expect was that one self-defense class would turn into hours at the gym taking kickboxing and partaking in Brazilian Jiu-Jitsu, getting bruised from head to toe, which sounds like a beating, but I assure you it was a worthy one. I had never felt more alive or stronger in my life.

As I began to witness what my body could do, this new form of “exercise” became the detox for last year’s trauma. When I was knocked to the ground, instead of dwelling on my failure, I got right back up to continue the fight, because I owed it to my body.

It wasn’t about my weight; it was about doing something positive for myself.

Allowing myself to learn how to throw a hefty punch and be confident in my ability to do so not only made me feel good, it made me feel loved. For the first time in a long time, I loved myself. I learned how to be my own cheerleader, and not the little devil telling me that I can’t.

I believe that giving yourself what you deserve and praising yourself can help you learn to love yourself; just getting there can be a little hard.

I needed to reach a point where I threw aside my worth before I could choose to give my body and mind what they deserved, instead of letting them rot away in sorrow. I just never expected that this choice would not only heal last year’s pain, but also lead me to self-love.

So I want everyone and anyone who has experienced something negative in their lives—no, I want people with all experiences—to sit down and think about what you need and what you’re going to do about it.

Does that include taking time out for yoga? Trying out for a spot on SNL? It doesn’t matter. Take that idea, do it, but most importantly of all, be your own cheerleader. Love yourself. Know that you deserve it.

Today when I look in the mirror and see a little muffin top, instead of spiraling into the abyss of negative thoughts and misery, I try to think of all the good things I do for myself and others. I think about how hard I sweat that morning, how much I read and learned that afternoon, and how the curry I cooked up made my family so happy.

Miss Muffin Top is not the enemy; she’s a part of me, and should not be the scale for how much I’m allowed to honor my existence.

Part-time avid haggling traveler, part-time bedridden homebody with laptop on belly and Costco-sized nutella on chest, Ms. Le is a Jill-of-all-trades, language enthusiast, and a rather uncommitted college graduate (she still can’t believe she made it out alive). Visit her at milotheory.wordpress.com.