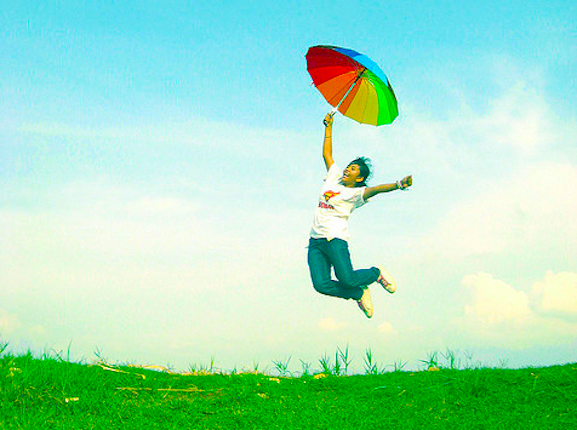 That crazed Loony Tunes cartoon character spinning out of control, crashing into everything in his path? Arriving in a blur. Leaving chaos in its wake.

That was pretty much me and my approach to “living my passion.”

This is hard to write but here goes (deep breath)…

Not too long ago I was seriously trying to accomplish all of these things at the same time:

The idea was that my brilliant plan would eventually pay off and sustain my family completely so that I could:

So how did that all work out, you might ask. Total disaster. Here’s a glimpse into my crazy Tazmanian lifestyle:

I would commute to my day gig and write blog posts while standing up on crowded subway cars. I’d come home and have a quick dinner, hang out with the children, and pretend to listen as they would excitedly recount their day. But I wasn’t really present. Then I would dash off after their bedtime to my studio man cave to work on my music until the wee hours.

Then I would collapse into bed every night, only to get up a few hours later and do it all over again. At the end of my self-imposed exile of several months, I would finally return home victorious, the proud father of a shiny new CD.

But there was no applause in my household. Only a very chilly reception from an ever more distant wife who understood my passion but couldn’t accept its all-consuming nature or my many frazzled creative endeavors.

Then I would spend the next few months trying to stitch back together our relationship. But the chasm between us was growing and heading to the point of no return, having repeated this scenario at least three times before since we had known each other.

I knew something needed to change, and quickly, if I was going to try and stay married.

Simply put, I became a casualty of the Digital Revolution. A world where faster is better, multi-tasking is the national anthem, and technology will set you free to be more productive and make you more intelligent.

Where you don’t need human interaction anymore. You can simply “connect” to your global audience, which was almost as good as being there with them.

Except that it’s not.

I was duped into believing that I could accomplish so many more tasks with all this technology and achieve incredible feats by simply sitting in front of a computer screen.

I was also following several successful bloggers and online marketers and learning everything I could from them. But this only amplified the delusion that I could accomplish all these things at once because they had done it.

Only all those marketers seemed very focused on just one thing and they were doing it really well. The problem for me was that I had many irons in many different fires and none of them were getting very hot.

I call this The Flailing Effect.

But thank God (or Buddha as it were) that somewhere in the midst of all this chaos I began practicing meditation. You could say I finally caught my breath. I quickly began to slow down and see a different perspective.

It didn’t happen overnight. There were no tectonic shifts in my crazy lifestyle. In fact, I had to get up even earlier to now fit my meditation into my already insane schedule.

But it was the best thing I ever could have done.

Slowly, through the practice of quieting my mind, I began to find clarity.

I clearly saw my attachment to this desperate need to accomplish something important in this life and be recognized by the world for it; and how these external accomplishments would somehow validate me as a person, as though who I was already wasn’t enough.

It didn’t take long before I recognized the insanity in my ways.

It became clear that I really needed to define what I wanted my life to stand for. Then I needed to eliminate everything else that didn’t serve that end.

But the most important discovery was learning to finally let go of all expectations that any of these aspirations needed to come true. Or if they were meant to be, I needed to stop worrying about when they were going to happen, which it turns out was a huge source of frustration.

Attachment, worry, frustration—these things don’t exist in nature. Things unfold as they are supposed to in nature.

A river runs its course based on the lay of the land. When it meets an obstacle, it doesn’t fight with it. It simply goes around it…eventually.

How long it takes is of little consequence. After some six million years or so, it might carve something as magnificent as the Grand Canyon. Nobody’s watching the clock in nature.

A tree is happy wherever it grows. It doesn’t secretly wish to sprout legs and run off to some other more happening part of the forest. (Robert Frost wrote a pretty great poem on this subject.)

In Buddhism, they call this patient acceptance.

Life happens in spite of your wishes. This is the nature of all things. When I began to accept this, my frustrations started to melt away.

When you can see yourself as a part of that nature, not separate from it, and start behaving as nature does, you will become more peaceful.

The day to day. Nothing else matters, except my family. When I’m with my kids or my wife now, I try to really be present, to enjoy the now in each moment.

When I finish a post or a song after many hours of editing and polishing it to a fine shine, I can stand back and smile. Another child is born. Then I put it out into the world.

I do wish for it a happy, prosperous life as any father would. I just don’t worry so much any more about how it all turns out.

It all turns out fine.