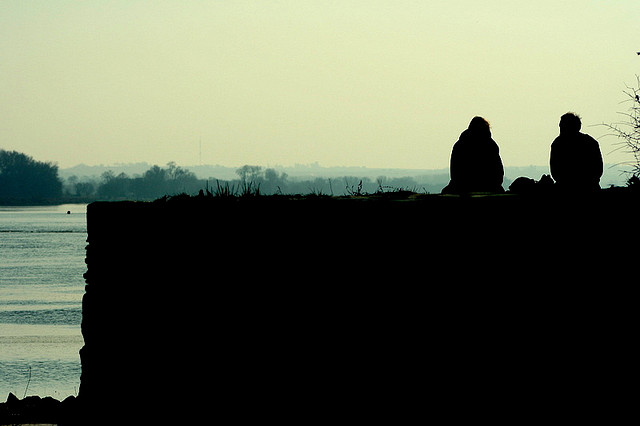 “Stay away from what might have been and look at what will be.” ~Marsha Petrie Sue

In my mere thirty years on this planet, I have had lots of boyfriends. Lots—hundreds. First one: Pat McGovern, first grade. We were in different classrooms, but we each took a casual stroll to the bathrooms at the same time. He leaned his three-foot-two body against the pink tiled wall and waited for me to walk by.

Then, just at the perfect moment, he told me I looked smashing. (It was picture day, so I was slinging the old A game.) This was the first of many cheesy pick-up lines thrown at me from men leaning against walls, and I ate it up like Haagen-Dazs.

Days later we were kissing under the slide at recess. That was my dating heyday, when relationships were easy. First: attraction. Then: coloring. Then: birthday parties, moms getting friendly on field trips, maybe some conversation about how the Stegosaurus was a vegetarian. And then: onto the next.

And what happens to all those men busting out of your relationship box? They’re all still out there. And they’ve moved on. And they have wives and kids and they are much, much happier without your constant requests for compromise or time alone to write blog entries. (Yes, I’m using the universal “you,” but this is obviously all about me, my friend.)

There’s always been some selfish part of me that has wished those exes wouldn’t move on.

I’ve caught myself hoping they would freeze in Ex-land, waiting for me just in case I’d made an awful mistake by ending things.

In the past, I’ve heard about an ex getting married or having four kids, and I’ve cringed and perhaps had a snifter of wine, thinking “What if that was supposed to be me?”

I could have a house and kids by now. I could be “settled” into a comfortable life right now. What was I thinking? What if I made a mistake?

It’s interesting to note that the act of settling down has the word “settle” in it.

I recently had my astrological chart read, and the kind astrologer told me I need to “grow up and throw out my idealism.” She also told me I need to dress in a more mature fashion. She acted like it’s not cool to wear stained sweats all the time.

I get that there isn’t a man out there who is perfect. You can stop reminding me. Mom, I get it. Many people encourage me to settle, and that’s very thoughtful of them. But it’s not like I’m going around saying, “Oh, Lord, that guy eats oatmeal with his left hand. The horror! Get him out of here at once!”

It’s more about how he wears his jeans or what brand of knives he uses. No! Not that either. Seriously, it all comes down to his credit score. No, not that either.

What’s going on is that I’m learning valuable lessons from each man about what I want in a relationship and how I want to show up in one. Each experience is making me better for the final taker.

The other day I saw a picture of my 2006 live-in boyfriend. We had been on the road to Serious Town not that long ago, and now he’s smiling in a Facebook photo with his mom (who I loved), his wife, and his new baby boy.

This time, instead of feeling that well-known anxiety, all I felt was relief. The relief of one millions sighs, so happy that it wasn’t me in that picture. I learned a lot in that relationship (including that I don’t want my partner to talk on the phone during the entirety of my grandmother’s funeral), and I’m confident that it’s not supposed to be me in that picture.

It feels weird to be imagining a future together one year and then well-wishing a few years later, but that’s exactly how it’s supposed to be. And I’m exactly where I’m supposed to be. We all are.

Laurenne Sala leads writing therapy workshops and speaks about vulnerability. You can find her at laurennesalabooks.com or through her show at tabootales.org. Her first picture book is out in March: YouMadeMeAMother.com You can also see juicy anonymous secrets on Instagram at @TabooTales. She thinks parrots are gay pigeons.

What We Need to Do Before We Can Have Happy, Loving Relationships