Lessons on the Trapeze: the Art of Making Things Happen
By Sonya Derian 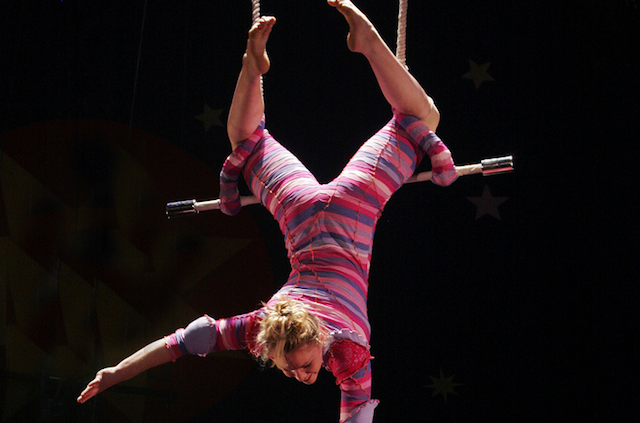 A couple months ago, when I was almost done producing a teleseminar and spending way too much time hunched over at the computer, I decided to do something different. Something that would bring me joy, that would get take me out of my normal environment and actually excite me.

So, I did what had been on my list to do for a long time: I went flying.

I didn’t know what to expect making the forty-five minute trek out to the Sonoma County hills to fly on a trapeze. I just knew I had been wanting to do it for a while and it was closer than then the outfit I’d been considering in Texas (which was also outdoors).

I also knew I had to go because just the thought of flying through the trees excited me more than anything I had done in a really long time.

I made the trek by myself because no one wanted to join me and I figured why wait? I was greeted by, what I learned, was a core group of women who met there every weekend.

One of the women who was in her seventies comes as often as she can. She was flying through the sky doing twists without a harness. (She got her pilot’s license in her sixties, which gives you a clue about her!)

Another woman was a single mom who came with her son every weekend and made this her retreat.

Marek, the owner or Trapeze Pro explained the rules of flying:

“Smile and listen. Those are the only two rules you need to follow to excel at the trapeze.”

I kept waiting to hear more. Smile and listen? That’s it? How do those apply?

But when I was on the trapeze, it was interesting how those two commands helped me glide through the air. When I listened and took action just when they told me to, grace would take over and my move through the air would be effortless.

When I was driving home, I realized how these two commands also apply to life.

The purpose of the smile command is to let go of resistance.

When you’re taking on anything new where fear can creep in, like flying on a trapeze, you have to find a way to tell your fear that you are okay, that this is okay. That you’re going to be fine. To smile is a decision, and in making this deliberate decision, you’re setting the tone of your own experience.

This reminds me of a wise teacher I once had. Whenever I’d complain about something I had to do but didn’t want to, she would tell me: Change your mind.

Decide you want to do it. Decide there is something in it for you. Decide that you are going to have a good time doing it. And invariably, I would—but it put me, not my circumstances, in charge of that decision. I think the same concept goes for the smile.

The listen command was more interesting. Darrel, a part of the team that was holding the ropes on the ground, was watching us fly and timing our actions.

We were supposed to listen for his cue to bring our legs over the bar because from his vantage point, he knew the precise moment when the wind would be at my back and grace would take over.

Outside of the trapeze world, this listen command is relevant because our intuition—our higher guidance, the universe, whatever you want to call it—has a similar vantage point.

It’s at ground control wanting to assist us in our forward momentum. It knows what we want and the quickest route to get there. We get the hunches, we get the cues, we get the nudges, but how often do we follow them?

When Darrel was giving me instruction from below, I kept questioning him.

And I’d repeat, “Swing my legs back and forth? How do I do that?”

When I finally made it through (it was my first time) and safely landed on the net, he came up from under me and said, jokingly, “It wasn’t supposed to be a debate, Sonya.”

But isn’t this what we do with our own guidance? We debate it to death, rationalize all the reasons why it’s not sound advice, and then avoid taking action.

With trapeze, the command is not listen as in enjoy the music. It’s listen and take action. Follow my lead and you will succeed.

If you think about it, these two commands are pretty good barometers of success off of the trapeze. People who have mastered their fears, let go of their resistance, and allowed grace to assist them by following their own internal cues are leading very successful lives.

Smile and Listen. Let go of resistance so that you can hear your internal guidance and follow its lead. Let grace take over and the wind be at your back.

In other words, you’re looking for forward momentum. Like flying.

Will You Get Bitter or Better?