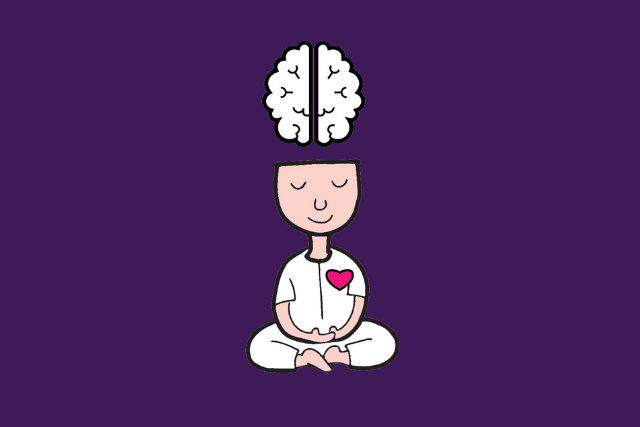 “You will never be free until you free yourself from the prison of your own false thoughts.” ~Philip Arnold

Every meditator knows the dilemma of trying to find that perfectly quiet place to meditate, where silence is the golden rule and voices hush to a whisper.

Oh how perfect our meditation would be if only everyone would be quiet.

As wonderful as it sounds, we know it just doesn’t always work out that way.

And that’s what made this particular meditation experience so insightful. It gave me an opportunity to see how my judgmental thoughts can make life far more painful.

The setting was a camping trip in Northern California. Even though I was in this beautiful place and it’s generally quite peaceful, not everyone was there to commune with nature.

On the day in question, I was heading back to my campsite after taking a leisurely stroll with my dog. I was relaxed and content as I started preparing for my afternoon meditation.

Before any sitting I start with some stretching. I don’t know if it’s old age or just tight hips, but I cannot sit without some movement first.

So as I was preparing my body to sit, my neighbors were preparing for a party.

I could hear the preparations going on but didn’t give it much thought—that is, until I heard the music.

I am a fan under most circumstances, but not at full volume and definitely not when I’m about to meditate.

So in came the thoughts…

How can I meditate with such loud music?

What kind of horrible person would do this?

The whole park should be quiet right now—I need to meditate!!!

My initial thought was to forget about my afternoon sitting, as there was no way I was going to be able to meditate through this.

So, instead of meditating, I just sat there, becoming more irritated and frustrated over the loudness of the music, my anger toward my neighbors increasing.

At this point I was painting them as serial killers who should be arrested for being so inconsiderate. I imagined all the things I would say to them and how I would get the park ranger to shut this clearly unlawful gathering down.

Because doesn’t everyone know this is the hour we meditate? Everyone should be quiet!

The noise that was coming from the music was nothing in comparison to the noise in my head.

By this time I was furious.

After mentally torturing myself for about thirty minutes, having my neighbors arrested and convicted multiple times, I finally had a flash of mindfulness and asked myself, what’s really bothering me?

Is it the music?

Is it my neighbors?

Or is it the story I’m telling myself about why they shouldn’t be playing the music?

The music, in fact, was not painful; as I said, I like Led Zeppelin.

And my neighbors, whom I had met earlier in the day, did seem like very nice people—highly unlikely there were any dead bodies lying in their trunk.

What was upsetting me was the story of why they shouldn’t be playing the music and how this made me a victim.

So I decided at that moment I would meditate, but I would also be on guard for what the real disturbance was. Not the music, not my neighbors, but the story of why they shouldn’t be playing the music.

Because I was so prepared for the disturbing thoughts, the moment they started to arise, the moment those first few words would creep out: “But they shouldn’t…” “How inconsiderate…” “Why does it…” I dropped them like a hot potato.

The link between the thoughts and the pain was crystal clear; their seductive power crippled. And as long as I didn’t give the story any fuel it couldn’t sustain itself, so there was nothing to bother me.

As I sat my concentration got deeper, even as the music blared on.

When the meditation was over I could hardly believe what had happened.

I finally understood this teaching I had heard thousands of times: It’s not the situation but what I’m telling myself that’s causing me to be unhappy.

But why did it have to take so long?

Our thoughts have enormous power over us, and we tend to underestimate just how much control they really have. How sneaky and insidious they are, how they sweep in and take over before we even know what’s happened.

At that point it’s too late; we’re so justified in our anger, our rightness, our pain that we can’t let the thoughts go.

As I reflected on the music, the meditation, and what I could learn from it, I realized what made it so much easier was that I was on the lookout for the thoughts.

I was expecting them.

So I started making a list of other recurring thoughts that disturbed me. The same thoughts I had been rehashing my whole life, allowing them to sneak in and steal my happiness over and over again.

That’s when I came up with my Top 10 Playlist.

My Top 10 most recurring thoughts that just drove me nuts and had no benefit.

After writing them out and staring at them in black and white I recognized my theme immediately. It was aversion.

We all have two main modes of thinking (everything else is a subtext of these two modes). They are wanting/chasing/desire and aversion/not wanting/resisting. We all spend time in both modes, but often we have a preference for one over the other.

I wish I hadn’t said that.

I don’t want to be disturbed.

I don’t want to go to this event.

How many times had I walked away from a conversation and immediately replayed it in my head, to find that one thing I shouldn’t have said? Nothing mean or unkind—just that I would agonize over that one stupid sentence, imagining the other person thinking about me disparagingly because of one measly sentence! Meanwhile, the other person was probably agonizing over the one silly thing they said!

Or maybe I’d want to be alone and then spend hours disturbing myself (while I was alone) with the thought of not wanting to be disturbed.

Or I’d dread some upcoming event, spending hours torturing myself ahead of time, only to say afterward, “That really wasn’t so bad.”

Now that these were added to my Top 10 Playlist, I was on the lookout.

Just like in the meditation, every time I started to see the familiar thought wanting to arise—“I wish I hadn’t said that,” “What if someone disturbs me,” “I really don’t want to go”—I would say to myself, “Oh that’s a Top 10,” and drop it right away.

To be clear, I wasn’t suppressing any thoughts; that’s a bad and ineffective strategy.

I dropped them because I had done the work already. I looked at these thoughts on paper in the light of day, and I couldn’t deny the pattern.

I knew how long I had been dragging them around with me—my whole life. But what I also knew was that the thoughts were making me unhappy—not the other person, not the situation, not the upcoming event. ME! I was the one causing the pain by always being ready to fuel the story.

When I’m asked, “How do you let go of negative thoughts,” my answer is always the same: it’s easy to drop them when you see the pain those thoughts are causing you.

And that’s the problem: We don’t see the pain, or at least we don’t see that we are the ones causing the pain.

Once we are caught up in a thought-stream, once we’ve created the story where we are once again the victim in this tragedy of our life, it’s too late. So we stay with the thoughts and the pain until we exhaust ourselves and then repeat.

Keep in mind I’m referring to situations where we haven’t actually been victimized—when life may seem annoying or even unfair, but no one has literally violated us.

That’s why creating my Top 10 Playlist was such a game changer. It helped immensely to see them all written down and reflect on how many times I’d been caught in these stories, how many endless hours I’d tortured myself, and nothing ever changed.

But something did change. I brought them to the surface, I wrote them down, and there is enormous power in that exercise.

For the first few weeks I would look at my list daily, typically before I would meditate and right after. This was when my mind was the most clear, and allowed a great deal of separation between me and the thoughts, because there was no emotion tied to the thought.

As each day went by I felt more and more space and peace in my mind. Nothing changed, except that I wasn’t thinking these thoughts anymore. These thoughts that had tormented me for as long as I can remember.

If I was alone and someone did interrupt me, it really did only last a few minutes because there was no story around it.

As soon as my mind wanted to start replaying a conversation I just had, I’d drop it. I knew the pattern; I knew where the thought would take me.

For every recurring thought on my Top 10 Playlist, I was prepared. They didn’t have the same emotional trapdoor they had before because I was expecting them.

Are We Really Free?

A prisoner isn’t free to choose even the simplest of things—to go outside, to look at the sky, the trees, the birds, the flowers, to feel the warmth of the sun or the breeze of the wind.

But how free are we when we go about our days not seeing the world around us? Not appreciating even the simplest of things, not because they are not there but because we are always lost in our thoughts: worrying, fretting, constantly rehashing, and replanning our lives.

We stay in this prison because we think we don’t have the keys.

Do this exercise for one reason and one reason only—to free yourself. Step outside and see for yourself how much more beautiful life is when we experience it without a story.