What If We Listened and Opened Our Minds Instead of Shouting and Judging?
By Joshua Kauffman 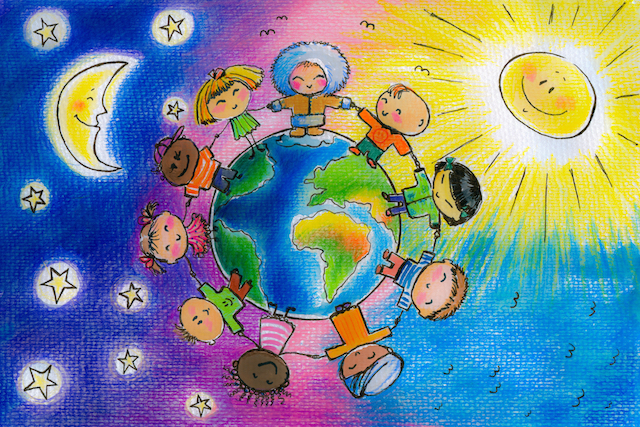 “If you can laugh with somebody and relate to somebody, it becomes harder to dehumanize them. I think that most of what we are constantly bombarded with in terms of media leads you to a creation of ‘the Other’ and a dehumanization of ‘the Other,’ and it’s very much an us-versus-them conversation.” ~Jehane Noujaim

People are really hard to hate up close.

In today’s acrimonious political climate, whole groups of people seem to be pitted against one another based on various political, ideological, class, geographic and racial classifications. And yet, spend a day with “the other” and it’s difficult to resist the gravitational forces of our shared humanity that make those walls come a’ tumbling down.

New York State, like many others, has a wonderful tradition of civilian run elections. Each polling precinct is manned by four election inspectors—two Democrats and two Republicans.

From 5:30am to 9:00pm—other than the two thirty-minute breaks to which each inspector is entitled—these four individuals spend every moment together sharing responsibility over the most minute of tasks, from opening packets of ballots to recording the serial number of the dozen or so seals on various documents and pieces of equipment.

Once the polls are closed, vote tallies recorded and everything securely stowed, usually round 9:30pm, everyone goes home. It’s a long day.

For these sixteen hours of work, all inspectors are earn $225, or around $14 per hour—not bad, but well below the earning potential of most of the inspectors. Many of the inspectors are “old-timers” who have been doing this three or four times a year (in addition to the big November elections, there are primary elections and other local referendums) for many years.

Last year, sort of in between jobs and living in the United States for the first time in many years, I decided to become an election inspector.

Far removed from America’s increasingly bitter political divide, I was a little bit apprehensive about what to expect or how this was all going to work so harmoniously. After all, the America I left after graduating from college was one in which people from all segments of our political spectrum—which compared to other countries’ is surprisingly narrow—could have a discussion without being branded white supremacists, snowflakes, fascists, or traitors.

Once upon a time in the quaint old days less than twenty years ago, political talk was sometimes pleasant and not always so insufferable and divisive.

Like all others, my polling station had three other inspectors. One of the other inspectors turned out to be the father of a girl I’d grown up with from our Hebrew school days but had not seen in nearly twenty years, once a close family friend.

Another was a retired school administrator, an Irish guy who had grown up in the Bronx and slowly migrated ten miles or so north to Westchester County over the course of his life.

Finally, there was an African American lady who had been born, raised, and was still living in Mount Vernon, a nearby city perhaps most notable as the sometime home of Malcolm X.

As the hours passed and different members of the team shared the various responsibilities and each took his or her break time, everyone found themselves getting to know the others one by one.

With the one guy whose daughter I used to know, reconnecting was fun, and nothing seemed to have changed other than that we were all older.

The Irish guy shared my love and knowledge of the local waterways (I’m a sailor and he’s a diver). He was a Republican who didn’t vote for and viscerally disliked President Trump; he was more of a John McCain or Nelson Rockefeller kind of guy who felt Trump was an abomination to his lifelong political affiliation.

The African-American lady was a Democrat who, judging by her apparent age, may very well have remembered or even met Malcolm X during the tumultuous Civil Rights Era, didn’t like Trump either but also didn’t understand the current white supremacy scare. She remembered a lot worse racial tension and fear in her lifetime and thought that all the recent talk was based in reality but overblown.

During the slow portions of those sixteen hours, even when politics came up, nobody raised their voices nor found anything to get angry about. Politics was sprinkled around more immediately pressing topics like family, local community developments, and lunch.

And, where there were disagreements, after talking it all out with the copious amount of time that we had on our hands, it became clear that there was a strong foundation of shared values—respect for individual freedoms, belief in racial equality, etc.—on top of which the (relatively minor) disagreements were built. There was much more in common than there was different.

You would never know it from reading the headlines, but this observation is actually reflective of society at large, as political science studies and public opinion polls over the years have consistently shown a clustering of public sentiment on most major issues toward the center.

And yet, the loudest and most extreme voices seem to be the one that dominate the debate. Controversies erupt over smaller and smaller issues, such as symbols of past oppression as actual oppression becomes less prevalent.

It’s not that today’s issues are trivial—you would certainly be concerned if you were a gender non-conforming person being forced into using a bathroom based on your biological sex or an African American who had to pass by a statue of Jefferson Davis every day on your way to work—but that the final 10 percent of every issue, namely the public policy prescription for how to “solve” it, is nowadays typically built on top of an agreement over 90 percent of the multiple facets and relevant fundamental questions involved.

Only the most extreme fringe elements of society support institutionalized discrimination, secession from the nation, limitation of basic rights, etc. In most instances, the disagreement is over the “how to get there” as opposed to the “where we are going” or “who we are.”

More importantly, whatever people’s political beliefs, it is exceedingly rare to find people today who are consciously bigoted. He might think men are men and women are women like in the good old days, but faced with an actual person—maybe his son or nephew—undergoing a struggle with gender, those fixed opinions usually soften.

She might not get her sister-in-law’s “churchiness” but nevertheless appreciate the values it seems to instill.

These prejudices are borne from ignorance and isolation, not hate.

Moreover, even among people affiliated with bigoted or extreme views or organizations, it is my firm belief that what is at work is more an unfortunate facet of group psychology: it is easy to hate a distant group, a faceless enemy, or a caricature of a supposed threat.

It is even easier when riled up by a group of like-minded people, an all-too-common phenomenon as America self-segregates by class, culture, and geography.

And, to pour gasoline on top of this whole incendiary situation, it is still easier when these types of conflicts sell papers and generate clicks, especially within marginalized communities suffering economic or cultural dislocation.

Not surprisingly, the most extreme and bigoted views are typically found in relatively homogenous and often economically distressed communities far away from many of the problems or “bad guys” they fear. When people get together, hate becomes difficult to maintain, and it is difficult not to relate with one another on some level.

I wonder how fixed all of these angry opinions would be if we all at least once spent sixteen hours at a polling station or had to live and work in ideologically integrated communities or even share a meal with “the other.”

I wonder how long it would take the narrative of this hopelessly divided nation to unravel before the truth that we all share so much more than what divides us.

Perhaps there is a small duty we should take on each and every day from now on.

If you’re reading this, you probably already accept the most basic spiritual truism that we are all part of something greater, and the goal of nirvana or heaven or whatever you choose to call it is the oneness without separation from all life.

Why not endeavor to keep that in mind the next time you are in a heated political argument or shouting at the television? After all, the concept of oneness isn’t meant to be merely a comforting idea but a way to live, a view of a better earth.

Even better, why not go out of your way to break down the daunting barriers that divide us? Reach out and engage or listen to someone outside of the type of person who would normally be inclined to agree with your point of view.

And, your engagement need not be about politics. Maybe it would be even better to focus on something that’s shared. You’ll probably find the “daunting barrier” is more like a “thin veneer.”

There is also gratitude, an indispensable daily practice in a spiritually oriented life. Once again, the issues involved in politics today are not trivial—injustice is alive and well in this world, and so much needs fixing. However, can we not each day take a moment and realize how far we have come?

For example, white supremacists were able to muster a few hundred people to march on Charlottesville, VA in the largest such rally in decades. Have we forgotten that less than a century ago the majority of America—not a fringe group—shared most of their uglier points of view?

Likewise, while poverty in America remains a stubborn problem, can we not be thankful that we are indisputably living in an age of unprecedented prosperity among humankind?

The point of this gratitude is not to engender complacency. There is simply too much at stake. However, if we can find space for gratitude, perhaps even the most strident voice of the most passionate advocate of whatever policy could be softened. The angry activist could become the happy warrior.

And that’s one of the major ironies of today’s politics, that with such an air of negativity, even the most just cause will repel fair-minded people. Gratitude can help us to stop shouting and start listening and speaking with one another with respect and love.

This is how spirituality and consciousness, which are as a genre of writing or literary interest so often completely divorced from current affairs, can help heal our poisonous political atmosphere.

After all, spirituality isn’t about escaping the world and self-soothing by occupying a peaceful place in the clouds; it’s about gaining the strength to thrive in a challenging world and even doing the hard work to make it better.

As I found, after sitting in an overtly political setting for sixteen hours with three other apparently very different people who disagreed on a lot of topics, the work isn’t always so hard. It can even be fun.