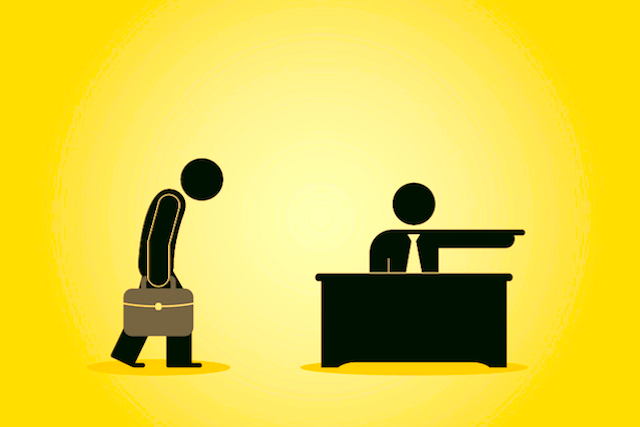 “I believe one of the greatest achievements in life is the choice to be empowered, not paralyzed, by a disappointment.” ~Lori Deschene

I was recently fired from my dream job, and this was devastating to me.

Anyone who has ever lost their livelihood should be able to relate to this experience. Vulnerability, shock, confusion, and anger dominated my feelings in the aftermath of suddenly losing a job that I loved.

What happened? My company created a fantastic referral program, and I saw a business opportunity to take advantage of it.

I reached out to multiple senior members of the staff in order to get approval for my business plan, and then I set it in motion. Two weeks later I was fired, without warning, for the very thing that I had openly sought and received approval for.

Upon hearing the news, my mind was reeling. I don’t think I’ve ever been so angry.

How could they do this to me, particularly after being told the day before that I could soon expect a promotion? How could they be so cruel? Why couldn’t they work with me to resolve the issue in an amicable way?

My life was suddenly thrown into turmoil. The plans that my girlfriend and I had made for our next year or so were thrown into disarray.

Would I have to move away from her, and how would that impact our relationship? How am I going to explain this to my friends and family? How was I going to pay my rent? How can I ever feel secure in a future job? Am I “falling behind” my friends?

What it largely boils down to is feeling a loss of my identity. Despite only working at this company for a few months, its mission is something that I felt (and continue to feel) incredibly passionate about.

I don’t just mean that I lost my identity in the sense that “I am what I do.” Of course not—I’m so much more than just my job.

But this job allowed me to act authentically; not only did I enjoy my work, but I actually felt as though I was living my life, rather than just working in order to live my life. I was doing good things, and promoting something that I loved.

As Homer Simpson once said, “If I’m not a nuclear safety whatchamajigger, I’m nothing!”

Losing my job meant that I was no longer “cutting-edge tech industry guy who is revolutionizing the world and helping the poor and downtrodden.” Or at least that’s what it felt like.

But in reality, personal identity is far more complex than this. Whatever you think you are is at best only a vague approximation of who you really are.

My former job was in customer service. And while there is absolutely nothing wrong with that, I really wasn’t using my skills to the best of my ability. There are other lines of work, even within the same industry, that would allow me to express my identity more authentically—and perhaps more profitably as well!

I had gone through something similar before, and learned a similar lesson then. Career setbacks have allowed me to “fail up” in the past, and they can do so again.

Even though it feels as though the rug has been pulled out from under my feet, past experience has proven to me that these situations can be among the most valuable.

Real life requires embracing the uncertainty of who you are and accepting the vulnerability that comes along with this fact.

My identity isn’t some fixed quality that is only expressed via a particular job. My identity comes from my values, and I have to trust that these values can be expressed in some even greater, more authentic way. In other words, I am more than what I think I am at any given moment.

Getting fired is difficult, but it need not be emotionally devastating. It helps to talk about it with trusted people who love you. It helps to write things down. And it helps to look at being fired as something to evolve through rather than something you “get over.”

So what’s next for me, then? I don’t know specifically, but I’m sure it will be something bigger, better, and more authentically me than what I have lost.

And in the meantime, I need to “let go” and forgive those who I believe have wronged me. Luckily, I have been reading my copy of Tiny Buddha’s 365 Tiny Love Challenges, and just came across several exercises that are helping me to do this (April 9th and April 27th, for those keeping score at home).

First, I’m visualizing my former manager and the HR representative “as a young child who is doing his or her best, making mistakes, and hoping for [my] understanding and forgiveness.”

The fact is, I was working for a startup, and chances are they were just doing their best and didn’t really know how to handle the situation properly. It’s quite possible that they are beating themselves up over it.

I’m certainly not happy about what happened, but perhaps they aren’t either. Everyone makes mistakes, and I forgive them for it.

The second exercise, which perfectly sums up the message I am trying to convey in this essay, is to “imagine that you are the hero in a movie, and all the pain you’ve experienced has helped you grow, and will eventually help you thrive in life… you are the hero of the story, not the victim.”

While I’m deeply saddened to have lost my job, this pain will be invaluable in fostering future growth.

If you too have lost your job recently, or a role that feels like a part of your identity, try not to see it as losing yourself. You are so much more than any one job or role. And consider that maybe this happened for you, not to you. This chapter may be over, but the next one may be even better.

Being fired image via Shutterstock

5 Amazing Blessings from Being Fired