Navigating Loss: Dealing with the Pain and Letting Go
By Alex Lickerman 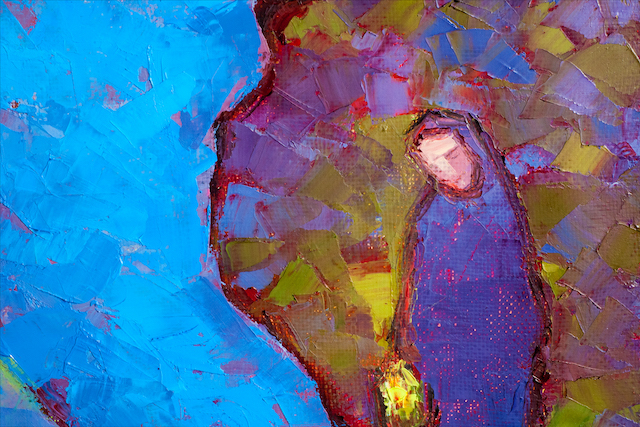 I remember when I first read the pathology report on my patient, Mr. Jackson (name changed), my stomach flip-flopped. “Adenocarncinoma of the pancreas,” it said.

A week later, a CT scan revealed the cancer had already spread to his liver. Two months after that, following six rounds of chemotherapy, around-the-clock morphine for pain, a deep vein thrombosis, and pneumococcal pneumonia, he was dead.

His wife called me to tell me he’d died at home. I told her how much I’d enjoyed taking care of him, and we shared some of our memories of him. At the end of the conversation I expressed my sympathies for her loss, as I always do in these situations.

There was a brief pause. “It just happened so fast…” she said then and sniffled, her voice breaking, and I realized she’d been crying during our entire conversation. “I’m so sorry for your loss,” I told her again. She thanked me for caring for her husband and hung up.

I’d known Mr. and Mrs. Jackson for almost seven years and had always liked them both immensely. I thought the world a poorer place without Mr. Jackson in it and found myself wishing I’d done a better job of consoling his wife, thinking my attempts had been awkward and ineffective. I reflected on several things I wished I’d said when I’d had her on the phone and considered calling her back up to say them.

But then instead I wrote her a letter.

When you called me to tell me your husband had passed away and how hard a time you were having, I found myself, frankly, at a loss. Conventional wisdom about how to console people who’ve suffered grievous losses includes platitudes like “be there for them,” “listen,” and “let them know you care”—all valid and useful guidelines that I’m sure have brought comfort to many suffering people.

But inevitably conversations end, people go home to resume their normal lives, and the wife or husband or son or daughter is left alone with pain now occupying the space their loved one used to be. Though I don’t know how comforting you’ll find this letter, I wanted to share with you some of my thoughts about grief in hopes of making your journey through it somewhat more bearable.

Why do we suffer when we lose those we love? I think the true answer is because we believe we can’t be happy without them.

Knowing how much you loved your husband, I can only imagine how strongly you must feel this to be true. And yet I often think the only reason the pain of loss abates at all is that we do become convinced we can be happy again—just slowly and unevenly.

Certainly, some people find themselves stuck in grief, unable to move on. Sometimes this happens because we actually become reluctant to surrender our grief even after it’s run its proper course, believing the pain of loss is the only thing keeping us connected to our loved one, or that to feel happy again would be to diminish the significance of the relationship we once enjoyed.

But neither is true. Even when people we love die, our relationships with them do not. We continue to have feelings about them, memories of things they did, imaginings of things they might say were they with us now. Just because the pain of losing them diminishes with time, their importance to us need not.

Normal grief is like a roller coaster: there are ups and downs, moments of pain intermixed with relief.

If, however, after the first six months or so there seem to be fewer periods of relief rather than more, normal grief may have changed into full-blown depression. If you think this might be happening at any point, please let me know. I can help.

Everyone grieves differently. Don’t ever let anyone tell you how to do it. If you want to talk about your husband with others, do. If not, don’t. There’s definitely something mysterious about the human psyche—some intrinsic force within us that continually seeks to engulf pain and suffering the way our white blood cells engulf viruses and bacteria.

It’s an elixir we seem to swallow at the very moment our loss occurs that immediately begins to work on our suffering without us even knowing it but which nevertheless somehow eventually cures us of it.

After experiencing a devastating loss, if you’ve allowed yourself to feel the legitimate pain it’s brought and not sought to avoid feeling it, things slowly start to improve. We wake one morning to find there’s something in the day we’re actually looking forward to; or someone says something funny and we actually laugh; or we find ourselves able to plan things again, even if only a trip to the grocery store.

But there’s no definite timetable for this. Don’t allow anyone to hurry you along with their expectations about when your grief should end. Just know that it will.

It may seem to you now, while in the middle of the worst of it, that it won’t, that your happier self was only a dream and that this grieving self is here to stay for good. But that’s an illusion brought about only by your current life-condition. Nothing is forever, including the pain of loss.

Don’t grieve alone. I worry that you have no one with whom to share your grief (you’ve told me in the past how you were all alone except for your husband). While you may not have much energy for this, I find myself hoping you’ll join a support group, either at your church or by looking online.

There’s something often magically healing about spending time with others who’ve had or are having painful experiences similar to your own.

It may seem an overwhelming prospect now, utterly beyond you, but often by holding someone else’s hand, by becoming their support, you’ll find your own pain lessens just a little bit.

When you shine a light to guide others on a dark road, your own way is also lit.

Forgive yourself your failures. You said on the phone you “felt guilty,” but not what you felt guilty about. I wondered about that.

I wondered if you felt guilty about having spent time doing things like seeing other people or watching television rather than spending every moment with him; or about feeling tired of caring for him; or about not always having a positive attitude when you were around him; or for wishing the nightmare of his illness had actually ended sooner—or any of a myriad of things family members have told me have made them feel guilty, too.

Or maybe you feel guilt about the decisions you made when your husband was no longer capable of making them himself.

The end of a person’s life is often composed of gut-wrenching choices that land squarely on the shoulders of family members: to put in a feeding tube or not; to use mechanical ventilation or not; to use heroic measures or not; to decide not to press forward with an intent to cure but rather with the intent to palliate.

I know you struggled mightily with the decision to stop treatment and bring him home to be comfortable, but you must know your decision did not cause his death. His disease did. His disease is what thrust you into a situation you didn’t ask for or want, but accepted with grace, making every decision with as much deliberation and wisdom as you could muster, even when you were exhausted, and always with an eye towards his comfort.

Forgive my presumption, but if you feel guilt over any of these things—or over other things I didn’t mention—you must forgive yourself.

There was never a need for you to be a perfect caregiver—only a caregiver who cared, and that you most certainly were. The person who gets sick is never the only one whose life is deeply affected by their illness. This was your experience, too.

I want you to know that watching the way you were with your husband always inspired me. I can only hope to face losses in my life with as much courage, acceptance, and humor as you and your husband did both.

While no one knows what happens when we die, we can say with certainty that we lie between two equally inconceivable possibilities, one of which must be true: either the universe has always existed and time has no beginning, or something was created from nothing.

Either case makes every one of us a miracle.

Alex Lickerman is a physician, the former director of primary care at the University of Chicago, and has been a practicing Buddhist since 1989.  He blogs at www.happinessinthisworld.com.