Why I No Longer Depend on Anyone Else for Happiness, Fun, or Excitement
By Matana Williams 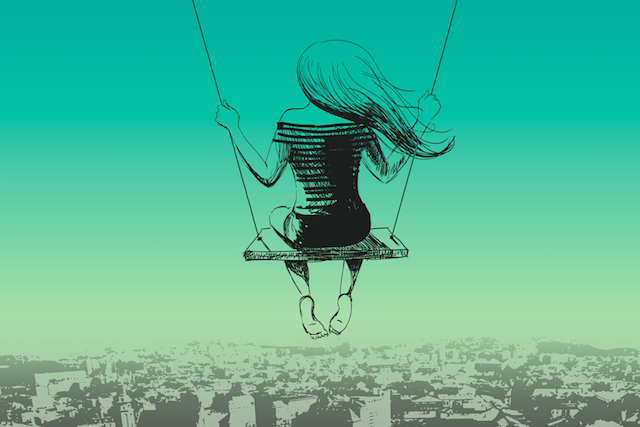 “Never put the key to your happiness in someone else’s pocket.” ~Unknown

It was Saturday night. I sat, at my breakfast bar in my apartment, alone and in semi-darkness. Only one small lamp was turned on in the corner.

I was fuming, confused, and most of all, sad. I sprang off the breakfast barstool and began to pace. There were so many emotions circling around in me I had to keep moving in an effort to release them.

I spun around and looked at the clock above my kitchen—it was almost 7pm! He had said he was going to be there by 6pm.

Why was he not there? Did he not know I was depending on him? Didn’t he know I had planned my schedule to be there in time to hang out?

I didn’t have any other plans and felt stuck waiting in limbo. Where was he? I felt the emotions rising toward my throat as they bubbled up and threatened to explode.

I picked up my phone and called my boyfriend, trembling with frustration as the phone rang. He picked up on the third ring.

I had been waiting to hang out with him after work all day. I had imagined us meeting on time at 6pm and having a great evening together.

In my head, I had imagined us going out for a bite to eat and then maybe catching a new movie at the theatre or going to a comedy club. My day had been uneventful and boring, and I was looking forward to having an exciting evening.

I had planned and expected and prepared perfectly, and he was ruining it again! Like so many nights in the past, his job had kept him late and he was not there for me when I needed him.

“Where are you?” I barked in his ear as soon as he picked up the phone. “I’ve been waiting. I’m here at my apartment waiting to hang out with you, and you’re not here. I’ve been looking forward to hanging out all day!”

He seemed taken aback by my anger, and he fumbled for an answer to soothe me. He explained that work had kept him late and he was on his way back. He apologized for not updating me on his arrival time and assured me that he would be there soon. I spat out an “Okay, whatever,” and hung up angrily.

And there it was—the usual start to our weekends together. I slumped down in a kitchen chair realizing I had done it again. What was wrong with me?

My boyfriend worked a lot. Almost ten-hour days when you added it all up. And he worked Saturdays too. Still, I always seemed to depend on him to bring some excitement and joy to my monotonous days.

Every Saturday would start the same: I would feel like I had been bored and waiting all week to have time together and do something fun, and he would usually arrive late or tired after work and I’d be crushed and irritated. I would then fire off some hurtful words that would give a sour taste to our weekends together right from the start.

It was a vicious cycle. And I never understood why I was so dependent on my boyfriend and why I felt so abandoned and hurt if we were not able to hang out exactly when or how I wanted.

It wouldn’t be until several weeks later that the cure to this vicious cycle came to me and the person to blame became clear.

One Saturday night my boyfriend decided to go out with one of his close guy friends instead of hanging out with me. Immediately the abandonment and lonely bells started to sound off noisily in my head. I felt the anger rising in me, and I spent the next day simultaneously fuming and hurt.

But the following day when my boyfriend and I sat down to talk about it, I started to realize something: While he could make an effort to text or call me if he was going to be late in the future, the real issue was not with my boyfriend. The problem was me.

It took a few days of serious introspection, but I finally realized that I depended on my boyfriend for my happiness. I expected him to always be there emotionally and physically, to handle any issue I was going through.

I unknowingly expected him to tackle any kind of emotional turmoil in my head, and to be there to take me out and show me a good time whenever was convenient for me, regardless of his schedule.

In fact, if he didn’t do these things perfectly and at my convenience, I felt hurt and abandoned and lashed out. I saw it as a sign that he did not love me and did not care about our relationship.

It was hard to admit, but having a boyfriend had allowed me to use another person as a crutch. I expected him to be perfect and give me all the things I was not providing for myself—emotional release, a social life, and validation.

It became clear to me that I had put an unfair burden on him. I knew our relationship would not survive if I did not make a change.

Here are the top three things I realized during that time (insights that can apply in romantic or platonic relationships):

1. Expecting someone else to make me happy is objectifying them.

In a sense, my boyfriend was a tool for my happiness. I had placed an enormous amount of pressure on him to perfectly handle all my difficulties and supply all the things that were missing in my life.

But only I have the right toolbox that can “fix” what isn’t working. My boyfriend is not a tool. He is a whole person with his own emotions, struggles, goals, hopes, and dreams. Reducing him to a tool for my happiness is objectification, and it limits the growth and deepening of our relationship.

It is unfair to expect someone to help you become a whole person. More importantly, we already have everything we need within us to live our best life; we do not have to look outside ourselves or to anyone else.

This relationship has taught me many lessons, but perhaps the biggest one is that I cannot wait around for anyone else to bring happiness and excitement to my life. I have to go out there and create it! I also cannot expect one person alone to take my loneliness away.

2. I alone am responsible for my happiness and excitement in life.

Because I work from home and lack coworkers and social interaction, I am susceptible to feeling isolated. There were so many days when I would count on my boyfriend to come pick me up, take me out, or invite me to a fun event. If this did not happen, I would feel unhappy and angry. But really, I should never depend on someone else to bring me excitement, joy, or happiness. That is my responsibility!

I eventually realized that instead of depending on my boyfriend to fill a void in my life, I had to start taking accountability and doing it for myself.

From then onward, I started reconnecting with old friends and going out more. I said yes to different activities and invitations. Creative events like painting, spoken word, and concerts make me happy, so I now make a point to do these things with or without my boyfriend.

Having my own friends outside of my romantic relationship—my own interests, my own invitations, and my own plans—keeps me feeling whole. It also reminds me that I have to take charge of my day, my emotions, and my social life.

I started getting out of my comfort zone and outside of the overly introverted bubble that kept me so lonely all the time. Now that I have reconnected with and strengthened my relationship with my own circle of friends, I no longer put pressure on my boyfriend.

I now know that even if he has to cancel plans or he chooses to hang with another friend, it does not make or break my day. I have my own support group and circle of friends to hang out with, and I can bring excitement to my own life.

3. You can reclaim your power.

If you’re like me, you are probably in the habit of placing your power in others’ hands. You may think thoughts along the lines of:

If he doesn’t text me today, I’m going to be crushed

If she doesn’t go to this event with me tonight, I’m going to be so disappointed and I’m just not going to go at all.

If they don’t invite me to the party on Friday, my night will be ruined!

I used to say these kinds of things often, and still have to fight against this kind of thinking. In all of these statements, I am letting someone else’s actions control my own mood and happiness. I am letting the actions of others affect what I choose to do.

Oftentimes, if my boyfriend and I went the day without talking, I would let it ruin my entire day. I didn’t even try to find things that I liked to do to spice up my day, or hang out with friends, or do something exciting. I just wallowed in my pity and irritation. I allowed his actions to control me. I gave my power to him.

I would also depend on my boyfriend to go to events with me. If he was not able to make it because of his job or an emergency, I wouldn’t go at all (even if I had been looking forward to it). Then, because I felt like I had missed out, I would be mad and disappointed with him.

That is releasing my power into his hands. Now, even though I can be quiet and sometimes nervous about new social situations, I will make a point to still go to an event even if my friends or boyfriend cannot make it. As my mother used to say, “Don’t let one monkey stop your show.”

Do you put your power in other people’s hands? Will someone canceling plans or doing something unexpected wreck your day, or will you empower yourself to create your own happiness?

Even if someone changes plans or cannot go to a fun event with you, if it will bring you happiness, go anyway! Do not allow the actions of others to control your actions or emotions. Reclaim your power.

I am working to create a tighter circle of friends, and I understand clearly that I cannot depend solely on my boyfriend (or any other person for that matter) for my happiness and social life. Our relationship will not survive if I do not learn to take responsibility for my happiness and stop waiting around for one person.

This had been a hard lesson for me, but it is one that I chose to act on every week, and I will continue to work on it because the journey to empowerment and happiness is a lifelong one.

Matana Williams is an aspiring writer, poet, spoken word artist, and lover of creativity. She currently lives in Atlanta, Georgia where she is working on finding her slice of happiness in life. Stay tuned for her first romance novel in early 2019. You can connect with her at Matana.williams@gmail.com and discover her writing at pinkflamboyance.wordpress.com.

Don’t Let the Outside World Control Your Happiness