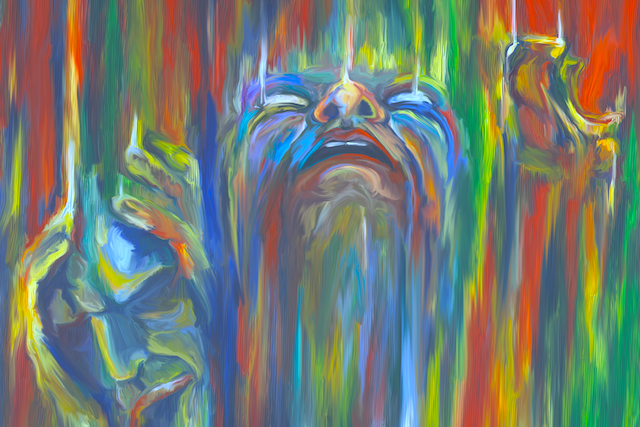 “If you are patient in one moment of anger, you will escape a hundred days of sorrow.” ~Chinese proverb

As Tiny Buddha grows larger, I find there are a lot more people emailing me with requests. The people-pleaser in me wants to say yes to everyone, but the reality is that there is only so much time in the day—and we all have a right to allocate our time as best supports our intentions, needs, and goals.

Recently someone contacted me with a request that I was unable to honor. After I communicated that, he made a sweeping judgment about my intentions and character, ending his email with “Buddha would be appalled.”

As ironic as this may sound given the context of this site, I felt angry.

I felt angry because I have always struggled with saying no, and this was exactly the type of uncomfortable encounter I generally aim to avoid.

I felt angry because I felt misunderstood and judged, and I wanted him to realize that he was wrong about me.

I felt angry because I assumed he intended to be hurtful, and I didn’t feel like I deserved that.

I ended up responding to his email fairly quickly with a little bit of defensiveness, albeit with restraint. After I pressed send, I felt a little angry with myself for letting this bother me. Then I realized that this was a wonderful exercise in learning to deal with anger.

It’s inevitable that I’ll feel that way again—and many times, with people I know well and love. We all will. We’ll all have lots of misunderstandings and annoyances, and lots of opportunities to practice responding to anger calmly and productively.

If we’re mindful, we can use these situations to better ourselves and our relationships.

With this in mind, I put together this guide to dealing with anger:

SIT WITH YOUR ANGER

1. Allow yourself to feel angry.

You may think you need to cover “negative feelings” with positive ones. You don’t. You’re entitled to feel whatever you need to feel. We all are.

2. Make a conscious choice to sit with the feeling.

Oftentimes when I’m angry I feel the need to act on it, but later I generally wish I’d waited. Decide that you’re not going to do anything until the feeling has less of a grip on you.

3. Feel the anger in your body.

Is your neck tense? Is your chest burning? Is your throat tightening? Are your legs twitching? Recognize the sensations in your body and breathe into those areas to clear the blockages that are keeping you feeling stuck.

4. See this as an exercise in self-soothing.

You can get yourself all revved-up, stewing in righteousness and mentally rehashing all the ways you were wronged. Or you can talk yourself down from bitter rage into a place of inner calm. In the end, we’re the only ones responsible for our mental states, so this is a great opportunity to practice emotional regulation.

5. Commit to acting without seeking retribution.

Decide that you’re not looking to get even or regain a sense of power. You’re looking to address the situation and communicate your thoughts about it clearly.

6. Check in with your mood before the incident.

Were you having a bad day already? Were you already feeling annoyed or irritated? It could be that someone’s actions were the straw that broke the camel’s back but not fully responsible for creating these feelings.

7. Ask yourself: Why is this bothering you so much?

Is it really what someone else did, or are you feeling angry because of what you’re interpreting their actions to mean? (For example, you may think that your boyfriend not showing up means that he doesn’t respect you, when he may have a valid explanation).

If you’re angry with someone for doing something that you’ve done many times before, your feelings may be magnified by seeing a behavior of your own that you’re not proud of. Look for all areas where you may be projecting your own traits onto someone else to get closer to root of your feelings.

Grab your pen and walk yourself through it step by step. What did the other person do? Are you assuming negative intentions on their part? Have they done this before? How do you feel besides angry—do you feel insecure, frustrated, or confused? Get it all out.

Now that you know more clearly what part the other person played in your anger and which part is more about you, write a letter to him or her. You may send this letter, or you might end up just burning it. This is to help you clarify what exactly you’d like that person to know, understand, or change.

11. Now that you’re clear about the role you played in your anger, initiate a verbal conversation about what bothered you.

You could also send the letter you wrote, but it will be easier to clarify parts the other person doesn’t understand if you’re having a direct back-and-forth exchange.

So instead of saying, “You didn’t show up, so you obviously don’t care about me,” say, “When you forget about the things that are important to me, I feel hurt.” In this way, you’re not assuming the other person meant to make you feel bad—you’re just explaining how it makes you feel so they can understand how their actions impact you.

13. Resist the urge to unload all your unspoken grievances.

Sometimes one annoyance can open the floodgates to a laundry list of complaints—but no one responds well to a barrage of criticism. Stick to the issue at hand, and address the other things at some other time.

14. Stay open to the other person’s perspective.

It’s possible that they feel angry, too, and think that you’re the one in the wrong. It’s also possible that there isn’t a right or wrong, but rather two people who see things differently and need to see each other’s point of view.

15. Focus on creating a solution.

If your goal is to get the other person to admit that they’re wrong, you’ll probably end up in a power struggle. Focus instead on what you’d like to change in the future—for example, you’d appreciate it if your friend would come straight to you next time instead of complaining about you behind your back. You can help facilitate this by owning some responsibility—that you will listen if they come to you instead of getting emotional.

LEARN FROM YOUR ANGER

This situation taught you something useful about what you value in the people you choose to be friends with—maybe directness, humility, or loyalty. This will help you decide which people you might want to spend more or less time with going forward.

18. Learn how to communicate clearly.

This experience was an exercise in expressing yourself in the best way to be heard and understood. There will definitely be more situations like this in the future, so this is good practice for misunderstandings and struggles to come.

19. Learn how you can improve your response to anger going forward.

20. Learn what you’ll do differently in the future.

You probably realized somewhere along this journey that you played some role in the situation. Very rarely is it black and white. Once you own your part, now you can use that knowledge to create more peaceful relationships going forward.

And lastly, forgive. As I wrote in my post about forgiveness, very few of us get to the ends of our lives and say, “I wish I stayed angry longer.” We generally say one of the following:

I love you. I forgive you. I’m sorry.

If that’s likely what you’ll feel when you realize time is running out, why not express it now, while you can still enjoy the peace it will give you?

*My apologies for not responding to every comment on this post! I have a hard time keeping up with all comments on the hundreds of posts I’ve shared over the last decade.