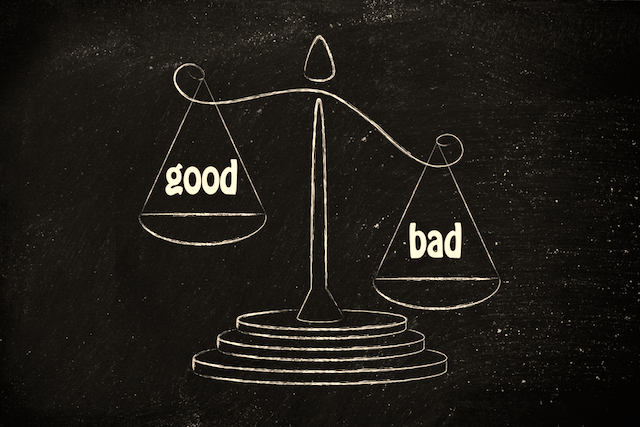 “Nothing is either good or bad, but thinking makes it so.” ~William Shakespeare

Above all, I feared that people would leave me if I ever communicated as my true self.

In my family and culture, feelings are things that are best when denied. I was taught they are a liability that, if embraced, would lead to fights, pain, and loneliness. I was encouraged to ignore, avoid, and push them down into the recesses of my mind.

Not surprisingly, by thirteen I developed severe depression, resulting in poor coping mechanisms, a reliance on medication, and a suicide attempt.

The need to express myself was natural and necessary, but my belief that it was wrong prevented me from ever owning my voice. Instead, I communicated in unhealthy ways:

And while I tried to suppress and control this side of me, it came out in waves of anger and hurt. Through decades of transformation, I now understand that many of my behaviors were based on my belief that things are either all good or all bad.

So how did I unlearn this belief and learn to express my true voice?

By learning how I played the game of black and white.

When we’re young, we’re taught that certain aspects of our personality are bad or wrong, while others are good and useful. And like most things we learned as kids, we need to unlearn them.

In order to fit in, feel loved, and gain acceptance we disown the “bad” qualities we believe we have and try to express ones that are seen as “good.”

Unfortunately, the world isn’t that simple. Most things exist on a frustrating spectrum of grey.

Fortunately, we can learn to re-own these repressed qualities and transform them into qualities that benefit us and others.

The first step to seeing how you play the game of black and white is to determine which traits you’ve put into each category.

What qualities in others make you angry? Often the aspects of others that trigger us are the things we don’t like about ourselves. These are frequently the areas that we need to work on the most.

For example, when other people stated their boundaries, I previously felt threatened because I wasn’t comfortable setting my own. This taught me that I needed to address this issue in my own life in order to feel whole and attract other people with healthy boundaries.

To begin, list several “bad” qualities. These are the traits that go in your “black” pile (i.e.: lazy, late, disorganized, loud).

What qualities do you think of as good, desirable, and appropriate? These are the qualities that we are praised for or that we value in ourselves or others. List several “positive” qualities. These are the traits that go in your “white” pile (i.e.: honest, flexible, driven).

Next, determine how the game manifests in your life.

In what ways do you play the game so that “white” must win? What have been the consequences? For example, in believing that silencing my voice is good, I’ve been in unhealthy relationships, had angry outbursts, and felt depressed.

If you were to give the disowned trait a voice, what would it say? For example: mine would tell me that it’s safe to be the real me.

Finally, embrace the trait as neither good, nor bad, simply a part of you.

If you were to re-own that trait, how could it benefit you? Often, qualities we view as “bad” are harsh criticisms or expressions of our own fears.

For example, I often find that I am frustrated when I perceive someone to be lazy. This, however, is merely triggering my own fear that I am not doing enough. Owning this trait allows me to see that there are times when I should relax.

Owning it taught me that I don’t need to overwork in order to prove that I am worthy. Owning my lazy side would allow me to live a more balanced life and cultivate self-love.

Creating awareness around how you play the game of black and white will give you the freedom to consciously choose your behaviors instead of going on autopilot.

It will allow you to stop stumbling through life and begin navigating it on your own terms. You don’t need to accept your false beliefs when you have the power to change them.

Isn’t it time you mastered your life?

Good and bad image via Shutterstock

Amita is the Founder of AlignedHolistics.com, a coaching services company that empowers individuals to create lasting change from a place of self-love instead of self-discipline. Amita has been featured on CBS, NBC, and the Huffington Post. Book your breakthrough session today and download your free copy of "10 Tips To Become The Happiest Person You Know."

How to Keep Your Strengths from Becoming Weaknesses