On Dealing with Fear: Stop Judging Yourself and Be
By Sam Russell 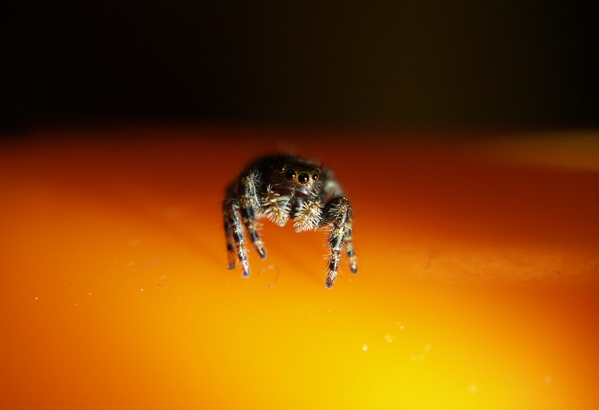 “Fear is a natural reaction to moving closer to the truth.” ~Pema Chodron

I’m arachnophobic. Last night, a large spider took up residence on the wall in my room. The shock of seeing its dark mass seated comfortably against the stark white of the paint made the blood drain from my head.

I have ways of dealing with my fears. Sometimes I ignore them and plunge in head-first without thinking; sometimes I avoid them altogether and run for the hills. When it comes to spiders though, I humanize the situation.

I gave Richie, as I named my new roommate, the same courtesy I give to all animals.

After a bit of careful planning, I took a deep breath and eased Richie into his temporary residence, ready for relocation to the floating garden. He was evidently more terrified than I was, although he had no reason to be. Even though he felt mortally threatened, I treated him with the same kindness and respect that I show my pets.

I realized then I needed to do the same for myself. I needed to give myself a little kindness and accept that my fears aren’t necessarily based in reality.

You see, I’ve recently come off a bout of depression.

When I’m badly depressed, I stop entirely. I have an obligation to care for my animals, so I drive myself to feed and clean them, but that fails to apply to me. I don’t eat, I don’t sleep; I don’t do anything other than sit and gaze blankly at my surroundings.

My laundry piles up in a corner. My desk becomes smothered in books, papers, and DVDs. I think it’s the same feeling you’d get if you were witness to a horrific event or accident; life stops and everything is painfully numb.

Daylight becomes unbearable as does the natural world around me. I don’t want to be around anyone, let alone talk to them. Most of the time, I skulk off back to bed to stare at the ceiling and sob. It feels like my life is over and the only thing left to do is vanish.

The grief I experience during a depression is overwhelming but never has an obvious cause. It’s not like I can figure out what’s upset me and try to patch things up. But I don’t like to think I end up in this state because of nothing; my depression comes about because of life.

It’s been tough and I struggle a lot emotionally. I’m sensitive and a chronic worrier. I’m frightened and lonely. Big things to admit, but this is my draw in life and I try to make the best of it.

Being depressed is something I dread because I know how difficult it is to climb back out of that hole and worst of all: I don’t have any control over it. I can’t say when it’ll happen, how long it’ll stay, or how bad it’ll be. I have to brace myself.

The truth is I’m not just afraid of being depressed (though I am); I’m afraid of letting people down and being judged.

I don’t like to think that I’m afraid of what other people say, I like to pretend I’m a rebel (in part, I am) and that emotionally, I’m tough as nails. In reality, I’m a bit of a softie and open to getting my feelings trampled.

But I’ve come to realize this: we often create fears based on past experiences and blow them out of proportion. They’re not always grounded in reality as it is. Even when they are justifiable, they’re not the things that create us—we create ourselves with what we tell ourselves and how we act.

By believing that our fears are real and irrefutable, we crush ourselves under the weight of their burden.

Every now and then someone comes along and shows you people won’t always act as you feared they would, just like the way I spared Richie instead of squishing him.

Sometimes people will make snap judgments when you’re openly struggling, but we don’t have to join in and judge ourselves. Everyone has their challenges. We might not all deal with depression, but no one is without struggles and sometimes we need a break.

Sometimes I need a break to take care of myself before I can engage with the world.

Sometimes I push myself too hard to become what other people expect of me—people who think I can just up and change into someone who doesn’t deal with depression.

The truth is that I don’t want to be cured. I want to be free to be who I am. And I want to face and release my fear of being judged for that, which I can only do if I stop being so hard on myself.

Sometimes you have to take a deep breath, look into yourself without judgment, and just be honest with yourself about what’s really scaring you. It’s the only way to identify irrationality, learn what you need, and change how you think and act.

We can challenge and overcome our fears if we’re willing to take power away from them. They aren’t as powerful as we think they are.

The world isn’t waiting to squish us. We definitely shouldn’t squish ourselves.

6 Mistakes We Make When Depressed or Having a Panic Attack