On Finding Your Purpose & Running Down a Dream
By Maelina Frattaroli 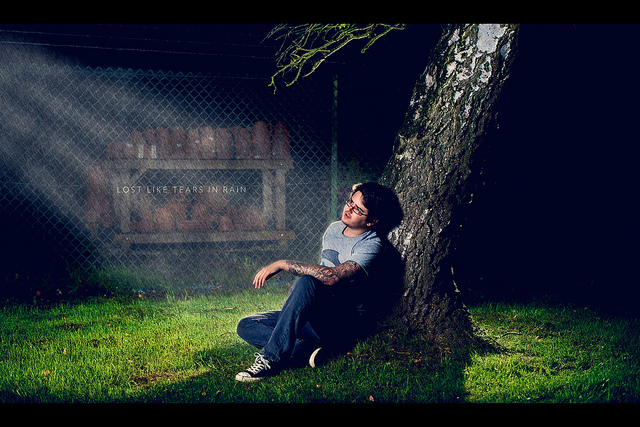 A revelation came to me the other day during lunch with my co-worker.

As I wolfed down my germ-infused salad-bar lunch, I thought about my father for no particular reason other than I probably miss him since moving out of my parents’ house two weeks ago.

I’ve never been one to admit things, show emotion, or get all mushy, but in my own way I’m very proud of my dad. Although it’s hard for me to let him know, he really is my hero.

As co-worker X took a pause from chewing, he asked, “What do you think your purpose is?”

I took a moment to let that commentary sink in.

Then I replied, “You know who I really envy and admire? My father. He does the hardest manual labor, sweats under the sun, cuts his hands up on stone, turns them purple with acidic grape juice, battles with poison ivy roots, snow plows during the most ungodly hours so rich people can have clear driveways, has more splinters than anyone I know, and he’s never, ever complained. In fact, he’s the true definition of service with a smile.”

Okay, maybe I didn’t phrase it that eloquently, but let’s pretend I did.

Immediately afterward, X stated, matter-of-factly, “It’s because he loves it. He does what he loves. That’s hard to come by these days.”

I remember a time when I was very young, I’d say around five. I was sitting on my father’s lap, tracing my fingers across the rough patches and cracks of his hands. His wedding band was scraped a little and his pointer finger had a very deep gash in it.

I asked why his hands were broken, to which he replied, “I got a boo-boo at work.”

It was then that I decided I wanted a job in a hospital. I wanted to be a pediatric nurse. To a five year old, it seemed like a decent gig, mainly because I loved babies and wanted to be around them.

Did I fulfill that dream? No. Is this my dream now? Not in the least. Do I even like babies? Sure, when they don’t deafen you with their cries. All I knew was I wouldn’t get my hands chopped to bits by flagstone, granite, tools, and harsh concrete. And if I did, the surgeon’s room would be right around the corner.

My younger brother always wanted to uphold the Sandy Frattaroli Masonry family legacy. Why would he, at that age, wish hard, manual labor during scalding, humidity-infused summers over a college education?

Because my father’s work has value. A unique kind of value all its own, something that cannot be taken away from him. But, nowadays, the road to get there is treacherous and grueling and filled with people who take this craft for granted.

My brother went to college and so did I. Now, we work in our respective industries.

My father’s getting older, approaching sixty in just a couple of years. He’s stubborn, set in his ways, and will not lay down the stone and call it quits until he passes at a much older age. His hands remain cracked, although he’s progressed to softening them with Vaseline Intensive Care lotion.

The difference between my father’s generation and mine is that, nowadays, we are overwhelmed with options, both personally and professionally, as the world develops. We’re in a constant struggle as we try to define our purpose and who we are.

We read too much into the future but still dwell on the past. We battle between labeling who we are by our professions vs. who we are by what drives us.

My father was able to turn his passion into a lifelong devotion. Back then, there wasn’t much choice if life and education were unaffordable for you. Now, we have everything, but the pressure exuded on us makes it much rougher.

Like my father, I want to run down a dream, go wherever it leads, and work on a mystery (kudos to Tom Petty). I want to write and connect with like-minded people through my words, but I do not want to define myself. Ever.

I want to constantly evolve and find my purpose. I want my purpose to be adaptable and dynamic. I want to be receptive to change. Like a single flagstone giving way to a dream sidewalk built by my father, I’ll start one word at a time.

If you have a dream, run with it. Try your best not to define or restrict yourself along the way. Your passion is your best set of wings.

Maelina was born knowing she wanted to pursue writing. She believes most of life’s complexities can be cured through the written word; listening to Neil Diamond; and eating garlic-infused dishes. In her spare time, she writes poetry, hikes mountains, and wines-and-dines with good company.