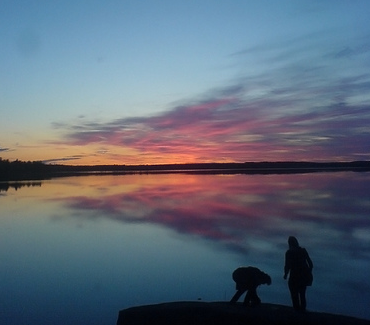 “The final proof of greatness lies in being able to endure criticism without resentment.” ~Elbert Hubbard

My self-awareness grows while watching an eight-year-old boy navigate Sudoku.

He wants to be good at the game, but he doesn’t want to do the work. He wants to know the next right answer without having to think.

His approach to the puzzle is one box at a time, filling in a number at random. He doesn’t realize each little mistake right away; he may get through a row or column, but eventually it catches up with him.

He then tries to backtrack, which you know, if you’ve ever played Sudoku, is nearly impossible. If one set of numbers doesn’t work, chances are many other numbers are incorrect, and you cannot move forward with the puzzle.

I suggest erasing the whole puzzle and starting over. This advice is not well received by an eight year old. He resists. He pouts. Sometimes he cries and/or storms off.

I get frustrated with him because I am sitting there guiding him, and when he listens to me, it takes a fraction of the time to complete each puzzle. He asks for my help, but then he doesn’t focus and take the time to use his brain.

When I guide him step-by-step through the puzzle, he is able to identify and explain why a certain number is appropriate for a specific box. When I step back and have him work through it on his own, he reverts back to the rushed guessing game.

This process represents so much for me.

I am a writer. I am working on various projects; one in particular has taken over my focus—metaphorically, my Sudoku puzzle.

I have a mentor/writing partner in my life who provides the same willingness to guide me as I do for the boy. I better understand the frustrations he expresses having with me because of my role as the boy’s guide.

Instead of admitting that he does not know the right number for a certain Sudoku box, the boy guesses. Instead of me admitting that I don’t know what to do next to further my project, I guess.

As with guessing in Sudoku without any logic, I get it wrong every time I resort to an illogical guess.

My mentor knows “the business” and understands what works and doesn’t work. When he sees me placing a two in a row that already has a two in it, he offers advice in the hopes that I will discover that a two is not what is needed for that box, and more importantly, for the whole row.

The figurative “two” for me professionally can be a missed connection with a potential business opportunity. It can be the miscommunication of a project to someone interested in it. It can be a distraction in my personal life that inadvertently takes me a step backward from my goals. Or, it can be as seemingly minute as one line in a writing project.

If I am insecure and simply guessing to avoid him recognizing that I do not have an answer at all, I am standing in my own way; I am preventing the successful usage of my own brain.

I believe that ego, pride, and insecurity stand in my way of listening to my mentor. I want so badly to impress him that I venture a guess as to not disappoint him. The problem with a guess: it is disconnected from my true being and does not add to the solution of the puzzle.

As much as I want to run the other way from criticism or being seen as not knowing, my work is to keep showing up. When advice is being offered, I need to listen.

I am working on excluding emotional reactions and instead, staying present to fully absorb and gradually integrate his feedback into my operating system.

My mentor is vocal about what he sees in me and when reverting back to my engrained thought processes hinders me. He demonstrates patience and keeps passing his life lessons down to me.

Without realizing it, I have been doing the same for this eight-year-old boy.

Our individual resistance is only holding each of us back. His desire, and my desire, to “be right” while contributing the least amount of effort to figuring out what is “right” ultimately only limits each of us.

I am now committed to getting out of my own way.

The first step is to eliminate the victim role I played for the first twenty-nine years of my life.

In my past, I have resented those who tried holding me accountable for my actions. I wrote people off as mean or jealous, or a number of other blame-game schemes to avoid ownership. I wanted to have an answer, even if it was the wrong one.

My ego developed so strongly that I had to be right. My ego did not allow outside opinions or advice to influence my perspective, even though they would have been helpful for my development.

For years my ego kept me from learning the lessons I needed most for the personal evolution I desire. Ironically, the lesson I most needed was to see that ego has no beneficial purpose in my life, or anyone else’s. And, that operating from the ego was negatively affecting all of my relationships.

The ego is fear-based; I want to live love. The ego is limiting and controlling; I am an open-minded, free spirit.

I want to hear the truth and to let it in. I want to do the work to change that which I do not like about myself, or that which holds me back. I see the goal and I am willing to hear the harshest criticism to achieve it.

I would love to share the tools that I have found helpful in my self-awareness process thus far:

Surround yourself with people who constantly challenge you.

My mentor clearly challenges me, but so does the eight-year-old boy. Some people have immediate family who provides the challenge, but some have to do the work to seek their own challengers.

Play the hand you were dealt and find those people who force you to question your thoughts and behaviors, and who ultimately want the best for you. The work is ours to do, but we cannot do it all alone.

Identify your own Sudoku life puzzle.

Based on your goals and aspirations, develop a maneuverable puzzle. Design what you can; choose the rows and columns. You will not know how to solve it just yet, but you will have the boxes you are working to fill in.

You can then take action each day to discover what number completes each blank box. When the puzzle is complete at some point in the future, you will know that you did the work to manifest what you most wanted.

Lastly, do not be afraid to be yourself.

You will be the holder of your own stamp of approval; no one else’s opinion of you can outweigh what you believe about yourself.

I found Lori Deschene’s article: 10 Reasons to be Okay with Being Disliked extremely helpful.

One line that stuck out to me that is particularly relevant to my message: “Your yeses and nos shapes your future, so choose them wisely.”

Each Sudoku life puzzle box can be likened to a yes or no choice that determines your overall solution—so start choosing!

When Someone You Love Is Grieving: How to Really Help