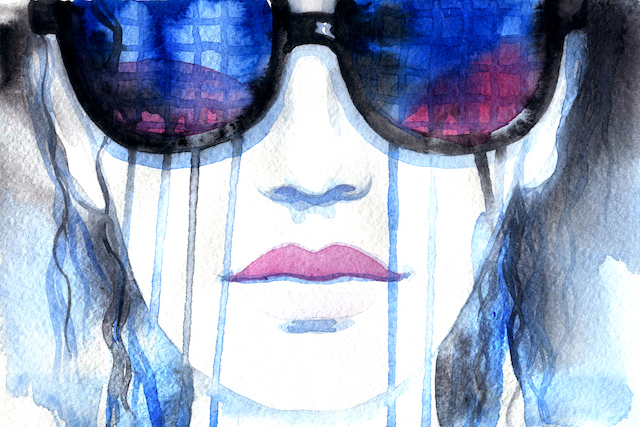 “Just a reminder in case your mind is playing tricks on you today: You matter. You’re important. You’re loved. Your presence on this earth makes a difference whether you see it or not.” ~Unknown

I got myself out of bed, brushed my teeth, and went through the motions until things inside my mind started to feel unbearable.

The first thing I did was try to reason with myself, tell myself that, of course I matter. I tell everyone else in my life that they matter and they’re enough just as they are. But there is a tiny voice in my mind that feels loud. Just chanting, “You know you’re trash, people are lying to you. You know you do terrible things and have hurt other people. Just give up.”

It reminds me of every mistake I’ve ever made. It attacks me with memories of my hurting someone with how I worded something or reminds me of someone who blocked me on social media, or just said, “I don’t like her because of xyz.”

This feels immobilizing. By the time I am done with this thought process I cannot leave the living room chair I am sitting in. I pull a blanket up to my chin, curl up into a small ball, and start crying. “You’re right,” I say to myself. “You win. I should just give up.”

My mind is spiraling with everything I have ever done that went unnoticed, that no one cared about. The essays I wrote that only a few people read. The points I made that were later recycled and went on to be successful once someone else made those same points that didn’t seem to matter when they came from me. And I have the overwhelming feeling that I deserved the bad reception, because I, too, am bad.

Never mind that there are dozens of things that I’ve done that were greatly appreciated. That made a difference. That moved someone else enough to say, “This helped me.”

Never mind that sometimes we can’t control algorithms, SEO, and the like.

Never mind that sometimes you make a stupid spelling mistake even though you re-read your piece fourteen times. You just didn’t notice it, but people were turned off from the piece because of it.

That’s the thing, being a mental health advocate, I feel like my whole purpose on some days as I struggle to get by is to hear someone say, “This helped me.” And if I helped no one, then why did I do it?

But while I was busy worrying about who I have helped and if my helping got noticed, I may have forgotten to help myself.

All the clichés, the putting on my own oxygen mask first, filling my own cup to fill others, they are reminders that I need on a daily basis, or I risk becoming my own victim.

And honestly, to me, there is nothing worse than someone who is helping other people just to be a martyr. They continue toiling to help others but neglect themselves so that they can say, “I almost died doing things for other people.”

Who are you useful to once dead, or even just burned out? The fight for mental health awareness and to end the stigma is long arduous. And if my goal really is to help others, to be there for the long haul, then I must find a reason to also do it for myself.

That mean voice feels so loud, but suddenly an argument erupts in my mind.

The other side finally feels empowered to speak because I kept pushing, although mentally exhausted, against the part of me that was convinced I deserve nothing. I told the quieter voice that it was okay if I messed up. That this doesn’t negate everything I have done that has helped someone, and yes, even if that was just one person. Even if it just helped me to get it out there into the universe.

Suddenly I feel a small sense of ease. I am tired from arguing with myself. I am tense from sitting in a tight ball with my jaw clenched this whole time. I unravel myself. I release my jaw. I inhale deeply and release more tension as I exhale. I choose to open up my laptop and write about what went on in my mind just now.

If you’ve ever felt this way, like nothing you do matters and it’s never good enough—like you have to do more or be more so people will notice that you matter and you’re good enough—here’s what I’d like you to know:

Marie Shanley, aka Mxiety, is a Twitch Partner and host of a mental health-focused talk show. She is also an author and medical program manager advocating with the goal of making mental health information accessible to everyone through expert and advocate interviews, open live discussions, and by sharing her personal story. You can find her at Mxiety.com and follow her on Twitter and Twitch.

How to Tame a Worrying Mind During Difficult Times

When You’re Confused About What to Do: How to Find Clarity